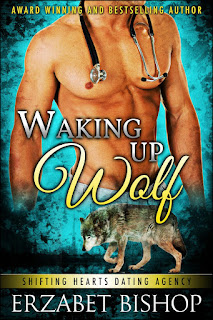 When danger meets desire, only the strongest survive.

Joanie’s dream has always been to give something back. Shubert, the kitty cat love of her life was her first rescue, and she was bound and determined to make volunteering at the Saving Furry Lives Shelter part of her reality. Joanie rescues a wolf pup and it bites her, setting off a chain of events she doesn’t anticipate. Appearances can be deceiving and some bites are much worse than their bark.

Dr. Royce Buchanan is a doctor tired of the dating scene. While the women he’s met through Shifting Hearts Dating Agency are lovely, he wants a mate to settle down with. So far all he’s found are a lot of clingy women with doctor fixations. He’s been burned one too many times before and prefers to get his kink on at Ventures, a local BDSM club catering to shifters. But when an injured woman shows up in his emergency room and his wolf goes on high alert, his safe world is about to go up in flames. Someone is gunning for shifters and to keep this new wolf safe, Royce might have to break his own cardinal rule and get involved, even if it could cost him his heart.

Tell us about your title featured in this set:
My title is called Waking Up Wolf and it has taken me about two weeks to write it. The title stems from a series called Shifting Hearts where shifters of all kinds find their mates.

Tell us something about yourself:
By day, I am a questionably mild mannered *snort* bookstore manager who lives just outside of Houston, Texas. I’m married with a pack of furry kids that rule my world. I write under three names, and under the Erzabet Bishop name I am an award-winning, international and bestselling author.

Tell us about your writing process:
My writing process starts with a legal pad. I make notes and from there go to a sticky pad. The plot points are then arranged and rearranged until the story flows the way I want it to. I also use Pinterest to capture the essence of what the story will become.

What is your favourite genre to read?
Paranormal romance, urban fantasy and contemporary romance. I also love teen books.

What would you say is the one thing you are most passionate about?
That is a tie between my writing and my dogs. My husband and I have made a home for several rescue animals and I believe very strongly in giving an animal a forever home and a place they can feel safe. I love my dogs like children, my blind muse of a pup, Taddy in particular.

My writing is a passion as well. I want to some day be able to write full time but that will only happen if I continue to push myself. Girl’s gotta have goals. J

When you are not writing, what do you like to do?
I love to snuggle with my puppy and read, watch Netflix (Walking Dead, Orange is the New Black, Breaking Bad…) I also love to try new restaurants with my husband when he can pry me out of my writing chair.

Thanks for having me on the blog today!
XOXO
Erzabet

Warmth pooled low in her belly, desire for the man in front of her derailing her already addled senses. Joanie blinked and tried to get a grip.

She’d just had a sex fantasy about her doctor and he was standing inches away from her.

Maybe she had fallen on her head. Hard.

She glanced away but as she did so, she caught the erection tenting Dr. Buchanan’s trousers before he shifted his white coat to shield it from view.

Maybe she wasn’t the only one affected by their close proximity. She didn’t go around sleeping with strange men, however, doctor or not.

But judging by the sizable protrusion, she could climb that bad boy and roost for awhile.

That would be some great physical therapy as far as she was concerned.

Trying to be serious, Joanie cleared her throat.

“And will you be, um, accompanying me for this physical therapy?” Joanie said slowly. All fantasies aside, she wasn’t going anywhere. Not until someone told her what the hell was going on. She watched enough true crime shows. People didn’t get taken out of hospital beds and loaded into SUV’s in the middle of the night without something very wrong going on.

At least, she thought it was night.

She eyed the cup on the bedside table. Did they put something in the water?

“No.” She shrank against the pillows, trying to make it as difficult as possible. God… where was the call button? She frantically searched the wall and tried to reach it. She struggled against them and Nina grabbed hold of her arm.

“Come on, Joanie. Cooperate, please. The man who came after you has friends. We need to get you and the others to safety before he comes looking for you.”

Man who came after me?

Why couldn’t she remember?

“Get out of the bed, or the nurse and I will do it for you.” Dr. Buchanan considered her, eyes blazing with challenge.

He was such an arrogant bastard. So why did she want to pull him on top of her and fuck him until they both couldn’t walk?

Gah. She was losing her marbles. One by one. Gone.

There. She said it again.

“Nina, get the sedative.”

a Rafflecopter giveaway
Posted by Erzabet Bishop at 8:00 AM