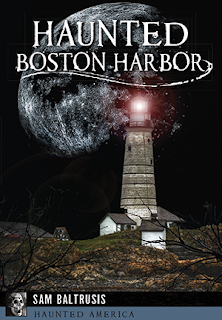 Ghosts lurk in the waters near Boston's historic seaport, haunting the secluded islands scattered throughout the harbor. Boston Harbor brims with the restless spirits of pirates, prisoners and victims of disease and injustice. Uncover the truth behind the Lady in Black on Georges Island. Learn about the former asylums on Long Island that inspired the movie Shutter Island, and dig up the skeletal secrets left behind by the Woman in Scarlet Robes. From items flying off the shelves at a North End cigar shop to the postmortem cries of tragedy at the centuries-old Boston Light on Little Brewster, author Sam Baltrusis breathes new life into the horrors that occurred in the historic waters surrounding Boston.

This is a great book if you want to get the flavor of haunted Boston. Pirates, inmates and many more haunt the darkened streets and abandoned buildings of this historic town.
5/5

THE BAD ROOM: Residential haunts in Malden and Somerville
By Sam Baltrusis

As the author of six historical-based ghost books, I hear all sorts of stories about alleged hauntings throughout New England. One of my readers, Michael Marciello, reached out to me about a haunting from his childhood home in Malden. As a kid, he called the off-limits haunted bedroom "the bad room.”

I got chills as he recounted tales of his father being pinned to the bed by an unseen force and sounds—he later described as evil and potentially demonic—echoing from a room that was unoccupied ... at least by the living.

His mother ended up putting a lock on the bedroom's door so he and his siblings would stay away from the paranormally active first-floor room."It was always so cold," he said, recalling the inexplicable temperature fluctuations in the bad room. "We thought it was an animal," he said, claiming that he would smell sulphur which is an indication of an evil entity.

When I posted Marciello's account on social media, sociolgist Michelle Willms talked about her version of a childhood bad room. "There was a room in my grandparents' house that was the ‘wicked room.’ It was my father's old bedroom and I don't see how he ever managed to sleep there," Willims explained. "It was always about 15 degrees colder than any other room in the house. I had a hard time even staying in the room by myself.”

Barbara Tolstrup, a lifelong resident of Malden and active member of the city’s historical society, interviewed me for her monthly show Malden Square on MATV. Like most typical New Englanders, she was initially skeptipical when we talked about the paranormal. However, she sheepishly opened up when I asked her if she ever experienced a haunting in her home that has been passed down several generations.

“I myself have been known to be sitting in the den and then see something at the corner of my eye through the double doors in the livingroom,” Tolstrup recalled. “I look again and there’s nothing there. This happens frequently.” Tolstrup told me that guests in her family her historic home have had similar ghostly encounters. She suspects it’s her grandfather or great grandfather keeping an eye on the family’s decades-old home. “It probably is a family member because the house has been in our family for a hundred years.”

As a paranormal researcher, I generally stay away from residential hauntings. Why? Because the phenomenon hits a little too close to home for me. I had my own experience with a “bad room” and it was my bedroom and office in a creepy old Victorian home on Hall Avenue in the Boston area.

While writing my first book, Ghosts of Boston: Haunts of the Hub in 2012, my sensitivity to what could be the spirit realm kicked into high gear. In fact, my old home in Somerville’s Davis Square apparently had a playful older female poltergeist with an affinity for scissors. One night, I invited a friend over who claimed to have some sort of psychic ability. He said that she was a seamstress and mentioned, without hesitation, the various things she did in the house to make her presence known.

While writing the book, an unseen force opened doors that were firmly shut. Lights mysteriously turned on and off without provocation. According to my roommate, scissors have disappeared and then reappeared over the years in the three-floor Gothic-decorated home. One night while I was writing into the wee hours on the Boston Harbor Islands’ Lady in Black myth, I noticed a gray-haired female figure wearing an old-school white nightgown and donning fuzzy slippers dart across the first floor. I ran downstairs and noticed that the closet door had been mysteriously opened and the lights had been turned on while I was upstairs hacking away at my computer. My roommate was out of town. No one else was there.

The poltergeist activity on Hall Avenue turned inexplicably dark around Halloween of 2012.

While writing my second book, Ghosts of Cambridge, I fled my room with a “boo!” in Somerville’s Davis Square. It was May 2013. At this point, the ghostly incidents escalated after the initial encounter.

While I was preparing for the launch party for my first book at Boston’s Old South Meeting House, the scissors sitting on the front-room table mysteriously started to spin, and one night, during an interview with Paranormal State’s Ryan Buell’s Paranormal Insider Radio, I heard a loud knock on my bedroom door. I quickly opened it, but no one was there. Oddly, the phantom knocking continued throughout the phone interview. I wasn’t afraid.

Months after I submitted the manuscript for Ghosts of Boston, a construction crew was hired to paint the exterior of the house. Apparently, the spirit I called “Scissor Sister” didn’t like the ruckus outside. What was supposed to be a month-long project turned into more than a year. The first crew of painters claimed that paint brushes would disappear and ladders would fall. One guy, tormented by a series of inexplicable incidents, asked me if the place was haunted. I sheepishly nodded, and I never saw him again. After a series of freaked-out painters, scaffolding from the top floor fell on my roommate’s car.

The gig was up. I decided to move.

Master psychic Denise Fix picked up on the spirit of the seamstress during our second interview. “She’s not trying to scare you. She wants your attention,” Fix said, sitting at a table that, oddly, was a repurposed Singer sewing machine. “She sewed for many people and felt quite tortured a lot of the time. She was celebrated by you, and she thanks you for that. She was released from whatever bound her there,” Fix continued. “And it wasn’t a good thing to be bound there.”

Two weeks later, I moved out. My last night in the house was memorable. My roommate’s exotic parrot escaped from its cage and perched on the oven’s open flame. The bird was quickly engulfed in flames but didn’t catch fire. The bird was unharmed. While carrying boxes down the stairs, I slipped. I felt something hold me back as I watched the box fall down the stairs. Glass shattered. It could have been me. I fled the haunted house on Hall Avenue and haven’t looked back … until now.

Peter Muise, a friend and fellow History Press author, posted about a bizarre cryptid encounter from the 1980s on his blog New England Folklore here.

“A young woman named Karen bought a Victorian-era house outside of Somerville's Davis Square in 1983. She liked living there, but there were a few things that seemed a little odd. The basement often flooded, which was annoying, but Karen suspected that something else was going on,” Muise wrote.

“She often felt uncomfortable near the back wall of her house, particularly on the second and third floors. She kept her spare clothing up on the third floor but got such weird vibes that she did not go up there at night. She had tried sleeping in the back bedroom on the second floor, but did so only briefly because she felt uncomfortable there as well. She felt that there was something in the room with her at night,” he continued.

Karen was featured in The Ghostly Register by Arthur Myers."I had a feeling of a presence at night, of its being almost like an an animal, as though it had claws or wanted to bite me,” she recalled.

According to The Ghostly Register, Karen and her roommate reached out to a Cambridge psychic who said the poltergeist-like activity wasn’t a ghost … but a troll.

“The troll was apparently connected with an underground spring that ran under the house and that caused the basement flooding,” Muise explained. “When the house was built on top of the spring the troll became trapped and would send its energy up along the back wall of the house. Karen had always felt its presence in the house, but the troll increased its activity once the roommate moved in and started to sleep near that wall.”

The troll supposedly revealed himself during the ritual and begged Karen to let him stay. She asked the cryptid to leave and the troll haunting and basement flooding mysteriously stopped.

However, did the troll have any ties to my paranormal encounter in 2012? After reading Muise’s post, it turns out the troll incident was literally across the street from old home on Hall Avenue.

“I am so curious where in the Davis Square area this happened. I lived in a Victorian near Davis Square and had what we believed to be a poltergeist who had an affinity for scissors ... maybe she was a troll?” I joked online. However, Muise’s response made my jaw drop.

“According to Myers the troll house was 35 Hall Avenue. It’s weird there is so much strange phenomena on one street,” he responded. I gasped. My old home on Hall Avenue was a stone’s throw to the troll incident from the 1980s.

Muise suggested that maybe the troll just moved across the street. Or perhaps Karen was experiencing poltergeist activity and somehow mistook it as a mythical monster. For the record, there was a movie called Troll that came out around the time of this alleged cryptid encounter.

Did whatever Karen and her roommate experience in the 1980s somehow set up shop across the street? In hindsight, I believe it did.

Sam Baltrusis, author of Ghosts of Boston, Ghosts of Salem and 13 Most Haunted in Massachusetts, is the former editor-in-chief of several regional publications including Spare Change News, Scout Somerville and Scout Cambridge. He has been featured as Boston's paranormal expert on the Biography Channel's "Haunted Encounters," and he is also a sought-after lecturer who speaks at dozens of paranormal-related events throughout New England.

a Rafflecopter giveaway
Posted by Erzabet Bishop at 4:30 AM