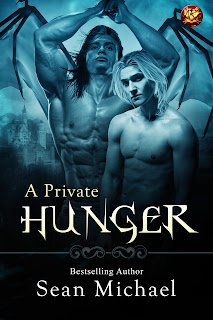 What happens when you find out the man you’re in love with is actually a dragon?

Matthew is taking a break before going to university, working at a cafe in Seattle. He expects to spend a few months meeting people, having fun and generally living it up before hitting the books. Then he meets Drakon, a passionate, masculine man with an animal magnetism that draws Matthew in.

As Matthew moves in with Drakon on his country estate and slowly finds himself cut off from the world around him, he begins to wonder if that animal magnetism is more literal than figurative and if Drakon would be more aptly named Dragon.

Will Matthew stay with the man he’s growing to love once he discovers Drakon’s long-lived, carefully guarded secret?

Excerpt:
He grabbed the coffee cups off the table, whistling low and easy. His hips were still sore from last night’s dancing, but it felt good, fine, a sweet burn.
Jennie popped his ass as she walked by. “You’re too cheerful for words, Matt-baby. You get laid last night?”
Matt shook his head, red curls falling into his eyes. “Just dancing, Miss Thing. Just boogying.”
She laughed and headed on, coffee pot held tight in her hand.
Two men came in together, one older, distinguished looking. Like a British butler, really. The other was tall, striking, with hair like a mane, dark gold surrounding a golden face and falling down the man’s back.
They sat at one of his tables.
Fucking hot.
He headed over, two menus in hand, telling his jumpy prick to behave. “Afternoon, guys. I’m Matt. Can I get you some coffee? Tea?”
“What about you?” asked the hot one.
Matt blinked, blushed dark, and then recovered with a grin. Flirting. He could do flirting. “I’m working and not on the menu, sadly enough.”
“I guess I shall have to settle for tea, then. I don’t suppose you have something wild and strong?”
“We’ve got a nice blackberry and black tea.” He craned his neck, looking at the specials board. “And another from South America that people seem to like.”
The man growled, actually growled, looking discontentedly at his companion.
“I would be happy to drive you home and serve you what you want, Master Drakon.”
The growling stopped, the hot guy’s mouth twitching into a half smile. “I am most certain that you would not, Wetthers, though you are right, we have better teas at home.”
“Master Drakon” turned back to him, and Matt realized that one of the man’s eyes was brown, the other blue. “How much are they paying you to serve here?”
“Excuse me?” He blinked again. What an odd man.
The man’s eyes narrowed and he asked the question again, enunciating each word very carefully. Matt noticed he had an accent, just barely there. “I asked you how much are they paying you to work here.”
“I heard you, sir. I was just making sure I heard you right.” Rude asshole. “I make minimum wage plus tips, same as every waiter in this town. Are you always this ill-mannered or am I just really lucky?”
To his surprise, the man laughed, the sound low and rich. “Oh, you are a feisty one. Go tell them you have been employed elsewhere and we will leave for my estate immediately. I shall double your salary and of course room and board shall be included. Wetthers will settle all the pesky details with you and the IRS as necessary.”
Matt looked over at the old guy. “Is he for real? I mean, dude, you need a waiter at home?”
The old man seemed quite unperturbed by the goings on. “Master Drakon has made you an offer, young man. If you wish to accept it, I can assure you that it is ‘for real.’”
“Look, I’m not an idiot or a whore. You come in and tell me to quit my job and come with you without so much as sharing names, or you knowing more than I can walk and read a chalkboard.” He shook his head, fingers moving to his side, his skin burning. “I’m flattered, but no, thank you.”
The hot one—Drakon—growled again and stood. “Well, if you change your mind and decide you want to know about the handprint on your ass, maybe I’ll be willing to see you.” Drakon patted his ass, but not right on, more to the side where his birthmark was. With that, the man walked out.
The man named Wetthers handed Matt a card with a stylized dragon on it and the words Drakon Estates. There was a number beneath it. “If you change your mind. Be very sure before you call.”
“Right. Thanks.” He watched the guy leave and shook his head. “Fucking weird. You see that, Jennie? That dude just propositioned me!”
“Weird.” Jennie shook her head. “Glad he left before your shift was up. I hate waiting on assholes.”
“Yeah.” He nodded and pushed the card into his pocket. Real weird.
Guess he’d have to go dancing tonight to work off the memory.
Whistling, he went back to doing his side work, mind filled with music. 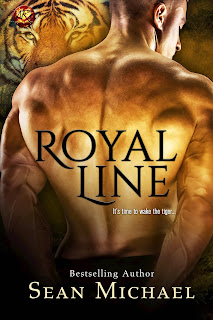 Where’s the common ground between a tiger shifter foot soldier and his prince?

Grio has one job—find dormant tiger shifters and introduce them to the world of Saffron Tigers. When he finds Professor Phoenix Lamoure, he discovers that Headquarters got a couple of key points wrong. Phoenix isn’t actually a professor but Saffron Tiger royalty…a member of the lost royal line.

Phoenix didn’t have things easy growing up. His mother spent most of her life in a mental institution, and he spent his formative years in foster care. When a stranger approaches to learn about his family history, he’s wary. When said stranger actually kidnaps him, all bets are off!

Can he ever believe what Grio says? Or will he be forever convinced that he’s as crazy as his mother was?

Excerpt Royal Line :
Grio sat in his SUV, splitting his attention between the students walking across the quad and the file in his hand.
Professor Phoenix Lamoure. Actually, the guy was a TA, not a professor.
He was going to have to ride Danny next time he spoke to the man. It wasn’t often that the office sent out incorrect information, and he made the most of it when they did. Of course he’d rib Danny privately. No need to get him in trouble with the boss. Nigel didn’t have much of a sense of humor.
Phoenix Lamoure was a tiger shifter like himself, even if the man didn’t know it yet. A lot of shifters remained dormant and died never knowing what they really were.
The Saffron Tigers, though, they were nearly extinct, so they didn’t have the luxury of letting their kind discover themselves, or not. Headquarters searched out potential weres and Grio—or Janey or Tuplo—were sent to flush them out.
Grio looked at the file again, examining the black-and-white image closely to make sure he’d recognize Phoenix when he saw the man.
There were only one hundred and nineteen Saffron Tigers left and they needed numbers, needed safety. Needed each other.
Phoenix wasn’t your typical Saffron Tiger. Instead of bulk and broadness, he was slender, the little wire-rimmed glasses perched on the end of his nose adding an air of fragility or delicateness that Grio imagined was quite false. Knowing it or not, if Phoenix had tiger blood in him, he would be fierce when he had to be.
A small group of students walked by, a shock of unmistakable bright red hair hitting his eyes. Jesus. This one wasn’t just a Saffron. He was descended from the royal line.
How had he missed that? He checked the file again. Grainy black-and-white photo from some old high school yearbook. No wonder. Not only that, the file made no mention that this one was a royal.
Slipping out of the SUV, Grio closed the door silently, then quietly stalked his prey.
The two girls in the group of six headed off toward the parking lot, and he heard, “Nixie? You want to grab a pizza and a beer?”
“I don’t know. I have papers to grade…”
Grio considered his options. He could follow Phoenix to somewhere quiet, or he could “bump into” the man now.
“Come on, man. All you do is work,” wheedled the young man.
Phoenix gave a snort. “If you were Dr. Lee’s TA, you’d work, too.”
Dr. Lee. That was more information than Grio’d had a moment ago. He decided to wing it.
“Excuse me, did you say you were Dr. Lee’s TA?”
“I did, yeah.” Eyes that were pure gold met his, warm behind the wire-rimmed glasses. “Can I help you?”
“Yes, I had a few questions for you. Is there somewhere we could go and talk?” Grio gave Phoenix his best and most earnest smile. 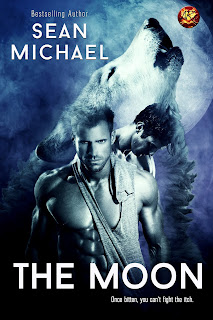 The first full moon is always the hardest.

Danny McMann has been busy on pack business for weeks and just wants to spend the upcoming full moon deep in the woods with his pack—running, hunting, napping and generally goofing off. The last thing he wants to hear is that they’ve got another man on their hands who’s been bitten and about to turn with the arrival of the full moon.

Hammond Argyle was bitten by his assailant in a bar fight a few weeks ago. He’s been in a foul mood ever since and it’s only getting worse. As is the way his skin itches and feels like it doesn’t fit him anymore. When someone starts lurking round, following him, it’s about all he can take.

Will Danny be able to help Hammond through his first change and beyond?

Sean Michael is a master of his craft and I loved each of these books. His characters leap from the pages and practically breathe. The smexy tension is enough to scorch your e-reader and keep you up waaaaay past your bed time. *grin* You won't go wrong with these books if you enjoy mm romance.

Best-selling author Sean Michael is a maple leaf–loving Canadian who spends hours hiding out in used bookstores. With far more ideas than time, Sean keeps several documents open at all times. From romance to fantasy, paranormal and sci-fi, Sean is limited only by the need for sleep—and the periodic Beaver Tail.

Sean fantasizes about one day retiring on a secluded island populated entirely by horseshoe crabs after inventing a brain-to-computer dictation system. Until then, Sean will continue to write the old-fashioned way.

For more information on other books by Sean, visit www.seanmichaelwrites.com 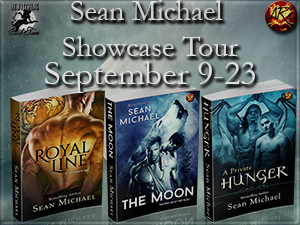