A Wicked Halloween Blog Tour and Giveaway: Cecilia Dominic with A Million Shadows

Halloween can't get here soon enough! Especially when we have this tantalizing boxed set to look forward to.

A Wicked Halloween ~ 13 **BRAND NEW & EXCLUSIVE** paranormal romance tales that will thrill and chill you just in time for All Hallow's Eve. 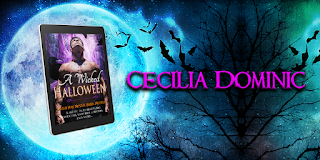 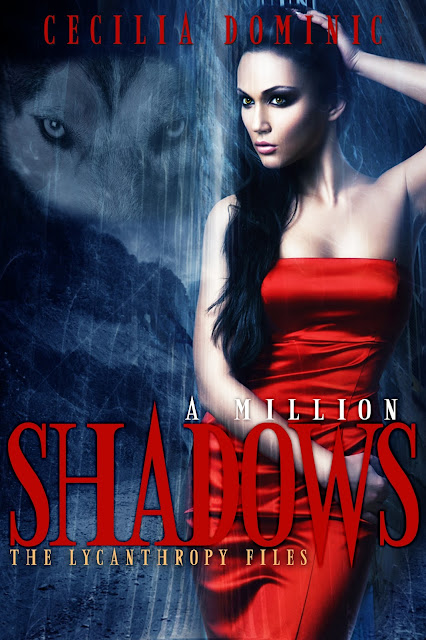 Hey, y’all, I’m so excited to be here! I was told I needed to figure out five favorite things, so I decided to try and do something a little bit different than the usual. So, here we go:

Favorite meal of the day – lunch!
Perhaps as a child I was influenced by Weird Al Yankovic’s early classic “Girl Just Want to Have Lunch.” It’s the perfect meal of the day. Don’t feel like real food? Have breakfast, call it brunch, and claim to be all fancy on Instagram! Can’t decide whether you want to have caffeine or alcohol? No problem – have both! No one’s going to be judging you unless you’ve brought beer into McDonald’s. And hey, if you have brought beer into a fast food joint, I salute your determination to embrace the noncommittal nature of this meal, especially if you then order breakfast.

By the way, I really like breakfast, too, and I’m not above having a mimosa whenever I can.

Favorite weather – bring on autumn!
If you live in the Southeast U.S., you know it’s been a really hot summer, even for us. I have naturally curly hair, and it has its own ideal range for humidity separate from the rest of me. This summer has definitely tightened my curl to its limit. The funniest was after going for a long run in Florida on a recent vacation. Yes, my husband convinced me to go on a long run while on vacation. I’ve never seen my hair curl as tightly as it did that morning. If I’d been wearing a hat, it would have popped off. Ugh, that was miserable – blazing sun, humid as anything, and no breeze.

Oddly my favorite weather still involves a lot of moisture in the air. I love cool, cloudy days with a breeze and the occasional mist. It’s perfect for all of my favorite things – napping, writing, reading, napping, drinking warm or alcoholic beverages while watching the mist, napping, and sometimes running if I’m in the mood for it. I missed my geographical calling – I should’ve moved to the Pacific Northwest.

Favorite thing to procrastinate with – playing around with graphics.
I almost said Facebook, which is connected, but I’ve been trying to not let unnecessary negativity into my mental space. So, graphics! I think they relax me by allowing me to use a different part of my brain. I live in the world of words for both my careers, so it’s nice to get a break and do something different.

Why don’t you see more graphics from me? Well, I didn’t say I was good at them. I’ve just gotten a trial for Illustrator. Wish me luck. I may disappear down the Adobe rabbit hole and never emerge. Deadlines, what deadlines?

Favorite kind of pen – anything narrow and ball-point.
I thought I’d stick something writerly in here. I love the Pentel RSVP pens, specifically the narrowest ones. They’re great for writing and doodling, which I do during webinars and lectures but not client sessions. I can’t doodle during session – I use electronic health records, which makes it hard.

My husband asked me once if I write my novels during session while pretending to take notes. I told him no, but really, would I admit it if I did?

As for why ball point, I just can’t do the felt tip thing.

Favorite sport – sleeping.
As you’ve probably guessed by now, I love to sleep. If you don’t think sleeping is a competitive sport, you’ve never been at my house on a Sunday morning. No, I’m not inviting you for brunch, although I’m sure that would be lovely. I don’t typically watch sports, and if I’m going to compete, it’s going to be something I’m good at. I’m a reluctant runner but a champion sleeper.


And if you do show up for brunch on a random Sunday morning, I won’t make fun of you for being pretentious. Just don’t come over too early, and be sure to bring mimosa fixins. It’s hot out. 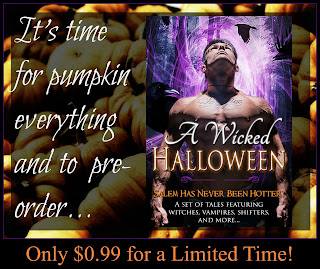 Former model and heartbreaker Kyra Ellison is accustomed to making trouble, not being on the receiving end. When she’s kicked out of her family’s Ozarks cabin where she's been taking refuge - okay, hiding - after a wicked ancient syndrome wrecked her old life, she's forced to go to Salem, Massachusetts. Yes, that Salem, where a murder, witches with secrets, and handsome billionaire make danger irresistible. Kyra finds she's not the only one with secrets and skeletons in her family closet, but some are more deadly than others. A confrontation with ancient danger and a new foe forces her to choose between the old life she's been craving and the new love that might make everything worth it in the end..

A moonbeam found its way through the blinds and speared me awake at around three o’clock. I rolled away from it, but my movement was echoed by a thud downstairs. I sat, all senses alert, and heard a scratching sound like boots scrabbling in sand.

I pulled the T-shirt I’d slept in over my head just before my hands curled into paws. My fingernails turned into claws, and the change came on from my extremities. It felt like I curled inward and folded into shapes no human body should endure. The fur itched as it pushed through pores I hadn’t had before, but I couldn’t control my paws enough to scratch it.

The final thing to change was my face, and that was the worst sensation, of someone taking my nose and pulling so hard it brought my skull with it.

Then the pain stopped, and a sense of strength, grace, and deadliness unfurled like a flag in my middle and filled me with purpose. To my wolf eyes, the room seemed awash in daylight—not moonlight—and my lips curled.

There was an intruder in my house, and I wanted to tear him or her apart.

No tearing apart, I reminded myself. Not unless I want a visit from that nice policeman later.

I jumped off the bed with as little noise as possible and slunk into the hallway and down the stairs. My fur was the same color as my hair—almost black—so I knew I would blend into the shadows.

Whereas the sulfurous smell had dissipated to my human nose, it was still very strong and present to my wolf nose. But that wasn’t what made me stop, all fur on end, when I turned toward the front hall. The sand I had stepped in glowed an opalescent blue, and I saw it was in a circle shape about three feet in diameter. I could see the panes of the front door through the ghostly figure that struggled in the middle of it.

My wolf brain, eminently practical, noted that I couldn’t do anything about a ghost because it wasn’t solid enough to be afraid of me, so I should just turn around and go back to bed.

But then I heard my name.

My ears perked up, and I moved closer, sticking to the darker patches. Why was the ghost calling my name? Was it a deceased family member visiting for the Festival of the Dead? What was I supposed to do about it?

The ghost pushed against some sort of invisible barrier. When I got close enough to make out its features, I gasped, which came out as a canine huff.

Jared Steel was the ghost trapped in the circle.

“What are you doing here? Are you dead?” I didn’t know if he would hear my mental voice, but he spun around.

“I’m right here. It’s nighttime. Why are you here in my parents’ house? Are you dead?”

“No, I don’t think so. I think I’m dreaming.” He looked at his hands and grew more solid. I moved out of the shadows to sit in front of him, and he tried to back up, but he bounced against the back of the circle.

He looked so bewildered I wasn’t sure whether to laugh at him or comfort him. I still didn’t know whether he was dead, but I suspected not. If some wolves could spirit-walk, then I supposed some humans could, too.

I did want to know who had made a binding circle in my foyer, but I guessed it wasn’t my confused astral projection house guest.

And if he was projecting while he was asleep, I could have some fun. My instincts told me he didn’t realize he had this ability and would just write all this off to a strange dream in the morning.

As he came more into view, his attire resolved itself into shorts and a tight-fitting T-shirt that hugged the muscles of his upper arms, shoulders, and chest. Dark hair showed above the rim of the v-neck collar, and I licked my lips at the sight of his lightly fuzzed and nicely shaped legs.

Yes, Jared Steel was quite nice out of his work clothes, and I found myself disappointed that he didn’t sleep naked.

Cecilia Dominic wrote her first story when she was two years old and has always had a much more interesting life inside her head than outside of it. She became a clinical psychologist because she's fascinated by people and their stories, but she couldn't stop writing fiction. The first draft of her dissertation, while not fiction, was still criticized by her major professor for being written in too entertaining a style. She made it through graduate school and got her PhD, started her own practice, and by day, she helps people cure their insomnia without using medication. By night, she blogs about wine and writes fiction she hopes will keep her readers turning the pages all night. Yes, she recognizes the conflict of interest between her two careers, so she writes and blogs under a pen name. She lives in Atlanta, Georgia with one husband and two cats, which, she's been told, is a good number of each. Her debut novel The Mountain's Shadow, an urban fantasy featuring werewolves with a scientific twist, was released in October 2013, the sequel Long Shadows will be out in March 2014, and she has been offered a contract by Samhain for the third in the series, Blood's Shadow. She also writes young adult fiction and won the 2011 Mystery Times Ten contest through Buddhapuss Ink with her YA fantasy mystery The Coral Temple.