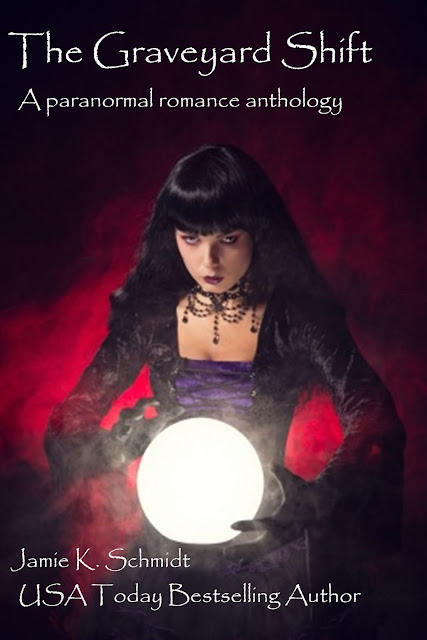 In this anthology, you will enter an adult bookstore run by two vampires and partake in the bloodletting and sex, see a witch accidentally summon a vampire who gains power through love making, and then go clubbing with an urban vampire.

But vampires aren't the only supernatural beings in this compelling collection of stories. Ghosts jam with their favorite rock bands. A Grail Maiden helps protect Arthur's cup, and a paralyzed cyber mercenary finds love inside virtual reality.

This book was a hot paranormal dance of danger, sensuality and the perfect read for an autumn night perched in bed with a cup of pumpkin tea.

DEIRDRE WAS A EUROPEAN PRINCESS whose lineage, no one dared question too closely.  She kept close companionship with Viola, a dark Countess of equal renown and deadly beauty.  In a time where the night was feared, they flourished and fed at all the best parties of the nobility.
The Princess was as fair and fey as a moonbeam with silver hair and cerulean eyes.  She lived for excess and to play with her new found friends.
The Countess was the opposite side of the coin.  With raven locks and soulless black eyes, she was a lithe viper who struck quickly and gleaned minions from the throngs of addled noblemen.
But good times always end, even for immortal royalty and when the church's mercenaries, The Prophecy of the Eye, became too interested in the beautiful thralls encircling the Princess and the Countess, the parties suddenly stopped.
This cycle continued for many centuries.  Deirdre and Viola graced Czarist Russia, continued on to Gay Paris and finally to the New World in gin joints and sleazy jazz dives of the Big Easy.
While America lacked the polished old world charm and the distinct respect for one's betters, it also provided more of everything else, from money and thrills, to gambling and illegal liquor.
Its wide terrain allowed the Princess and the Countess to move from state to state until technology caught up with them and they learned the value of keeping a low profile.  They were able to exploit the innocence of the forties and fifties, but were swept away into a drunken frenzy of Free Love.
By the late seventies, they reached a rhythm that was blown away by the "Me" generation of the eighties and the cynical creep of the 90's that exposed the world's monsters in vivid detail across television screens and eventually the Internet.
Now in the new millennia, there is nowhere to hide and no other frontiers to explore.  They found out the luxuries of the day could be gone in an instant.  Swiss bank accounts could be seized and the Princess and the Countess could be among the nouveau poor, scraping their living feeding off homeless and runaways.  They have become merchants, biding their time and hoping for another renaissance of excess.
An ignoble end for two from the finest Carpathian bloodlines.
Perhaps a fitting end some may say, for however pretty the monsters are, they are still creatures of the night— or from hell as the church's mercenaries proclaim.
The church's vanguards have also migrated from Europe. And like the Princess and the Countess, they have morphed and remade themselves to fit the times.  Always hunting, they are similar to the women they chase, although they would balk to see the comparison.  The church mercenaries seek to destroy magic and any evil that lives outside their doctrine.
Whether their victims deserve their fate or not is irrelevant.
It was so much easier for both during the simple times, where murder was accepted and random acts of violence and carnage need not be explained for helicopters with news teams or amateur videographers.  They've learned a new dance for the modern world and it is kept to a very fine line.  Like the sword of Damocles, the truce poises hair thin.  It is not a matter of if that strand will break, but when.
And darkness save the innocents caught between.

I swore I was going to do it. And this time, I meant it. He had finally gone too far,
pushed my last button, and said the unforgivable.
“When I married you my dreams died.”
The fight ended quickly after that. In the vacuum silence of words that can’t be taken back, he looked as stunned as I felt. But he put up his chin with false bravado and waited for my one-two riposte. I merely left the room.
The apartment shook when he crashed the door open. He peeled out of the complex driveway in a puff of smoke and burned rubber. A huge belch came from the living room and the stench of burning sulphur wafted into my study. I came out to investigate. My husband’s words had summoned forth a creature that was too small to be a demon, too malevolent to be an imp. The creature was straddling the couch. Its
yellow eyes were narrowed at me. It hissed, showing pointy teeth. I crept closer and it swiped out at me, its bony arms like broomsticks. His scissor bladed claws cut the sleeve of my robe. I backed away, threw a pillow at it. It caught it and shredded it into confetti. What was warlock born could not be witched away but it also could not harm me. I hissed back at it and cast a protective spell around my cat, whose back was arched like the letter A.
Three days of silence passed. My husband was grumpy and sullen, rattling the paper and slamming dishes to fill up the emptiness and the quiet. I moved like the walking wounded. There was a hole in my soul where happiness once lived. I was numb.
The creature would appear and disappear. Always watching, never attacking us. It
played with itself, picked its nose. But for the most part was content with existing in the silence of our world. If my husband noticed it, he gave no sign. I ignored it.
After a week, things gradually started returning to normal. I still pretended to be asleep when he came to bed, when I wasn’t in my office all night staring at the world map and wondering if anyone out there hurt as much as I did. We didn’t talk, but I found I could meet my husband’s eyes. I saw no apology in them, but I really didn’t expect to. The creature faded slightly, became translucent.
But as I became angrier at the unfairness, the creature fed on my emotions. As I thought, “Did he think that he was the only one who sacrificed, compromised?”, it solidified again. Its teeth and claws elongated and curved into Kris daggers. The creature followed me around and would preen when I clenched and unclenched my fist.
Back in our routine, my husband would go to work and come home. I stopped making supper or cleaning the house. He could do his own laundry and fend for himself. I made phone calls and robotically did what I had to do. He would stay in watching television or stay out late in bars. I didn’t care either way. The creature would curl up on the couch beside him or swing from the drapes, depending on our moods.
Today, I heard my husband in the shower and I walked over to the window of my study and laid my forehead against the window pane. The sensation was like eating ice cream too fast and I had a giddy recollection of summer time. The door slammed and jolted me away from tire swings and seagulls. I sipped my coffee as I watched him get into his car and drive to work. He never looked up. I wonder if he even thought of me.
The creature plastered its tongue on the window, making huge streaks. Shortly after ten, the movers arrived. I sat on my kitchen counter and watched them professionally pack up my things. The creature, hidden by my invisibility spell, danced around them and jumped from box to box.
“No, that stays.” I said when they started towards the TV set. I directed them to my office and went back to my perch, slowly stirring a head ache relief potion.
The movers were expensive. But if I had to carry box after box into my car all by myself I never would have left him. It wasn’t the first time, I sat contemplating leaving. I would grab a handful of clothes from the closet and got as far as the bed with them. I’d sit and wonder if I should donate most to the Salvation Army before packing. Then I would chide myself for giving up. And I would talk myself into staying. It was harder to leave than in was to stay. We had been playing at being happy for a long time.
I received my power from my dreams and prayers. If I had made him impotent by
marrying him, then I could rectify that by leaving him. I picked up my cat and my purse and walked out to the car.
When my husband came home tonight, I wanted him to see the living room as it always was. He wouldn’t notice that my books or my knitting would be gone. Maybe he’d watch TV for a bit. Maybe he would go into the kitchen to raid the leftovers or to pop a frozen dinner in the microwave. He wouldn’t notice my coffee mugs were missing or that my teapot collection had been lovingly removed.
But he would see the creature, formed out of his belligerence and sustained by our
negative emotions. I looked up from the parking lot to see it rubbing its butt cheeks against the study windows. They would make a good couple.


a Rafflecopter giveaway
Posted by Erzabet Bishop at 4:30 AM