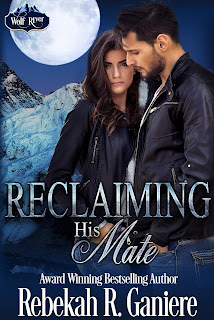 Griffin has tried to move on since his separation from his mate Dakota– but that’s easier said than done when your inner wolf refuses to let go of his soul bonded mate. Now in pre-med school and dating a human doctor he’s ready to put his past behind him and look toward the future. Or so he keeps telling himself.

Dakota has been living in hell since she made a horrible mistaken when Griffin was overseas. Thrown to the curb the moment he got home she’s spent the last year getting clean and sober and trying to pick up the pieces of her disastrous life. But what she really wants is the man she’s never gotten over.

When a fateful accident puts Dakota in trouble the only person she can turn to is Griffin. Forced to allow her back into the home they shared as man and wife, Griffin finds himself torn between the memories of her betrayal and his desire to get her back in his bed. But Dakota’s secrets do deeper than Griffin can imagine; and when the fog clears on their steamy reunion one of them will find that the betrayal that tore them apart, was really their own. 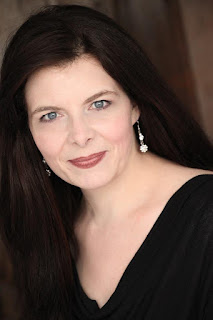 Rebekah is an Award Winning Bestselling Author. Her debut novel Dead Awakenings, hit the bestseller list on release day. Her Fairelle Series, released in 2014 and has won several awards including the Golden Palm and a finalist for Rone Award as well as Best Fantasy Series of 2014 from the Paranormal Romance Guild. Her trilogyThe Society was released by Kensington and her new series Shifter Rising is released in 2016. Rebekah is a prolific author releasing upwards of five books a year and is currently working on six different series.

Rebekah is the President Elect of the Fantasy, Futuristic & Paranormal Chapter of RWA as well as a member of several local and online chapters. In her spare time when she isn't writing you can find her teaching on SavvyAuthors.com or at RWA. Rebekah is also known for her elaborate cosplays with her family and has been a guest speaker and panelist at San Diego Comic Con, Wondercon, Salt Lake Comic Con, Long Beach Comic Con, Comikaze and several other Comic Cons on the west coast as well as LTUE, Romantic Times Convention, RWA, InD'Scribe, Genre LA and Authors After Dark.

Thank you for this opportunity to talk about my new release 'Reclaiming His Mate' and help my readers get to know me better.)

Tell us about your title featured in this set:
The book is the first of five books in the series and I love for my titles to match. I thought about what the book was about, a werewolf trying to deal with past hurt and betrayal in his marriage and realizing he still loved his mate and wanted her back. So the title seemed to flow naturally from that theme.

Tell us something about yourself:
I live in Los Angeles, CA. My husband is a Television and Movie Producer and two of my four children are actors in Hollywood. If you've ever seen the Subaru commercial with the little blond boy driving the car and getting a parking ticket and dropping his groceries, that's my baby boy. I am a huge geek at heart. I love everything Star Wars, Marvel, DC, Star Trek and Fantasy. I cosplay with my family at over 5 Comic Cons a year where I speak. I've gotten pretty good at foam armour this year and next year I’m going to tackle even more elaborate cosplays. We'e gone as Star Wars, Steampunk Alice in Wonderland, X-Men, and this year we are DC Villians and Heroes.

Tell us about your writing process:
My process is different. Something will strike me out of nowhere and I'll think, that was be fun to write. A cowboy in space. (My current WIP) Then I jot down a small summary, maybe one page. From there I think about the characters I need and then I write a 20 chapter outline. Some chapters are no more than one sentence. Finally, I start writing. I don't plot out too much, I let the writing flow where it wants to go. It takes me about a month to write a book, but then 3-6 months up to a year to edit.

What is your favourite genre to read?
Paranormal Romance and Fantasy Romance. Though I do love YA and sci-fi as well.

What would you say is the one thing are you most passionate about?
My family. I love my 4 amazing kids and my husband and my 2 dogs, 2 tortoises and bearded dragon. They are everything to me.

When you are not writing, what do you like to do?
Hang with my kids. I home school them. Watch movies, read, sew, go out to lunch with friends. Go to Comic Cons. Boring stuff.

If someone who hasn’t read any your books asked you to describe your story in this set (the elevator pitch!) what would you say?
After a fateful accident throws estranged mates Dakota and Griffin back together, they must decide whether to forgive each other and give in to the passion that still burns between them, or walk away and lose the love of their lives forever.

Thanx for coming out and meeting me today! I hope you enjoy Reclaiming His Mate and Comin in Hot! Have a great week!

Dakota washed her body, wrung out her hair and stepped out of the shower. Wrapping the towel around herself, she realized she’d gone in without any clothing. She opened the door to find Griffin standing at the dresser. He turned and his eyes widened slightly.

“I’m sorry. I didn’t realize you were in here.” She started to close the door.

“No, it’s fine. I just wanted to grab a sweatshirt.”

She opened the door again and stepped out. His gaze raked up and down her barely covered form. She swallowed hard and wrapped her arms around herself.

“My… uh… underwear is in the top drawer.”

“Huh? Oh, yeah.” He opened the drawer and pulled out a white lacy thong with the tags still attached. “I uh… I mean… these are uhm… nice.”

Her cheeks heated as he crossed the room and held it out. Her fingers slid over his while taking it from him. He ran his thumb over her knuckles and tingles shot up her arm. Warmth spread inside her and he took a step forward. She backed up and hit the wall.

His fingers still cradled hers and she swallowed hard. He stopped inches from her; his body radiating so much heat, she wondered why he needed a sweatshirt.

His hand ran up her bare arm raising goosebumps on her skin. She stared at his hard chest, unable to move. Fear trickled down her spine. It’d been a long time since she’d let anyone touch her. Sure she let friends hug her, but that was all. Alarm bells rung out in her head and she fought a sudden wave of nausea. This was Griffin. Her Griffin. Images flashed into her mind but she locked them away.

He leaned in and smelled her hair. A rumble escaped his chest that made her knees go weak.

He pushed her chin up, making her look at him. Her heart pounded like a drum circle beat at the yearly Pow Wow. She was okay. She was in charge. She could stop any time she wanted to.

A tear leaked from the corner of her eye and he brushed it away with his knuckles. He loomed closer, his lips mere inches away. The fragrance of his skin, so familiar it was like it was a piece of her. She wanted to feel his lips on hers. To feel his weight on top of her.

No. They couldn’t. If they went there again, she would lose all control and everything she’d fought to become over the past year.

His lips danced softly over hers. Tingles lit up her spine and her wolf howled and then roared to life. A dominant scent rolled off Griffin and she pressed her lips to his, sucking in his warm breath. His taste sent a ripple of need coursing through her. Sensual memories flooded her. The feel of their bodies joined. Making love under the stars the first time before he’d gone to boot camp.

Griffin ran his hand up her leg to her hip and grabbed onto her. His lips parted and he coaxed her tongue with his.

But her resolve broke and she leaned into him. Every line of his body so familiar it was like going home.

He cupped her face with both hands and she dropped her panties then wrapped her arms around his waist. He kissed her with long languid kisses, just the way she liked them. He placed kisses over her cheek and down her neck, stopping just below her earlobe. She sucked in a sharp breath and grabbed his firm rear. He leaned against her harder, and even through his clothes, she could feel he wanted her.

“Dakota. I’ve missed you so much.”

a Rafflecopter giveaway
Posted by Erzabet Bishop at 3:30 AM