The Eyes of Bast 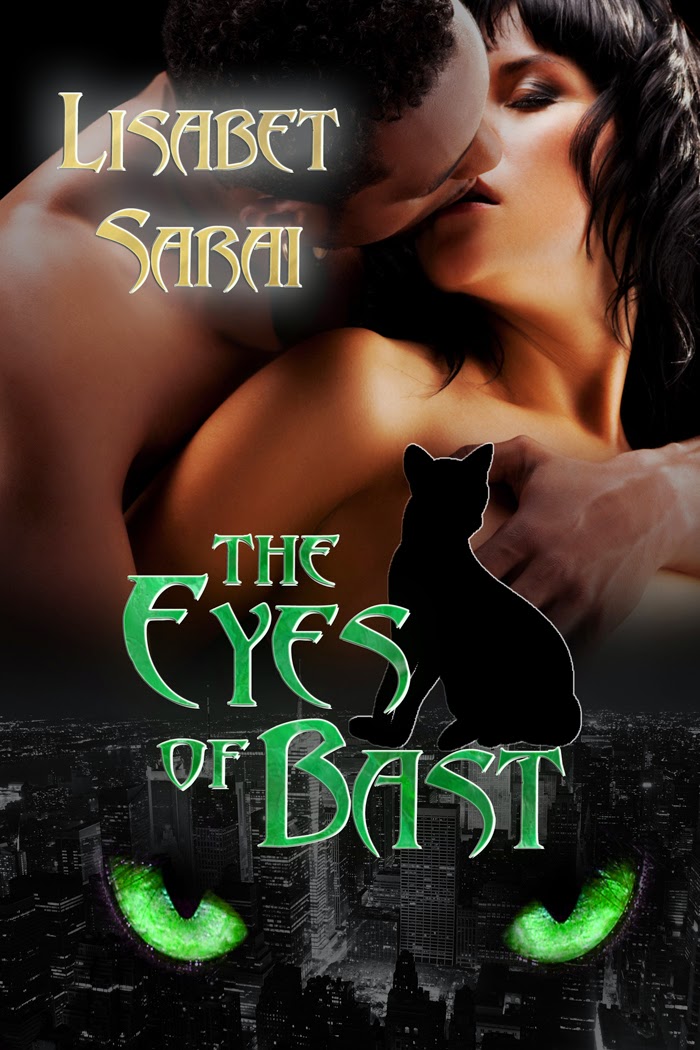 Shaina Williams' grandmother bequeathed her that wisdom, along with a old pendant from the Islands, carved from an ocelot's tooth. When instinct tells Shaina to visit the feral cat trap she'd set in Central Park, she listens to that inner voice, She discovers she's caged a magnificent black tom, but the cat inexplicably vanishes after she tends to his wounds. Seeking the errant feline, Shaina encounters instead a handsome stranger whose slightest touch sets her body on fire. As the day dawns after a night of ferocious passion, her mysterious lover is forced back into his true shape - the tomcat she'd rescued.

Born a cat, Tom was transformed into an unwilling shape shifter by a sorceress who craved a human plaything to satisfy her perverse lusts. Centuries old and irresistibly powerful, Delphine Montserrat will stop at nothing to find her runaway familiar. Shaina vows to do whatever is necessary to defeat the vicious but seductive witch and save the man she believes is her soul mate – even though it might mean losing him forever.

It's almost a joke – the common association between authors and cats. I haven't done a systematic survey, but I would estimate that at least 75% of the authors I hosts as blog guests mention feline companions in their bios. I'm no exception. I currently have two cats who traveled with us from the United States to southeast Asia ten years ago, and who have settled in quite comfortably.

Many explanations have been offered for the feline-author affinity. A cat doesn't need to be walked, so we can spend our time at our desks as opposed to trucking around on the street scooping up their business. Cats are mysterious creatures with many layers of personality – rather like effective characters. Cats have an elegance and precision of movement we writers might use as a model for our prose. Many authors have cited their felines as sources of inspiration. Noted Canadian writer Robertson Davies once said “Authors like cats because they are such quiet, lovable, wise creatures, and cats like authors for the same reason.”

The other day, I was suddenly struck by a new theory. I was thinking about the fact that so many authors report hearing “voices”. “I just listen to my characters, and write down what they say,” one of my guests commented. Writing sometimes feels like something driven from outside, beyond our conscious control. Well, what if that's true?

Ridiculous, right? But Mr. Toes sits behind my monitor most days I'm writing. He pretends to be asleep, but if I should get up for a bathroom break or a drink of water, he stirs and gives me a look, as it to say, “Where are you going? The story's not done yet!”

I grew up with cats. I grew up writing fiction. When I went off to college and then grad school, I left the felines behind, and although I wrote lots of poetry during that period, I didn't pen a single story. Then I met my husband, a confirmed ailurophile, and filled my life with felines once more. Next thing you know, I was a published author.

Ever tried to write when your cat was sick? Tough to concentrate on the tale, isn't it?

And wouldn't this explain why our characters are larger than life? Why they have so much vitality, such powerful passions, such intense adventures? How could a mere human imagine such creatures? Cats, though – they have superhuman abilities. Just ask them.

Of course to really test this, we'd all have to get rid of our felines and then see if we could still write.

If I'm channeling my cats, I'm okay with that. As long as they don't want their names on the cover.

Meanwhile, I've finally written a story in which a cat has center stage. The Eyes of Bast is a shifter tale with a difference. Read on to learn more.

It was near dawn when I woke again. In the pearl-gray light filtering through the blinds, my familiar furnishings were strange and ghostly, shrouded in shadow. Stretching, I realized I was no longer on the floor. My bed had been unfolded, and I lay stretched out on the sheets, nude. Alone.

Groggy with sleep, I raised myself on my elbows to scan the room. It appeared to be empty. “Tom?” I whispered. There was no answer. A sense of unreality seized me. Had I dreamed the entire scene – the handsome intruder, the overwhelmingly sensual kiss, the orgasm that had shot me straight into the stratosphere? I recalled my devastating arousal in the stranger’s presence. What was going on? Could I be suffering from some kind of hormonal imbalance? This seemed like something more than the normal horniness of a woman who’d been celibate for a while.

Thinking exhausted me. I sank back into my pillow, closing my eyes as if that might make my doubts and confusion vanish. Sleep, I told myself. I’ll figure things out in the morning. I was already drifting back into slumber when the sound of running water roused me.

I peered into the dimness. A tall, male form emerged from the bathroom. My heart did a somersault in my chest.

His low, musical voice melted me. I propped myself up to a sitting position, heedless of my nakedness.
“You! You’re real...You’re still here?”

He’d discarded his clothing as well. In the half-light, I drank in the sight of his smooth, muscled limbs, becoming more intoxicated by the moment. He seated himself beside me and circled me with his arms. Heat radiated from his dark skin.

“Why would I leave, my beautiful one?” he murmured in my ear. Bending a bit, he flicked his tongue across one of my nipples. Lightning tore through me. “There are still a few hours left to the night.”
Before I could reply, he’d fastened his luscious mouth on mine. His firm lips coaxed rather than demanded a response, one I was only too willing to give. I opened to the prodding of his rough tongue, letting him taste me, savoring his wild, sweet flavor in return.

Once again a sort of delirium swept over me. It seemed we were back in the park, sheltered by trees more than a century old. My nostrils filled with the perfume of dew-soaked grass and damp earth, laced with a hint of animal musk. I felt light as dandelion down, drifting in the night wind. Only his strong grip kept me grounded. The moon rode above the clouds, invisible but palpable, stirring tides in my flesh. Desire ebbed then surged, cresting higher with each cycle.

His hands molded my breasts like moist clay. Blind with need, I groped along his furred chest and taut belly, down to his gloriously erect cock. When I squeezed, he moaned into my mouth and bit the corner of my lip. The iron-tinged flavor of my own blood simply added to the stew of sensation.

I smeared my thumb over the slippery bulb. His answer was a savage twist to an already aching nipple. Moisture gushed from my pussy. I tumbled backward, dragging him down on top of me.

“Shaina...” he murmured, breaking the kiss to lick his way along my throat. His saliva felt like liquid fire. He nuzzled in the hollow of my cleavage, then captured one breast and began to suckle. Electric pleasure arced through me when his hardness brushed my inner thigh. I squirmed beneath him, trying to align his cock with my hungry cleft.

“Please....” There was no need for me to say more. The stranger rose above me, supporting himself on his powerful arms. His eyes gleamed like phosphorescent jewels in the grayness. He smiled down at me, baring those sharp, white teeth that had already drawn my blood. An almost inhuman glee painted his features.

He hovered at my entrance, his rigid flesh teasing my engorged clit. I spread my thighs wide. Without a word, he sank his cock deep into my drenched pussy.

When I was a little girl, my dad would make up stories for my siblings and me, fabulous sagas about ghosts and monsters, magical races with mysterious powers, heroes on impossible quests, hidden treasures awaiting only the most courageous seeker. I blame him for my lifelong fascination with the magical and miraculous.

Now that I'm grown up, I create my own tales of wonder, weaving in generous portions of human desire with its potent enchantments. In my paranormal tales, love works the most powerful magick.

Find out more about me and my books at my website, Lisabet's Fantasy Factory (http://www.lisabetsarai.com) and my blog Beyond Romance (http://lisabetsarai.blogspot.com). I also hang out on Goodreads (http://www.goodreads.com/author/show/83387.Lisabet_Sarai) and Amazon (https://www.amazon.com/author/lisabetsarai).  I also have a VIP readers email list where I share release and contest information and run exclusive monthly giveaways. To join, just email me: lisabet [at] lisabetsarai [dot] com.

Posted by Erzabet Bishop at 4:49 PM