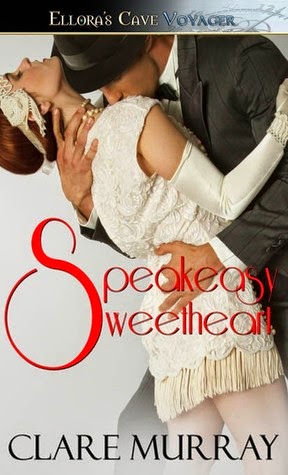 Her boyfriend dumped her, she's being evicted and she has no job prospects-Sasha Kelly doesn't have much to look forward to. Until she stumbles through a mysterious door at her college graduation after-party and lands in a New York City speakeasy in the Roaring Twenties. Before she even figures out what's going on, she's in the lap of Blaze O'Rourke as they escape both a police raid and the dangerous criminal who is Blaze's archenemy. Blaze can't resist the beautiful woman in his lap, but he's determined to find out why she was singing in Vincent Cornell's club. If that means kidnapping and seducing her, so be it. Cornell killed his brother and Blaze has been seeking revenge for two years. But Sasha's presence re-awakes Blaze's hunger for someone to love and he's truly enjoying life-and sex-for the first time in years. Then Cornell kidnaps Sasha, forcing Blaze to choose between revenge and love. A Romantica(r) time-travel erotic romance from Ellora's Cave.


Speakeasy Sweetheart by Clare Murray was an unexpected pleasure. A new to me author, Clare weaved a great world in which you could get lost. The characters were connectible and the story keep you on your toes. Although a romance this story offers many other perks. There's angst, adventure and a hint of thriller within the pages.

Speakeasy Sweetheart is a story about Sasha who travels back in time to the 1940's and becomes the hostage of Blaze. Blaze is working to bring down the criminal Vincent Cornell and believes that Sasha can help him. Through out the story you find out about Blaze and you get to watch the budding relationship take place. The main question is will Sasha go back to her own time, or more importantly will she even want too?

I enjoyed this book more then I first thought. I don't like historical's but thought that the time hop wasn't too long ago that I wouldn't know much about the period hence ruining my enjoyment of the book. The story caught me from the start and I found that I hated it ending as I wanted to stay there for awhile longer. I'm looking forward to checking out more by this author.

The story had a little of everything, romance, humor, angst, making it appeal to many different readers. It's the kind of book that you'll want to read in one sitting and enjoying the escape that it offers.