Will Finn and Jared recapture what they lost in time for Christmas?

Finnegan Gables moved away six years ago, leaving behind his friends, the city he grew up in, and his lover, Jared McNaughtly. They weren’t ready for a commitment then, but now Finn’s back and hoping to rekindle their Dom and sub relationship…if he can find Jared, that is.

Jared’s not had an easy time of it since Finn left. His one attempt at staying in the lifestyle resulted in a stalker, forcing him to change all his contact information and move to a new apartment. He’s disillusioned enough to have left the lifestyle altogether.

A chance crossing of their paths bring them together the week before Christmas. Can they move past their separation and everything that’s happened in the last six years to find a Merry Christmas together?

Finn headed up Bank Street, bypassing the leather club in his search for someplace to have supper. He wasn’t sure he was going to go into the club later. He’d been back in town about six weeks, and while he’d played a little, he just wasn’t feeling it. He knew what the problem was. When he’d been transferred, he’d been hoping to find Jared McNaughtly, his ex and former submissive.

They’d split up nearly six years ago when Finn had moved to Toronto with his job. Neither of them had really been in a place for Jared to come with him, but Finn had to admit, every man he met wound up stacking up unfavorably with the memory of his ex. There was simply something about Jared that was right, that fit, that worked for him like no one else ever had, before or since.

He’d looked Jared up the second day he was back, but the number he had was no longer in service. A search of the online phonebook had turned up exactly nothing. Not that it wasn’t easy to pay to have your information kept off the online phone book, but he’d been hoping hard he’d find it there.

He pushed his fingers deeper into his pockets, cursing himself for believing the meteorologist. No snow and well above zero Celsius had somehow become a growing snowfall that was trying to work itself into a blizzard with frigid winds and below freezing temps.

He glanced at After Stonewall, the LGBTQ bookstore, a staple long before he’d even come out. He remembered they had the neatest window displays, and he was curious to see what they’d done for Christmas this year.

One window was a huge tree, done up in rainbows and sparkles. The light twinkled so fast, it made him dazed. That was awesome. He stood in front of it for a while, enjoying the feeling of being vaguely high on the lights before moving to the window on the other side of the door.

This one had a Christmas angel in it, a beautiful man with high cheekbones and a shock of ebony hair. He was dressed in creamy gauze, with maroon ribbons on his wrists and throat and ankles. He was stunning, and Finn admired him for a long moment.

The angel reminded him of his Jared, and Finn smiled. Then his eyes widened, and his mouth dropped open. The angel didn’t just look like Jared, it was Jared.

“Good lord.” He was surprised enough to say the words out loud.

When they’d parted ways, Jared was making his living as a model, as a living mannequin. Looked like that perfect hard body was still in demand and looking better than ever, at that.

Finn licked his lips, wondering if Jared had noticed him. He wanted to wave. Hell, he wanted to go in and find out when that fine ass clocked off so he could take it to dinner. That sounded like a plan, so he headed inside, hoping to get a chance to talk, to touch. From the other side, he could see the perfect ass, the corseted waist. God.

“You are as stunning as the day I first laid eyes on you, J.”

“I’m going to find out when you come out of the window this evening. And I’m going to be here, take you out to supper. Boy.”

The warm blush that suffused his former and hopefully soon-to-be-again lover suited him to the core. It looked like Jared still had feelings for him. Or at least was still attracted. Finn could work with that.

“If you weren’t working, I’d smack that sweet ass of yours—give you a proper hello.”

Jared needed a pink ass, deserved it. And it would peek so enticingly from beneath all that gauze he wore in the window.

Finn smiled as he approached the cash area. He got a quick grin and a nod from the clerk behind the register.

“Hi. I’m meeting Jared for supper. Could you remind me what time he comes out of the window this evening, please?” Finn asked.

“He’s almost done. He can only stand for about an hour at a time. That pose is vicious.”

His gaze returned to Jared. Vicious, maybe, but stunning for sure. And the Jared he knew had been on the way to being a powerful sub. It didn’t surprise him at all to hear that Jared was holding demanding positions for an hour or so.

All he could hope was that he still had a shot to reconnect. If Jared was already taken, it would be a damn shame. Oh, not for Jared, Finn would be happy for the man, but they’d been on their way to having something special. He’d never found that with anyone else. 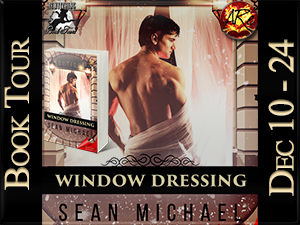 Sean Michael knows how to tell a scintillating tale of lust and seduction and I enjoyed every minute of this book. A picture really is worth a thousand words-but oh what images this author crafts with his.
Hot holiday read!
5/5

Sean Michael, often referred to as "Space Cowboy" and "Gangsta of Love" while still striving for the moniker of "Maurice," spends his days surfing, smutting, organizing his immense gourd collection and fantasizing about one day retiring on a small secluded island peopled entirely by horseshoe crabs. While collecting vast amounts of vintage gay pulp novels and mood rings, Sean whiles away the hours between dropping the f-bomb and pursuing the Kama Sutra by channeling the long lost spirit of John Wayne and singing along with the soundtrack to "Chicago."
A long-time writer of complicated haiku, currently Sean is attempting to learn the advanced arts of plate spinning and soap carving sex toys.

Barring any of that? He'll stick with writing his stories, thanks, and rubbing pretty bodies together to see if they spark.

For more information on other books by Sean, visit his official website: www.SeanMichaelWrites.com


a Rafflecopter giveaway
Posted by Erzabet Bishop at 2:00 AM

Email ThisBlogThis!Share to TwitterShare to FacebookShare to Pinterest
Labels: All Romance E-Books, Bound to Be Naughty, Sean Michael, Window Dressing