Kinks in the Road Home by Roz Lee #BoundtobeNaughty 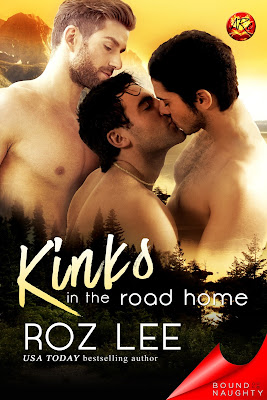 Though there be kinks, the road still leads to home.

Three years ago, Paul found Cameron beaten and clinging to life in a NYC alley. Determined to protect the man he loves, they move to a remote mountain retreat. Though Cam’s physical wounds have mostly healed, the past still has an emotional hold on them, preventing Paul the Dom and his slave from finding the third person they dream of to complete their family.

When Cam meets Matt, thoughts of a third person in his relationship with Paul resurface. His master isn’t pleased with Cam’s attraction to the other man, but the fact they’re talking about a third again is a sign they’re both ready to put the past behind them. The only thing left to do is see if Matt is the one.

Rejected by his family, Matt works at Bound to put himself through culinary school and make a life for himself. Intrigued by Cam and the life he leads as a sexual slave, Matt agrees to become their cook and housekeeper, while deep down he wants more.

Is there room in Paul’s heart for another slave?
Excerpt:
Holy fuck! Matt fought to keep the truck’s speed under control as he drove away from Cam’s workshop, but there was no controlling his heart rate. What the fuck had Roger thought, sending him there?
From the moment he’d laid eyes on Cam, he’d wanted him. Then fuck, he’d learned about the man’s lifestyle, seen the garden where he submitted to his Master, and lust had turned to envy. He’d give anything to be in Cam’s shoes. He hoped to God the man called him to model sometime. Despite coveting his lifestyle, Matt really did feel a connection with the artist, and if he wasn’t mistaken, Cam had been attracted to him, too.
But he was a slave to another. Not that Matt wanted to be anyone’s Master. He didn’t have it in him to be dominant. Perhaps if he did he would have stood up to his dad all those years ago and told him what he thought of a man who would disown his own flesh and blood because of their sexual orientation. He hadn’t known he was submissive then, but looking back he saw the signs. When his father had held the door open and ordered him out, he hadn’t argued, hadn’t stood up for himself. He’d left with nothing but the clothes on his back. Thanks to Roger, Matt had done well for himself, but the sound of a door slamming still took him back to that day, reminding him of the terrified young man he’d been. After days of sleeping on the streets, turning tricks for enough money to eat, he’d met a guy who, after paying him for a fuck in the backseat of his Mercedes, had pointed Matt in the direction of a club where he said he might find work.
He found much more than work. He’d found salvation and acceptance his own family had denied him from a stranger named Roger. The club owner had wanted nothing from him except an honest day’s work. In return, he’d given Matt his life back. After several months of cleaning the club during the daylight hours, he’d allowed Matt to observe the workings of the club at night. He’d gradually worked his way up to a Monitor position which paid well enough for him to enroll in culinary school during the day.
Roger still joked about how little sleep Matt existed on during that time. Between classes, his job at Bound, and studying, he’d been lucky to get a nap in, much less a full night’s sleep.
Those days were behind him. He had a decent job and a fair amount of free time to help Roger out. If he lived to be one hundred, he’d never be able to repay the man for what he’d done for him, but that didn’t make him any less angry for having had his dream life dangled in front of his face like a carrot on a stick. There, but so far out of his reach, he’d never have it.
Fuck you, Roger.
Matt backed the truck up to the loading dock behind ReBound. It was time to have a talk with his friend and mentor.

USA Today Best-Selling author Roz Lee is the author of twenty erotic romances. The first, The Lust Boat, was born of an idea acquired while on a Caribbean cruise with her family and soon blossomed into a five book series published by Red Sage. Following her love of baseball, she turned her attention to sexy athletes in tight pants, writing the critically acclaimed Mustangs Baseball series.
Roz has been married to her best friend, and high school sweetheart, for over three decades. Roz and her husband have two grown daughters (and a new son-in-law) they couldn’t be more proud of.

Even though Roz has lived on both coasts, her heart lies in between, in Texas. A Texan by birth, she can trace her family back to the Republic of Texas. With roots that deep, she says, “You can’t ever really leave.”

When Roz isn’t writing, she’s reading, or traipsing around the country on one adventure or another. No trip is too small, no tourist trap too cheesy, and no road unworthy of travel.

For more information on other books by Roz, visit her website: www.rozlee.net.