The Gangster's Woman by Ginger Ring 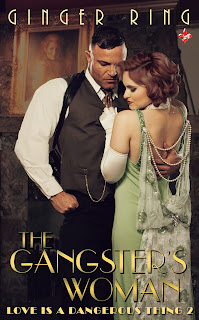 The Gangster's Woman
By
Ginger Ring

Blurb
Now that prohibition was over, FBI agent Michael Flynn hoped to enjoy the quiet life and a chance to finally concentrate on finding his best friend’s sister. He’d been in love with her since he first laid eyes on her picture. Unfortunately, the more he searched the more he realized she wasn’t just missing. Eryn was hiding from one of the most notorious gangsters around. One who wouldn’t rest until he knew she was dead.
Eryn O’Malley had been moving around for years, doing whatever legal, or illegal job she could find to survive. No time for romance or a normal life. A one night stand with a handsome man at the county fair seemed like just the ticket to escape for a moment from her troubled life. However, finding out he was a G-man wasn’t part of the plan. Now he was on her trail. Whether to arrest or rescue her, she wasn’t sure, and she couldn’t wait around to find out. If he caught her, would he forgive her checkered past or would he always think of her as the gangster’s woman?
Buy Links: http://amzn.to/1bEJsrm

Excerpt
“You rest up, handsome, and I will make you a drink. You’re going to need it.” She opened the whiskey bottle and poured a hefty portion in each glass.
“The rest, or the drink?” he inquired.
“Both.” With her back to him, she sprinkled the drug in his drink. He would be sleeping like a baby in no time.
“What’s your name again, doll?” The man rose on his elbows.
“What do you want it to be?” She smiled and handed him the drink.
“You remind me of Rochelle Hudson. Well, if she had red hair, that is.” He downed the whiskey and handed the glass back.
“Another one, George?” Hopefully, the one would be enough, but he was a big fella.
“No. Aren’t you going to join me, Rochelle?” He chuckled and his beefy fingers patted the bed.
“I need a cig first.” Using the motel matches, she lit the cigarette between her red lips, and inhaled. The nicotine calmed her nerves and she breathed deep.
George swung his feet around and sat on the edge of the bed. “I don’t care what the doctors say.” He pointed a stubby finger at her. “Those bad things will kill ya.”
“I’ve done a lot of bad things.” A perfect smoke ring floated from her dark lips. “None of them have killed me yet.”

1. How did you start writing erotic romance? My first book Getting Down to Business was an erotic romance but I am moving into historical and suspense.
2. Plotter or pantster? both
3. What are three things you have on your writing desk?  My laptop, usually a cat, and something to drink.
4. Favorite food? potatoes
5. Tell us a little about your new release. What character in the book really spoke to you? It’s a story that takes place back in the 1930’s. It was the great depression and people did what they could to survive. Eryn is a single mother and she will do anything to take care of her little girl even if she has to break the law.
6. I write because ____... I enjoy creating stories that I always wanted to read
7. What is your favorite type of character to write about?  Complex
8. What is the sexiest scene you ever wrote?  Probably the garage scene in Getting down to Business.
9. What advice would you give new authors in the erotica/romance field?  There are so many books out there right now so don’t expect to make any money. Lol Do it because you enjoy it.
10. What is next on your writerly horizon?  I am in a collection of organized crime stories called Men of Mayhem. 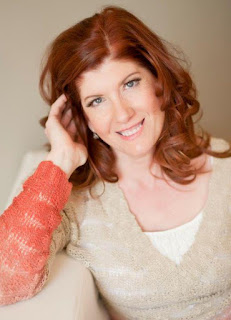 Author Bio
Ginger Ring is an eclectic, hat-loving Midwestern girl with a weakness for cheese, dark chocolate, and the Green Bay Packers. She loves reading, playing with her cats, watching great movies, and has a quirky sense of humor. Publishing a book has been a lifelong dream of hers and she is excited to share her romantic stories with you. Her heroines are classy, sassy and in search of love and adventure. When Ginger isn't tracking down old gangster haunts or stopping at historical landmarks, you can find her on the backwaters of the Mississippi River fishing with her husband.