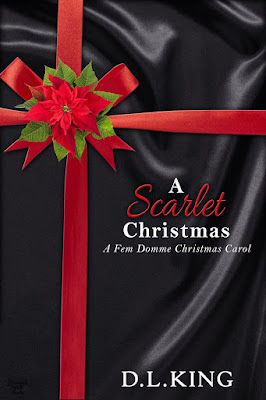 Ebenezer Scarlet, reclusive miser, has nothing but contempt for Christmas and his fellow human beings. He cares for no one and no one cares for him except, perhaps, his niece, Elise. Never having married, he rattles around alone, friendless, in his big, Riverside Drive mansion.

One night, after firing his long-time housekeeper because she dared to ask for a raise, he goes to bed, only to be awakened by his old, dead friend, Sherman Tindall, who tells him he will be visited by three spirits and he’d better do what they say or things could get unpleasant.

Ebenezer is awakened later by a bizarre waif; a Twiggy look-alike from the sixties. She binds him, using and humiliating him. Her orgasms force him to remember his past and how he became the miserable person he is today. The second spirit picks up where the first left off. An elegant Frenchwoman, dressed in red latex, she brings him many gifts, some for external wear and others—not. She takes him on a journey to witness the lives of people close to him, demanding his attention when he waivers or disappoints her.

The spirits are not gentle with him and he is worn out by the time the third spirit visits him. She is faceless, frightening and unknowable, dressed in black rubber. She punishes him mercilessly and directs her leather minions to use him roughly, all the while forcing upon him visions of what will be.

He awakens Christmas Eve morning, a new man. Still bound and sporting the bruises gifted to him by the spirits. Can the future be changed? Can he become the man he was meant to be?

This familiar holiday tale gets an added punch with D.L. King's provocative version. Ebenezer is a miserly old coot who makes everyone's life around him difficult. He fires his cleaning woman, alienates his relatives and generally is a horrid human being. When the ghosts of Christmas pay him a visit, he will get a lesson in manners he's long been looking for. Each spirit is special and shows him the error of his ways--but this time using Dommes! In this no holds barred version, our Ebenezer learns the value of want, hunger and things yet to come in a whole new way and gains a particular new fondness for a certain pair of special undergarments.

I loved this story for its cruel to be kind message and I really love a woman who knows how to steer with a candy cane. You'll have to read to find out just what I mean.

Fans of Fem Domme literature everywhere need to check out this wonderful tale. It may just inspire you to do a bit of holiday magic yourself.

5/5
Where did you get the idea to rewrite A Christmas Carol?

I started writing this story years ago, at the urgings of a friend. The idea was to write something together, but that never actually happened. I started it, but only got a few paragraphs in. I never throw anything away and sometimes, when I look at the bits and pieces I wrote in the past, I get ideas for new stories. I ran across my Christmas Carol a few months ago and started having dreams about all the fun things that could happen. That's not a figure of speech; I actually started dreaming about scenes I could add to the story and, yes, I tended to wake up pretty turned on. And then I got turned on to the business of writing it.

In fact, I got so turned on to writing the story, I couldn't stop until it was finished. I went to Mexico over Thanksgiving week and took my laptop with me. Yep, I wrote the last 5 or 6 thousand words in my hotel room in Mexico--that's how invested I became in this story! My friends were out at the swim-up bar, in the pool, and I was sitting at a table, writing.

We know Charles Dickens today as one of the great masters of English language fiction, but in his day, he was one of us: a writer whose fiction was read for pure entertainment. Most of his books were originally published as serials in the newspaper and people would wait for the next installment to come out. I think Dickens’ works easily lend themselves to modernization because of the universal plight of his characters and the Everyman quality of his plots. The human race remains fundamentally the same throughout history. We may have different gadgets, different fashions and lifestyles now, but the way we feel and think remains pretty constant.

Are your characters reflective of people you know?

My characters are seldom based on real people or, I should say, they aren’t based on one real person. The Alistair Sim’s Ebenezer Scrooge, from the 1951 movie version inspired my Ebenezer, initially. But the City of New York ended up being the true inspiration. I talk about New York being a central character in most of my stories, as important as any character walking on two legs, and it’s often true. This Ebenezer came out of the entire Holiday experience in the city, with a bit of Alistair Sim thrown in. When Dickens wrote A Christmas Carol, he put the whole of his world into the tale. He wrote about people he knew, people he saw every day and events that unfolded around him. None of the characters in A Scarlet Christmas is based on any actual person, instead, each character is made up of pieces of everyone around me, including myself (and, for what it’s worth, that’s the way all my characters are formed).

Anything else like this you’re working on?  What’s next?