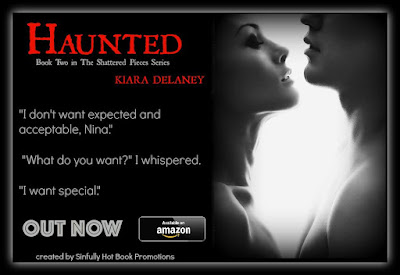 
Haunted: A Romantic Suspense
Movie Trailer: https://youtu.be/vLYnY572_bA
Synopsis:
When Devon Bradford entered Nina Petrov's life, she was broken and alone. He did everything in his power to tear down her defenses, refusing to let her push him away. In the end, it just wasn't enough. Nina had backed him into a corner, and he ended up doing the very thing he promised Nina he would never do- leave her, just as all the other men had done to her before. By the time Nina's secrets had finally come to light, Devon had already vanished- she left him with no other choice. In the end, she was forced to make the decision between letting the memory of him consume her, or vanquishing him from her mind forever.


Devon had abandoned Nina in her darkest hour, in what seemed like a lifetime ago. It had shredded her heart, and left her questioning her sanity. The day he'd left her, she'd buried a part of herself, but the memories of him continued to haunt her, leaving her feeling unsure about everything she thought she once knew.


It has been eighteen months since Devon Bradford disappeared from Nina's life, but she's worked hard to dispel the demons that once plagued her. One day at a time, she becomes one step closer to leaving her past behind and moving forward. That is, until one fateful day, Devon is hurled back into Nina's life, and her reality will be forever changed.


As Nina finds herself chained once more to the ghosts of her past, she realizes Devon holds the key to her future. Can Nina really trust Devon this time, or will he leave her to pick up the shattered pieces of her life once more?


Find out in the shocking conclusion of The Shattered Pieces Series!


Excerpt:
Stepping into her space, I lifted her chin, forcing her to peer up at me. She tried to look away, but I didn't let her. I gazed intently into her eyes as she held my stare. I was dangerously close to crossing a line, but in that moment, nothing mattered to me but Nina. She was becoming embedded under my skin. I was becoming lost in her- lost in her beauty, her touch, and especially her mind. With every second that ticked by, I was free falling into her essence. I wanted to plunge into the depths of her thoughts and emotions to understand just a fraction of what made her into the woman that stood before me.


Author Bio:
Kiara Delaney is a passionate writer of fictional romance, suspense thrillers, and poetry. With a unique style of infusing plot twists peppered with a dash of 'Who done it?', and authentic dialogue, her books have a way of sucking you in and giving you a solid connection with the characters. She began writing poetry at a young age and evolved her love for writing into her current works after many years of encouragement from family and friends. She is also an avid reader, has a great sense of humor, and cannot function without coffee. She is a true writer at heart, and thus, will remain so until she forgets how words work. 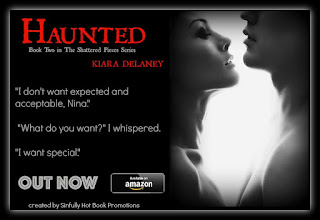 Posted by Erzabet Bishop at 7:30 AM