Mated With the Cyborg

Kai Andros’s orders were simple. Get in. Gather the intel on the terrorist organization. Get out.

Then he met her. Mariska. Beautiful. Innocent. Ignorant of her father’s atrocities. And marked for death.

His orders said nothing about saving her. But he did. He went off-mission.

Can a rogue cyborg outrun both Cyber Operations and the terrorists to save the woman he loves? 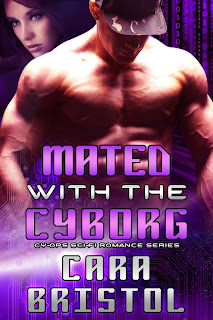 Some might have cheered Mariska’s impending demise. The organization’s brutality had incited a backlash of negative sentiment against all its members. Many espoused the notion that the only good Lamis-Odg was a dead Lamis-Odg.

Kai couldn’t buy into that. Mariska had been no party to the actions of her father or Lamani. She was vulnerable. Innocent. But not stupid or cowardly. In the month spent observing her, her quiet fortitude and inner strength had impressed him. Even before he’d caught the shocking glimpse of her face, he’d been struck by her beautiful eyes. A rich shade of melted caramel, fringed by dark lashes. Expressive in their attempt not to be. She didn’t trust him.

Her wariness pierced him in a way it shouldn’t. She was a person of interest and her emotions shouldn’t impact his decision-making. And in fact, she was wise to be suspicious. Obido had bugged her quarters and employed spybots to keep tabs on her. While Kai wouldn’t intentionally harm her, he would manipulate her to obtain whatever information he could on Lamis-Odg.

The reign of terror had to be stopped.  Direct intervention in Mariska fate jeopardized that goal. Doing nothing was the right thing to do. Sacrifices had to be made for the greater good.

Why did he feel like he was no better than Obido?

When they rounded the corner to the gangway entrance two guards—Lamis-Odg, not androids—snapped to attention, weapons drawn. “Halt!” one of them cried.

While one guard leveled his weapon, the other scanned him. “The android is not authorized to board,” the guard said.

“He’s not boarding; he’s loading my luggage. He’ll disembark after he carries it to my stateroom.”

“Negative. He shall remain here.” The guard motioned. “Leave the cases.”

Kai set the bags down, and the sentry scanned them. “Clear,” he announced. He jerked his head at Mariska. “You may take them now.”

She dragged one toward the craft.

“My duty is to serve the daughter of Obido. Allow me to set the bags inside the door. I shall not enter,” Kai said.

The two guards glanced at each other and shrugged. “All right.”

Under armed watch, he deposited both bags inside the portal.  There was nothing else he could do.  He sought Mariska’s gaze. Don’t go. “Have a safe flight.”

She boarded. Kai stomped down the gangway.


a Rafflecopter giveaway
Posted by Erzabet Bishop at 12:00 AM