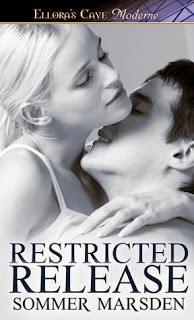 Clara is the recovering anorexic who’s nearly become a shut-in after the end of her emotionally abusive marriage. Matt is the new boy next door. Graphic artist, nice guy, funny…accepting of Clara. She wants him, he wants her—but Clara is afraid.Nadia is the stand-in—Matt’s idea, Clara’s challenge to accept. A longtime friend of Matt’s, she’s a sexual surrogate intended to guide Clara until she’s not afraid of Matt’s desire for her or hers for him. Twosomes become threesomes, watching becomes touching and lust becomes love.When Matt moved in next door, lust was the last thing Clara expected. Two lovers never crossed her mind. And the need to make a choice was something she thought she’d never encounter. But she’s bolder now, healing, and everything has changed. And a choice must be made, no matter how hard.Inside scoop: Clara’s healing includes a hot woman who wants to show her how desirable she is, as well as f/m/f menagés.

Clara is watching the movers that are moving in her new neighbor. Her new neighbor Matt notices that she is watching goes up to talk to her. She flat out tells Matt that she wants to have sex with him after they both say how long they have been celibate. She finds an envelope that Matt drew a nude picture of her on. Clara is in a tough state she divorced her ex-husband because he was mentally and emotionally abusive to her.  She doesn't want to like anyone, but her attraction to him is an itch she needs to scratch. Matt and Clara have sex the same night they meet in Matt's house and he comes up with a plan that he hopes will help Clara with her self image. It involves Nadia, Matt's friend. Nadia shows up at Clara's house and they have sex with a strap on.

Clara really connected with me because she is afraid to let anybody in after her failed marriage. Matt stood out to me because he wants to help Clara see that she is a beautiful person no matter what her ex-husband says. Nadia stood out to me because she is there to help Clara get her life back under control and she also strikes me as someone who doesn't care what people think. The dialog in this book was very gripping very hard to put down. The sex scenes were very steamy.

If you like M/F, F/M/F, F/F, and sex toys this book is for you. Does Nadia help Clara? Do Matt and Clara end up together? You'll have to read this one to find out...
Posted by Erzabet Bishop at 11:07 PM