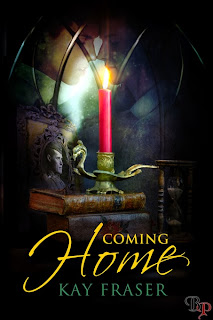 Christopher Whyte never had any desire to hold a respected position in the Langholm household.  After all, during his youth, he had once been caught trying to pickpocket the former Earl, yet somehow, circumstances have lead to him becoming the valet of the new Earl. However, with the arrival of Alexander Harrington, the new Earl of Langholm, Kit is reminded of the bittersweet memories and unwanted emotions that he thought he had buried long ago.  Then, an unexpected offer gives him a new perspective on his situation, and he must make a choice: a life of security and stability away from his new master, or one of unrequited love with him?

Alexander knows he shouldn't have come back. After fighting in the Crimean War, he is no longer the man he once was and as the Christmas Season nears, he is only further reminded of how foreign his home now feels. But it is his new valet, a man he vaguely remembers from childhood, who begins to rouse something within him —something sweetly tempting, yet undeniably forbidden, and when the possibility of losing Kit becomes all too real, he is forced to confront and beat his past demons.

Can a Christmas miracle restore his long lost faith before Kit is lost to him for all time?

"This isn't you. This isn't..."
"Isn't what?"
Kit stopped, mouth agape. No sound came out. He couldn't say it. He couldn’t say it here...could he?
"Isn't what, Kit?" the earl growled.
"This isn't my Lord Alex!" The moment those words left his tongue, his whole world seemed to tilt on its axis. His heart thudded loudly in his ears, and his whole body suddenly became overly heated.
Lord Alex watched him with hooded eyes, his expression unreadable. "Your Lord Alex?" he repeated quietly, slowly. "Since when was I ever your Lord Alex?"
Knowing that his brief lapse in judgment had inevitably altered their tenuous relationship, Kit let go of the other man's arm and took a step back. He lowered his head and stared down at the fine Aubusson rug, the very picture of deference. Regret, like an overwhelming tidal wave, washed over him. "I-I'm sorry, my lord. I misspoke."
Kit felt the weight of the other man's eyes on him. His skin tingled and his stomach clenched at the scrutiny. He heard a dull clunk, and assumed Lord Alex had finally put down his glass.
"No, no, I don't think you did," the earl said. The tone was casual, but Kit recognized a rawness in it he had never heard.
He looked back up, and before he knew what was happening, Lord Alex had closed the distance between them and seized his lips. He stiffened at the unexpected contact. His first reaction was to pull away, to stop this madness before the both of them became lost to it. But something, some pure, unadulterated need, overtook him, and for once, his body and its desires dictated his actions rather than his head.
Buy Link
http://www.breathlesspress.com/index.php?main_page=product_free_shipping_info&cPath=10&products_id=511&zenid=a0d6bf063849c5a1a3463b72c1cb2adb

2. Plotter or pantster?
A: Definitely a plotter.  In fact, I usually have a quasi-screeplay written out before I start writing the actual story.
3. What are three things you have on your writing desk?
A: Computer (obviously), a wide selection of pens and pencils in a holder, and a stuffed Eeyore staring at me.  There are, of course, more items littered around but I'll refrain from mentioning those since that would only highlight what a slob I am.

4. Favorite food?
A: Potato.  I'm not prejudice.  I accept potato in all shapes and sizes, no matter how they are prepared, and no matter what they are paired with.

5. Tell us a little about your new release. What character in the book really spoke to you?
A: My new release is called 'Coming Home' and is essentially a sweet little M/M Victorian Christmas story.  I have to say that Kit was definitely more fun to write, just because I got into his head a bit more.
6. I write because ____...
A: It helps in dealing with the voices in my head.
7. What is your favorite type of character to write about?
A: This may sound cliché but I enjoy writing strong characters with certain vulnerabilities.  And when I say 'strong', it's not necessarily in the physical sense.  I love writing characters with inner strength, but there's always some vulnerability in them, whether they're aware of it or not.  It's the perfect way to find that partner who can complement them.
8. What is the sexiest scene you ever wrote?
A: Off the top of my head, I think it was a shower scene I wrote a long, long time ago.  I have to say I haven't delved into that in quite a while.
9. What advice would you give new authors in the erotica/romance field?
A: I would say, 'Remember to create characters you like and have fun with them.'  There have been various times when I've started with characters and plots, and then abandoned them partway through because I just couldn't get myself to like the character(s) any more.
10. What is next on your writerly horizon?
A: In the writing arena, I've got a couple of stories on the go (one with a supernatural-historical angle, and one just plain historical), which I hope to finish soon.

Author bio:
Not knowing what she wanted to be when she grew up, Kay Fraser graduated from university with an eclectic selection of bachelor’s degrees (Biology, Education, and Computing Science).  When she isn’t busy working full-time as a systems analyst in the corporate sector, she can be found: pretending to be an amateur foodie by trying new restaurants, appeasing her competitive nature by competing in marathons and triathlons, managing her aggression issues by training for her third degree black belt in taekwondo, and of course, indulging her soft ooey-gooey center by writing stories with a healthy dose of romance. She currently has two M/M romantic short stories (A Fairy’s Tale, and The Other Side of Midnight) published under the pseudonym G.O. Noce.