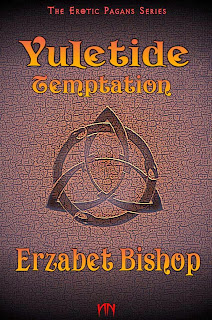 Jasmin is rocking the Yuletide season as she oversees the party for Morrigan's Promise with Brigit and Julia.  Shane, her old school girl crush is back in town. When she goes to talk with him about decorations for the event, his large dog greets her instead, letting loose some holiday mischief.
When Jasmin realizes that Shane doesn't remember her at all, she refuses his help and leaves. A little intervention from her friends and some Yuletide magic help the lovers connect, only to fall apart again with a heated misunderstanding.
Will Shane accept Jasmin being a witch? Can Jasmin learn to conquer her fear of dogs? Will they both give into the passion that will bind them as lovers?


A little mistletoe and a bag of dog biscuits might just seal the deal, helping them give in to Yuletide Temptation. 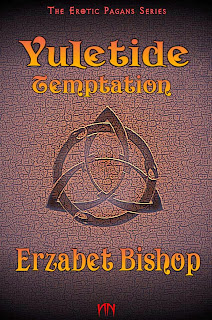 
“What do you mean he’s gone?” Julia sat the plates on the table and stared after the front door.
“What happened?” Brigit frowned.
“I’m a witch.” Jasmin stood up and numbly began to remove the table linens from what normally was their work table.
“Oh, a shock indeed.” Brigit smirked.
“Well it was to him apparently.” Tears threatened, and Jasmin blinked them away, flushing miserably.
“But his mother was part of the original coven. Didn’t he know that?” Brigit patted Jasmin’s back thoughtfully. “I wonder if she didn’t tell him.”
“Well, maybe he just doesn’t understand.” Julia interjected. “When Brigit first told me, I didn’t know what to expect. It didn’t take much to feel right at home. I saw how you live and now here I am, for keeps. A lot of people misunderstand.”
Jasmin nodded gloomily. “I bet he thinks we kill chickens in the living room.”
“Do you care what he thinks, Jas?” Brigit pressed her lips into a firm line. “If you don’t then now is the time to walk away. If he matters, then you know what you have to do.”
“What?” Jasmin blinked.
“You have to fight fire with fire, girl. I’ve seen you staring after him through the shop window when you didn’t think I was looking.” Brigit winked and elbowed Julia, nudging her toward the kitchen.
“Oh! Absolutely. Hold on a minute.” Julia grinned and scurried off.
Jasmin arched a delicately shaped eyebrow. “What are you up to?”
“Here!” Julia ran back into the dining area sans work space and presented Jasmin with a cellophane gift bag full of dog treats tied with a swirl of red and green ribbons.
“What do I do with this?” The bag crinkled as Jasmin took it.
“You corner the lion in his den and decide once and for all if you want to collar him.” Brigit smiled, her lips turned up in a devious twist. “Then you lay one on him he’ll never forget.”
“But he already walked away once. Am I supposed to be humiliated again?” Jasmin crossed her arms under her breasts and huffed.


“You? No way. I don’t know if you know, Jas, but that man has been staring after you every chance he gets since he got into town. Despite what he said, he has it bad.” 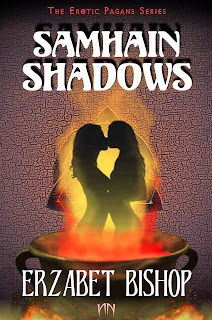 Listen to a full reading of Samhain Shadows! 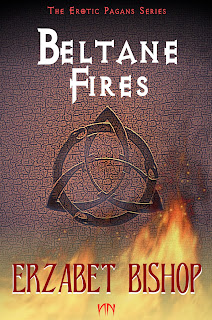 Posted by Erzabet Bishop at 9:02 AM