If the author of the Anglo-Saxon heroic tale Beowulf did erotica what might it have sounded like?  That’s the challenge author Slave Nano has set himself in his newly released novella ‘The Pagan Sorceress’.

Sam is about to carry out a strange experiment.  She is an archaeology student specialising in reconstructive archaeology and her idea is to recreate an Anglo-Saxon pagan burial ceremony.  It’s Samhain eve and the night of a full moon so it’s the perfect time to carry out such a ritual.  She enlists the help of her friend, Dan, and together they go off to the site of a burial mound where wonderful swords and sceptres were excavated many years ago.

A travelling story teller is at the court of a Saxon king.  He recites the tale of two soul-entwined lovers from an earlier, more chaotic, period when king’s warred amongst each other.  He tells the tragic tale of Cyneburh, Pagan sorceress and daughter of the mighty Pagan king Penda and Alhfrith, son of Athelwald the king of Deira, her hero-warrior lover and betrothed.  The two kings have formed a mighty political and religious alliance but, more than that, the young woman and man have forged a passionate union of their own.  But this new alliance has enemies and before their wedding night is over there will be a tragic outcome.  As King Penda stands at the edge of their burial chamber he invokes a curse of vengeance against the murderous act perpetrated against him.  But, how many years will it take before he is finally avenged?

As Sam stands on top of the burial mound dressed as an Anglo-Saxon pagan priestess with Dan at her side, is she aware of what ancient powers she will invoke as their lives become entwined with those of Cyneburh and Alhfrith from many centuries ago?  Will the pagan king’s oath of vengeance be fulfilled?  Will the souls of the two lovers be finally released? 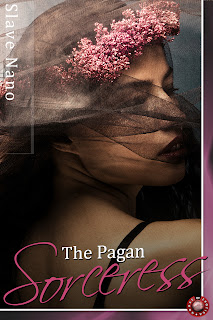 Peace reigned and long summer the two lovers spent in joy filled company and passionate love-making.  To a place of private retreat they would retire, far from mighty hall and mud-daubed village dwelling. To hidden glade and luminous still pool they resorted.   Enchantments Cyneburh summoned to cast a veil around the secret hiding place.  Guarded by mighty oak and watchful wolf, no creature, man or beast, disturbed their secret world of passion and desire.

There, passionate kiss they exchanged.  Serpent-like their tongues wrestled and inter-twined in their mouths each warring with the other in a battle of desire in which each was the equal of the other.  With feather like tender touch they sought out each other’s bodies.  Cyneburh explored her warrior’s sturdy frame battle marked with ruddy scar. Each glowing blemish she touched affectionately with healing hand and lover’s kiss.  For Cyneburh craved for no battle shy prince or innocent virgin but strong armed battle proven hero to share her feminine secrets with and fulfill her ardent need.  Broad chested and powerful she embraced his muscular frame in soft skinned arms and planted kisses on each scar of her hero’s chiseled torso.

‘The Pagan Sorceress’ and pagan ritual

My latest release, a novella called ‘The Pagan Sorceress’ interweaves a historical strand set in the Anglo-Saxon period with soul-entwined lovers Cyneburh, the pagan sorceress of the title, and her warrior-lover Alhfrith within a contemporary story involving archaeology student Sam and her friend Dan. In this part of the story Sam seeks to recreate an Anglo-Saxon pagan burial ceremony.
There are influences of two types of ritual in the story.  The first is the Anglo-Saxon burial rite performed at the burial of Cyneburh (no spoilers here as I make clear from the outset that her story has a tragic end).  We know little about how such a ritual might have been performed in Anglo-Saxon times beyond the evidence provided by the sites themselves and what were buried in them.
As part of the research for the story I went off into the Yorkshire Wolds near where I live to seek out some of these mounds and tumuli as they are a feature of the landscape, first from Neolithic and then Anglo-Saxon times. These burial mounds would have been Pagan ritual sites of enormous importance.  They were typically on the tops of the Wolds where they would have been in full view of the communities living in the landscape.  As my character, Sam, says in the story, when the mounds were first erected they would have been covered in chalk and would have stood out as white mounds on the crest of the hills. The burial chambers themselves were filled with the objects from everyday life needed to take with you to the after-life. These objects were all gathered and documented by Victorian and Edwardian archaeologists when the mounds were first opened.  Of course the burial mound in my story is one for the daughter of a king and a Pagan priestess so the objects I put in it are inspired by Anglo-Saxon swords, sceptres, helmets and jewellery found at larger and grander excavated sites such as Sutton Hoo and the Staffordshire Hoard.
The second type of ritual that influenced the story is the Pagan one that might be conducted at Samhain or Halloween. It is no coincidence that Sam chooses this night to conduct her re-enactment and it’s used by me for more than just wanting a story I can market as a Hallloween story.  Samhain is a significant Pagan spirit night.  It is a magical moment when the veil between the worlds is at its thinnest and a window opens to guide the spirits of ancestors to the otherworld. Pagans will hold it in reverence for that reason and conduct circle rituals to celebrate it.  It’s not a scary or frightening time for a Pagan.  It’s more about celebrating transition and moving on, just as Samhain also marks the end of summer and the beginning of winter, the word itself being Celtic for summer’s end.

So, when Sam invokes her burial ritual at a time when the veil between the worlds is at its thinnest she unleashes powers that she has no control over – powers that allow Cyneburh and Alhfrith to enter her world.

This book is a blend of present and the past, artfully intertwined to give a story long enough to give you a glimpse of both, but skillfully done with enough time for you to eat your lunch or read it in one evening. It is powerful, sensual and a wonderful short work to read, especially this time of year.

If you are looking for a story that stirs the body and gives you a passionate look into the past, then this book is for you. Slave Nano is a master storyteller that illustrates his tale like a finely wrought tapestry. 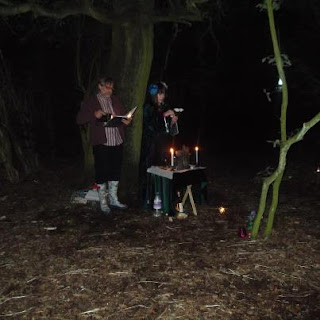 Posted by Erzabet Bishop at 5:00 AM