I Wish I'd Never Met You Book Tour and Giveaway

I Wish I'd Never Met You
Tanith Davenport

Flick Lindenwood, fresh from college, has returned home to the suburban haven of Green Valley, back to society…and the source of her heartbreak. Four years ago Elodie Hamilton savagely broke her heart, and Flick has no intention of letting her pretty ex get back under her skin. As far as she’s concerned, she and Elodie never happened.

But Elodie has other ideas.

Afraid to come out, Elodie chose to destroy her relationship with Flick rather than let her family know who she was. But now she wants to right the wrong she did—if she can only find the nerve, and if she can convince Flick to see past the pain she caused. 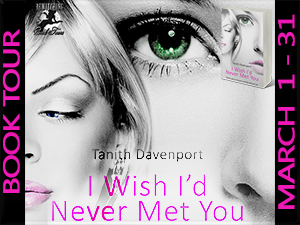 Excerpt:
The door of the Dodge Charger slammed behind her as Flick Lindenwood walked up the driveway to the house, dragging her wheeled suitcase after her.
It was exactly as she remembered. Pansies and tulips bloomed in the borders of the front garden, edging an elegantly mown lawn. In front of her stood the house, two stories rising behind a large veranda, a curtain twitching in one of the windows.
Before she reached the front door, it opened to reveal her mother. Flick let the handle of the case go and stepped forward to meet her in a hug.
“Felicity, darling! We’ve been waiting all morning.”
“Sorry, Mom. Traffic.”
Her mother stepped back, smiling, and looked her up and down. Flick bore the scrutiny patiently. She had a new haircut and outfit which had yet to receive maternal approval.
Apparently they did. Her mother pulled her back in for another hug. “You look lovely, darling. Oh, it’s so good to see you. I’ve got so many things to tell you—I’ve been organizing your graduation party, and then there’s the Saulters’ barbecue tomorrow, and—”
“All right, all right!” Flick broke in, laughing. “Let me get in first!”
She followed her mother into the entrance hall, noticing that the lounge door was open on her left. Through the doorway she could see her graduation photograph taking pride of place on the marble mantelpiece, blocking off part of the gold-edged mirror.
“Don’t be long,” Mrs. Lindenwood added airily as Flick made her way toward the staircase. “I want to hear everything. Have you met any nice girls?”

This was a great short read. The story was well rounded, the interaction between the characters smacking of joy and heartbreak as their relationship went from down to up again. The sex scenes were smoking hot and I couldn't put it down.

I do wish we had seen Elodie's POV as all of the story was from Flick's. And the way the two girls broke up-wow. Flick had a good reason to be mad but the resolution at the end was a little too easy. I also wondered about Elodie being so afraid to come out if her sister was also a lesbian with the full support of her mother. Without Elodie's POV, it was hard to get a good read on her and the story was a little incomplete. In other words-more please! Great story-just wanted multiple POV like you get in many romance novels, so it pulls you deeper into what each character is feeling.

Tanith Davenport began writing erotica at the age of 27 by way of the Romantic Novelists' Association New Writers' Scheme. Her debut novel "The Hand He Dealt" was released by Total-e-Bound in June 2011 and was shortlisted for the Joan Hessayon Award for 2012.

Tanith has had short stories published by Naughty Nights Press and House of Erotica. She loves to travel and dreams of one day taking a driving tour of the United States, preferably in a classic 1950s pink Cadillac Eldorado.

Tanith's idea of heaven is an Indian head massage with a Mojito at her side.

1 ebook copy I Wish I'd Never Met You

a Rafflecopter giveaway
Posted by Erzabet Bishop at 12:00 AM