Hello! Thank you so much for having me today!

I’m super thrilled to share with you my latest release, Wet (Elemental 1)! Wet is the first in a five-book paranormal romance series. My Elemental series is a re-release after some noteworthy revisions and scene additions – so even if you read the previous version of Elemental 1, this one will have some new surprises for you! Without further ado, I present...Wet.

Blake Hawke, first born of the four Hawke brothers, has the ability to control water.

Keeping the family secret is a big deal. A deal Blake all but throws out the window when he finds Brooke sitting alone on the beach. Before he knows it he’s showing her everything he can do – until he gets the call that his baby sister is trapped between an impossible fire and a cliff.

Brooke has barely come to terms with the fact that she’s got the hots for a real-life Aquaman when news breaks that they have serious enemies. Now she’s got a guy to win, a secret to keep, and weather-controlling enemies to look out for. The last thing she needs is to add some creepy stalker to the list.

Can Blake protect his family and the woman he’s falling in love with from an enemy he never knew he had? 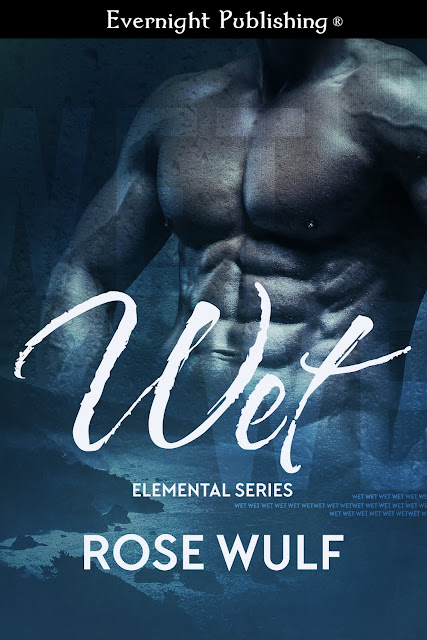 Tiny balls of hail bounced off the hood of Blake’s car as he swung in behind Brooke’s Civic. He disregarded the quickly dissipating storm as he yanked his keys from the ignition and rushed from his car to her door. All he’d been able to think about on the drive over had been her voice as she’d told him—in broken, disorganized pieces—what had happened. She’d started crying in the middle of her first sentence, but around her tear-soaked voice he could hear the tightness caused by obvious pain.
His concern left no room for the manners his mother tried to teach him, and so he didn’t even pause to tap on the door before he let himself in. But he did pause when his eyes landed on her a moment later.
Brooke was sitting on her counter, beside her sink. She had a kitchen towel wrapped around her left forearm, held in place by her other hand. Her cell phone was plugged into the wall on her other side, in easy reach. And between the phone and herself was a large smear of blood. Several spots of blood dotted the otherwise white kitchen linoleum, leading back to the living-room carpet.
“Brooke.” Blake gathered himself and moved quickly towards her, sparing only a glance at the devastation in her living room.
She lifted her head and blinked her eyes several times before attempting to offer him a smile. “You drove too fast,” she said, her voice devoid of any appropriate scolding tone.
“No, I didn’t,” Blake argued, failing at his attempt at levity as much as she had. He was standing before her in no time, and with his new angle he could easily see a piece of bloody glass lying in the sink beside her. That piece of glass was undoubtedly the reason the towel on her arm was slowly darkening.
Her tone curious and forcibly light, Brooke asked, “Are you sure I shouldn’t have called 911?”
Frowning at her wrapped arm and the fresh droplets of blood on the floor beneath her dangling feet, Blake replied, “Absolutely. You get free medical. I’ll call Logan and have him come over to board up your window and get rid of that branch, okay?”
“You don’t have to do all that,” Brooke said, her right hand tightening over her injured arm. “I have insurance … and my landlord will take care of my window as soon as he gets home.”
Blake lifted his frown to aim it at her properly. “I’m not taking no for an answer this time. Now let’s get you in the car and we can talk on the road.”
Brooke hesitated, her gaze darting toward the ground. “I’d really rather not walk, if it’s all the same to you.”
Blake silently reached out and pulled her phone from the charger before dropping it into his pocket. Then he shifted and reached around her, ignoring her half-hearted protests, and wrapped an arm around her torso. He slipped his other arm carefully beneath her knees and slid her off the counter, against his chest.
“What are you doing?” Brooke asked, a tiny bit of life beginning to return to her voice.
“Keeping you off your feet,” Blake replied easily as he carried her toward the front door. It was shut, indicating that he’d remembered to close it, but he didn’t hesitate. As he walked, his eyes flicked back toward the living room, and the melted hail pulled from the carpet and off the debris. It gathered together and then smoothly slid through the air toward them.
The water expanded as it neared them, and Brooke watched in silence as the water poured into the space between her door and the doorframe. Blake slowed his pace just slightly as the water gathered together and popped the latch. Then it curved, pushing out, and the door slowly swung open.
“That was impressive,” Brooke declared. Life had returned to her voice, but so had the pain.

About Rose:
Rose Wulf is a giant romance fangirl. Hot, protective, sometimes even downright barbaric heroes and spitfire heroines are her favorites. Rose has been writing for as long as she can remember, and over the years she’s only grown fonder of it. The bonds between characters have always captivated her, and as an author those are Rose’s favorite things to play with – not always to the relief of her fictional babies!
Behind the scenes Rose is a quiet personality. She enjoys spending her non-writing time with her four year-old German Shepherd, Shadow, her mom, and her friends. Be it a fun game of Cards Against Humanity or a relaxing movie night, Rose believes everything is better with company. As for her own romance, she’s still searching for her hero (and hoping that, when she does find him, he’ll be willing to cook!).