New college graduate, Ethan Moore, flies to San Francisco for a job interview with an advertising firm. The interview goes so well that he decides to blow off some steam at a gay club. He meets a gorgeous man at the bar who seduces him, but then leaves his hotel room in the morning with only a note. A few weeks later, Ethan begins his new job and discovers that the man he slept with is his new boss, Chance Harlow. He's fallen for the playboy, but wants to keep their relationship strictly professional until he can prove himself to the company. He's failing miserably as Chance tries seducing Ethan every chance he gets, and Ethan keeps succumbing to his advances.

Ethan is selected to accompany Chance to Bali for a huge account will be spending ten days at a luxurious resort with the man he's fallen in love with. Chance has made his intentions known, and has told Ethan that he's here to have fun on this trip, and he won't pressure him, but if Ethan doesn't want him, there are plenty of men who will. Ethan struggles with this until one evening, they are in the hot tub with two hot swingers who want to play. Ethan flees to his room to get drunk after watching Chance make out with one of the men. Chance storms in the room a little while later, angry because his thoughts of Ethan are keeping him from having fun with other men. Ethan realizes his mistake and finally confesses his love for Chance and they make love. They spend the rest of the trip making up for lost time. When they get home from their successful business trip, Ethan realizes that no one cares if he and Chance are an item after all. 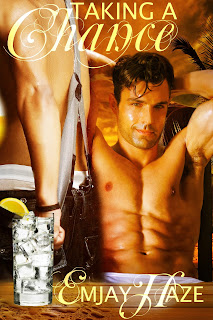 Emjay Haze is the pen name for a wife, mother and avid fan-fiction writer in the gay romance genre. She resides in Northern Virginia with her husband, two teenagers, a dog, cat, hamster, gecko, and several fish. She always loved writing, and decided to pursue a Bachelor’s Degree in Creative Writing from Southern New Hampshire University where she graduated with high honors in April, 2015.  Her interests include music and pop culture and she is an advocate for the LGBT community.  Her stories delve into all types of romantic relationships, with a focus on first times and new encounters in a light-hearted style to show that everyone deserves love no matter whom they are or who they love.  Her goal is to gain a diverse readership and broaden the minds of those who might not normally pick up a ‘gay’ romance because it’s more about the person than the sexuality.

a Rafflecopter giveaway
Posted by Erzabet Bishop at 1:30 AM