This collection of revamped fairytales is certain to entice and excite your senses. From Cinderella to Red Riding Hood, Twisted Fables takes you on a journey through the many fairytale worlds with a sensual twist.

These twelve stories are penned by both seasoned scribes and new authors; the anthology provides readers with the perfect opportunity to explore offerings from their favorite storytellers as well as find a new favorite or two. 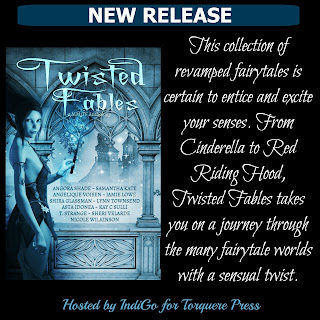 Excerpt
From The Dragon’s Gift by Angora Shade -- A single clawed digit pushes into my mouth, spreading my lips apart and caressing over the flat of my tongue. I create an O shape around it and curl the edges of my tongue around her finger. The tip of my tongue slides smoothly over her pointed tip as she withdraws, and I enjoy the light smacking sound our actions make from my suction once she’s left my mouth. My mind wanders as I imagine gliding in and out of multiple places… Extra long fingers reaching extra, extra deep… If this is really happening, I tell myself I cannot let her down.

I reach with both my hands to grasp the hand still floating in front of my face. I kiss each knuckle in turn, and then lick the space between her thumb and pointer finger with the tip of my tongue. The texture of the costume is rough in the opposite direction of the layered fabric, and smooth as glass down the other way. I taste something I imagine to be the remnants of stage makeup she might’ve helped a fellow actor draw on, but it’s the warmth radiating from underneath that lures me further; I want to feel it all over my body. Grasping her hand tightly, I place it over my face, guide it down over my features to my neck, and push into the dip of my shirt collar. I feel the trail linger like a mild burn long after her hand cascades onto my shirt fabric and pauses above my rapidly beating heart.

My eyes closed sometime during the action, but I open them to confess what I’ve always wanted to say: “I want you.”

Maxine doesn’t speak a word, but her head tilts from side to side again. I wish she’d say something—anything—to assure me of her intentions. A few touches, some light kisses—they mean less to me without the emotional connection inflicted by words. I’d like to hear her tell me she’s always secretly desired me, been curious. A confession of mutual love would send me over the moon…. 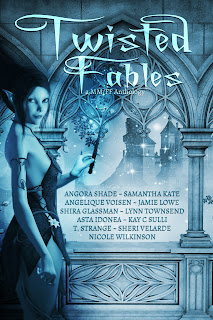 Nicole Wilkinson has been an active writer for the better part of ten years. Raised by parents who embraced the arts no matter the style, she has always been fascinated by imaginary worlds and the characters who inhabit them.
Born on the West Coast but raised on the East Coast, she often comments that the two distant shores might as well be foreign worlds for all the similarities between them. She currently lives in North Carolina, but has also spent time in Oregon, Washington State, South Carolina, and Virginia. She has become a pro-mover by now and has learned to love a life in constant transit.
She loves to write. Or as she is prone to say, "I write for the same reason I breathe - Because if I didn't, I would die," which is a famous quote attributed to the great Isaac Asimov.
Facebook: http://www.facebook.com/nicole.wilkinson.9465
Facebook Author Page: http://www.facebook.com/nicolewilkinsonwrites
Tumblr: http://www.nicolewilkinsonwrites.tumblr.com
Livejournal: http://n_wilkinson.livejournal.com
Website: www.nicolewilkinsonwrites.com
Goodreads link: https://www.goodreads.com/author/show/4083721.Nicole_Wilkinson

~~~
Samantha Kate works as a paralibrarian (that’s library support staff) for her day job. In her free time, she tries to pursue more creative projects than is humanly possible. “Bottom of the River” is her first published work; her first novel, Cinnamon and Cigarettes, will be released by Torquere Press in 2016.

~~~
After enduring several evil stepmothers, T. Strange was finally swept off her feet by a dashing Prince(ss) Charming. Or, in actuality, attempted to sweep the larger Prince(ss) of her feet. They lived happily ever after in the charming, far-away land of Canada with their animal friends. One cat helps with the chores.
Facebook: https://www.facebook.com/tq.strange
Facebook Author Page: https://www.facebook.com/AuthorTStrange
Twitter: https://twitter.com/TqStrange
Pinterest: http://www.pinterest.com/tqstrange/
Tumblr: http://tqstrange.tumblr.com/
Blog: http://tqstrange.blogspot.ca/
Torquere: http://www.torquerebooks.com/index.php?main_page=index&manufacturers_id=464
Goodreads link: https://www.goodreads.com/author/show/3334999.T_Strange

~~~
Asta Idonea is the MM pen name of Nicki J. Markus. She was born in England in 1982, but now lives in Adelaide, South Australia with her husband. She has loved both reading and writing from a young age and is also a keen linguist, having studied several foreign languages.
Nicki works as a freelance editor and proofreader, and in her spare time she enjoys: music, theatre, cinema, photography, sketching, and cross stitch. She also loves history, folklore and mythology, pen-palling, and travel.
Blog: http://www.nickijmarkus.com
Facebook Author Page: http://www.facebook.com/NickiJMarkus
Twitter: https://twitter.com/NickiJMarkus
LinkedIn: https://www.linkedin.com/in/nicolamarkus
Goodreads: http://www.goodreads.com/author/show/4567057.Nicki_J_Markus

~~~
Jamie Lowe is a mixed contemporary and fantasy author who has released a novel as well as a number of short stories through Torquere Books and Dreamspinner Press in the past.  After completing a Creative Writing MFA, Jamie is back to writing on a part time basis when not working, traveling, or studying in her passion areas of Greek and Roman history.
Twitter: https://twitter.com/authorjamielowe
Tumblr: https://www.tumblr.com/blog/fictionofjamielowe

~~~
Sheri Velarde lives in New Mexico with her husband and their two dogs.
Being an avid reader since an early age, she has wanted to be a writer for as long as she can remember. She has been writing all her life, but only recently started to actually try to pursue her dream of writing for a living. She specializes in all things paranormal and that go bump in the night. Her heart truly lies in exploring unknown worlds or adding the supernatural to our world. If it goes bump in the night or has magical connotations, Sheri writes about it.
She is constantly putting out new material with various publishers, so it is best to keep up with her on her website www.sherivelarde.weebly.com.

~~~
Angora Shade is a multi-published American author living in what she lovingly refers to as "Sheep Shit Nowhere" Europe. In an attempt to add some spice to her small town life, Ms Shade began writing explicit erotica as a form of entertainment. Exploring the boundaries of acceptable sexual literature, she often seeks to create stories that not only entertain others, but also expose and push against the negative stigma surrounding sex in modern day society. She believes that sex, in literature, art, personal thought, and physical nature, should be celebrated and expressed freely and as easily as any God given freedom. Her favorite themes in writing include revenge, self-discovery, alternative materials for love play/bdsm, as well as anything that produces a good tingle, sizzle, or laugh. When not writing, Ms Shade enjoys red wine, travel, dancing, classic cartoons, baking, and creating fine art.
Goodreads: https://www.goodreads.com/author/show/8105324.Angora_Shade
Facebook Author Page: www.facebook.com/angorashadeauthor
Twitter: https://twitter.com/angorashade
Blog: www.angorashade.blogspot.com

~~~
Kay C. Sulli is a queer asexual writer of historical, supernatural, and contemporary fiction. She can often be found scribbling in the wilds of the American West. Her imagination is filled with cowboys, patriots, nature guides, werecritters and more demanding their stories to be written. When Kay is not writing she can be found reading everything she can get her hands on, hiking, and practicing outdoor photography.
Twitter: http://www.twitter.com/kaycsulli
Website/Blog - http://www.kaycsulli.com
Goodreads link: http://www.goodreads.com/kaycsulli

~~~
Shira Glassman is a bi Jewish violinist from Florida. Not for use in microwave.
Facebook Author Page: http://www.facebook.com/ShiraGlassman
Twitter: http://twitter.com/shiraglassman
Blog: http://shiraglassman.wordpress.com