The Raven's Kill: A Visit with Ella Grey 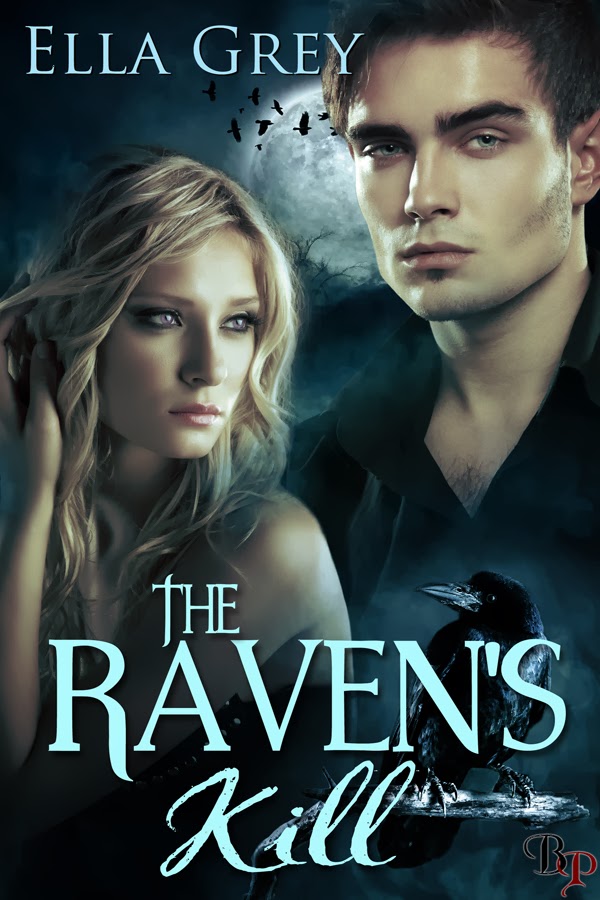 Raven is a shifter with the ability to see the darkness in a person's soul. He has never strayed off his path or let a target live before, until he meets Cassandra for the first time. She's an innocent, so why does someone want her dead?
As soon as she laid eyes on the mysterious man, she wants him with an intensity that scares her. When he appears in her room one night with an impossible story, she doesn't have a choice, believe him or die when someone else takes the job he's refused.


It's a fight against time and an attraction that scares them both, no-one knows what the future holds. Even a fledgling seer.

Her moans had echoed all over the mansion. Raven had even heard them from his place on the roof; he'd shifted long enough to enter from the skylight before taking his human form again and headed to investigate. No lights highlighted the dark corridors but it wasn't a problem. The dog remained silent in the kitchen, a terrible guard. The moans made him rock hard, she was the only one in the house which left one very interesting possibility.
It didn't take long to find her room, the door slightly ajar and he pushed it open a little more.  Cassandra writhed on the bed, one hand between her legs and the other on her chest. He watched her come undone and knew he could do it better. He wanted her to fall apart with his tongue lapping at her juices, sucking and teasing her until she called out his name. He quite liked the fantasy and missed her eyes opening, resting on him. Her scream ripped through the air.
Well, what did you expect? That she'd pull you into her arms and you could finally find out what her lips taste like?
Raven darted from his place in the doorway and pressed his hand across her mouth. "I won't hurt you." The words left him in a rush but she fought against him. "Cassandra, I don't intend to hurt you. Listen to me. Please listen to me." She slowly stopped fighting but her eyes were wide, her breathing fast. "I'm going to remove my hand. Don't scream or I'll be forced have to put my hand over your mouth again."
For the first time in his life, he didn't know what he was doing. The smell of her desire, mixed with the vanilla perfume that seemed embedded into her skin, filled the air and it was distracting as hell. "Trust me?"
It was asking a lot and he knew it but she finally nodded. The impression of her lips against his hand felt like a burn, as if the brief touch left a scar against his skin.
"Please don't hurt me."
Her words made him angry but not at her, he didn't want her to be scared of him. "I already said I won't."
Cassandra moved away from him, turning to face him. She nibbled at her bottom lip, her fingers twisted together. "What do you want?"

Ella Grey always knew that she'd become a writer. Well, it was either that or a brain surgeon but her heart wasn't in it. She's constantly had voices in her head, which could have ended up being strapped in a strait jacket and being locked in a padded cell. Thankfully she picked up a pen and put it to paper.
She currently lives in the UK with her son, partner and cat. She rarely sleeps and can often be found with a cup of coffee close to one hand, with her other hand on the keyboard.
Follow her
http://www.ellagrey.wordpress.com
https://www.facebook.com/EllaGrey83
https://www.facebook.com/writerellagrey