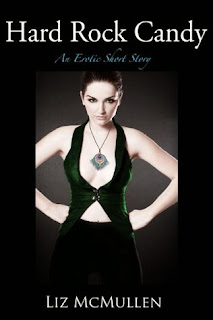 **Hard Rock Candy is a short erotic story**
Lea Hunt’s Pride parties are legendary, from the scantily clad cocktail servers to the succulent finger foods. She is craving something more exotic than her standard fare, but Jade Emerson makes it clear she is off the menu. Lea is disappointed, but determined. When a public display of Jade’s strategically placed piercing gives her the opening she is hoping for, she goes in for the kill. The debauchery that followed could make the most seasoned exhibitionist blush.
***WARNING*** This story is intended for a mature audience. It depicts graphic sex between two women.

I love a short story that goes straight to the plot and gives me the scorching heat I'm looking for in less time than it takes me wind down for an afternoon nap. That's what I got with this little jewel of a tale as we meet Lea. She's bored with the standard party fare and wants something more gritty in her choice of companion for the night. Jade is not her usual type, and she lets her know quickly that an interlude with her is not even in the remote land of possibility. When Jade shows some party goers her piercing, Lea is beside herself with lust and in a very public performance, shows her guest just how much she appreciates her show and tell.

This book will curl your toes and leave you gasping for breath. Every naughty thing you can think of rests between the pages and is artfully done. Make sure you have a good large glass of ice water handy after you've read this one! Hot doesn't even cover it. This is raw sexuality between two women who hunger for something more than fluffy lovemaking. Sheer physical need morphs into a blistering heat that will suck you in and leave you panting on the other side.

Check out her show with some sexy reading below. Just make sure you know it isn't safe for work!