Snowed Under by Celeste Rupert 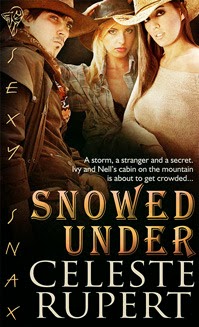 A storm, a stranger and a secret—Ivy and Nell’s cabin on the mountain is about to get crowded.Ivy and Nell have been able to get along very well without a man, thank you very much. They take care of all the chores, the cooking, and each other—in every way.But when a sexy stranger blows in with the storm, Nell is curious. Is sex with a man really as bad as Ivy told her it was?Ivy was just as glad that her husband was considerate enough to disappear, leaving her and Nell to their happy lives, but the stranger brings news that may change everything. Betrayed and angry, Ivy decides that revenge is on the menu, and Dean Rook is just the man to help her out.

Ivy and Nell have a cabin nestled deep in the mountains. During a snow storm they had problems getting into the cabin. When they finally got into the cabin Nell starts to undress Ivy. Things are heating up between them. They play a game that what places on the body need to be warmed.

The ladies are interrupted by Dean Rook. Nell and Ivy met after her husband ran off one and a half years ago. Nell wants to know what the fuss is about with the opposite sex. Ivy doesn't want to have anything to do with it.  Dean offers to watch them until they are ready for him. Ivy decides that if Nell wants to have an opportunity with the opposite sex she was going to give it to her. She tells Dean to start taking off his clothes. While Dean does that he decides to tell them that he was driven up the mountain by none other than Ivy's husband Chuck. Things really up between the threesome and a hot ménage ensues.

I liked Ivy because she has been through a lot and she is a strong person.  Nell was interesting because she doesn't have any experience with men. Dean was a character that stuck with me because he doesn't pressure anybody and lets the ladies go at their own pace. The story line was very detailed and the sex scenes were super-hot. There’s a whole lot more to a cabin in the woods than meets the eye in this story.