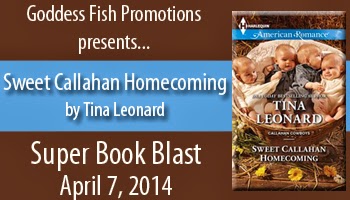 Will Ashlyn Callahan finally find her magic?  The last Callahan rides in the exciting conclusion to the bestselling series, The Callahan Cowobys!

Ashlyn Callahan has always known that her fate can only bring danger to those she loves. That's why she flees Rancho Diablo—and the ornery cowboy she loves—to hide out in Texas Hill Country. But all hell breaks loose when Xavier Phillips finds her…and her four newborn babies.

Xav finally tracks down his warrior woman—only to discover she's the mother of two perfect little boys and two perfect little girls. And he's the father! Now Ash has to marry him. With the future of Ash's entire clan at stake, Xav is ready to lay his life on the line to safeguard the family legacy. Not to mention create a homecoming—and a wedding!—worthy of his Chacon Callahan bride! 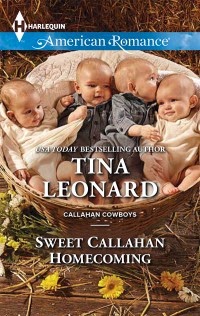 Two squad cars pulled in front of the house, and the next thing he knew, a couple of Wild’s finest were yelling at him to put the little lady down.

“I forgot to call and tell the sheriff it was a false alarm,” Ash said, apologetic, as he set her gently on the ground. She was breathless and a bit tousled from being upside down. “You’d better go.”

“I’m not going anywhere until you agree to go with me.” He could be just as stubborn as she. “Go tell the sheriff and his friends that their services aren’t needed.”

“It would be better if you go.”

She gazed up at him, and he caught a funny bit of desperation from her. “Nope,” he said, still wearing stubborn like a badge.

“Ash, is there a problem?” the sheriff asked, and Ash looked at Xav.

“Is there a problem?” she asked Xav, and he realized she was holding him hostage to her demand that he leave.

Well, he’d never been one to go down without a fight.

“Hell, yeah, there’s a problem, Sheriff. This woman won’t accept my marriage proposal. I drove all the way from Rancho Diablo in New Mexico to propose to her. Xav Phillips,” he said, shaking the sheriff’s hand.

The sheriff and his deputies snickered a little at his conundrum. Then the sheriff perked up. “Xav Phillips, Gil Phillips’s son, from Hell’s Colony?”

“I knew your daddy before you were even a twinkle in his eye,” the sheriff said, drawing a groan from Ash. The sheriff turned to her.

“Ashlyn Callahan, you hit the panic button because some man has proposed to you? Again?” The sheriff shook his head. “He drives a nice truck, comes from a great family, practically Texas royalty. If Santa brings you a father for those four children of yours, you might treat him a little nicer than calling the law on him.” He tipped his hat to Ash, shook Xav’s hand again, and he and his deputies got back in their squad cars. “Good luck,” the sheriff said to Xav through his open window. “Probably five men in the county have offered to marry this lady, and she’s turned them all down flat.”

He nodded. “Forewarned, Sheriff. Thanks.”

“Are all of you through enjoying a manly guffaw at my expense?” Ash demanded. “Because if you are, I need to get back in the house. I have children who need me.”

“Good night, Sheriff.” He followed Ash back inside, his mind niggling with discomfort and alarm. Five men had proposed to her? Ash picked up a baby that was sending up a gentle wail and sat down on the old-fashioned sofa situated across from the Christmas tree.

He sat next to her. “Hey, Ash,” he said, “the sheriff said something about you needing a father for your children, that Santa had sent you one for Christmas. It was a figure of speech, right?” He looked at her, surprised but not displeased in the slightest that she was undoing the pearl buttons on her white sweater. She tossed a baby blanket over her shoulder, obscuring the baby’s face—and suddenly, it hit Xav like a thunderclap that Ash was nursing that baby.

Which would not be the slightest bit possible unless these were her children. He stared at Ash, and she looked back at him calmly, her denim-blue eyes unworried and clear.

“You’re a mother,” he said, feeling light-headed, and not from the crack Mallory had landed on his skull. “These are your babies?”

She nodded, and he got dizzy. The woman he loved was a mother, and somehow she’d had four children. This perfect four of a kind was hers.

It wasn’t possible. But he could hear gentle sucking sounds occasionally, and he knew it was as possible as the sun coming up the next day. He felt weak all over, weak-kneed in a way he’d never been, his heart splintering like shattered glass.

A horrible realization sank into him, painful and searing. “Who’s the father?”

She frowned. “A dumb ornery cowboy.”

“That doesn’t sound like you. You wouldn’t fall for a dumb ornery cowboy.” 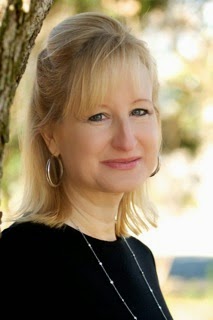 Tina will be awarding $25 Amazon e-certs to TWO randomly drawn commenters during the tour so make sure you follow the tour and leave comments!