Peace, love, and barbecue—with a big order of sexy on the side.

Sous chef Darcy Cunningham is less than entranced with small-town Konigsburg’s obsession with barbecue. But her future career as a chef de cuisine requires expanding her culinary horizons, so she talks the Barbecue King, a.k.a. Harris Temple, into taking her on as his apprentice.

However, learning Harris’s professional secrets wasn’t supposed to include falling for his spicy blend of smoky sexiness and laid-back charm.

Chico Burnside specializes in flying under Konigsburg’s small-town radar, but lately life has been going a little too smoothly, even for him. Hoping to shake things up a bit, he talks Harris into teaming up for Konigsburg’s first barbecue cook-off. But once shy scientist Andy Wells catches his eye, Chico’s got more on his mind than brisket. Like enticing her out of her shell to show her just how tenderly a big guy can love.

As the competition ignites, so does the romance. Until a natural disaster threatens to derail Konigsburg’s dream team before the grills even get good and warmed up.

“So maybe I’ll hire you away from the Rose.” He rubbed his thumb across her palm, slowly, back and forth, a ribbon of heat against her skin.

Her throat tightened. “You can’t afford me,” she whispered.

She glanced at him quickly. He was smiling, but there was something behind it. Hell, what do I do now?

She licked her lips. “’Cue and loving? Sounds like a plan.”

She exhaled a long, shuddering breath. “I don’t… What does that mean?”

“It means I love you, toots. What did you think it meant?” His hand closed more firmly on hers.

She took another deep breath. Suddenly her chest felt way too tight. For a scary moment she thought she might pass out. Terrific. Love means being unconscious.

“Darce?” He sounded concerned. “I didn’t mean to give you a panic attack. Just relax, okay?”

He paused. “Are you saying it now?”

There was another long pause. “It might be nice if you actually said it, you know.”

She took another deep breath, then blew it out. “I love you.”

He narrowed his eyes. “That sounds like you’re in pain.”

“Come here.” He held out his arms to her. After a moment, she pushed herself to her feet, then dropped onto the lounge chair with him, feeling his arms close tight around her shoulders.

It already hurts. But she didn’t say it. Instead, she sank deeper into his arms, closing her eyes tight. If this was a dream, maybe she’d wake up happy.

1. How did you get started writing romance/erotica?
I think it was when I started reading romance. I’d tried writing mysteries, but I was always more interested in the relationship between the h/h than whodunit. When I started reading authors like Linda Howard and Elizabeth Lowell, I thought Okay, that’s it! That’s what I want to write. I think you have to really love the genre you write, and I really do.

2. What was your inspiration for your latest book?
You can’t go anywhere in Texas without running into barbecue—it’s like the official state food. After writing books about wine (Long Time Gone), coffee and bar food (Brand New Me), and a serious gourmet restaurant (Fearless Love), barbecue just seemed like the logical next step.

3. Vacation-so elusive for us writers-where would you go if you could actually take the time off?
I actually do take time off regularly since writing is my full-time job and I can do it anywhere. I love, love, love western Colorado—Crested Butte, Telluride, Durango, Pagosa Springs, etc., etc.—so I’d probably go there. I know it’s not Paris, but it makes me happy.

4. Plotter or pantster?
Plotter, sort of. I like to lay out the direction of the plot before I start writing so I don’t end up in blind corners, but it’s more like a suggestion than a writing diagram! I frequently change things as I write, or as I revise.

5. Name three things on your desk right now.
My MacBook Air, my Samhain mouse pad, and my Logitech mouse. I used to have a fancy Apple mouse that never worked right, but I finally bought an inexpensive Logitech baby, and I absolutely love it.

6. Is there any kind of music you like to listen to while you write?
I need quiet while I write, unfortunately. So no music, no television, nothing but silence. Boring, but it helps me think.

7. Pizza or salad? (or both for balance?)
It depends. I’m trying to lose weight, so I go with salad most of the time, but I have pizza once a month or so, particularly flat bread since I can kid myself into thinking it’s healthier.

8. What movie have you watched lately that has stayed with you?
I’m more into binge-watching television than movies. I love both The Good Wife and Scandal, but for different reasons. TGW has all those realistic relationships that can just break your heart (especially lately). Scandal is the opposite—totally over the top. But they have so much fun you’re willing to let them do it.

9. Favorite book so far in 2014?
Sherry Thomas’s Luckiest Lady In London. I absolutely love her stuff.

10. What are you working on next?
I’ve got a couple of trilogies set in Colorado that I’m trying to finish. I love Texas (and I lived there for over twenty years), but I live in Colorado now and I’d like to do some writing about all the neat things I see around here. 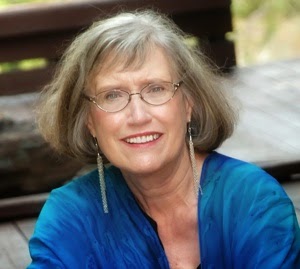 Meg Benjamin is an author of contemporary romance. Her Konigsburg series for Samhain Publishing is set in the Texas Hill Country and her Medium trilogy for Berkley InterMix is set in San Antonio’s King William District. Meg’s books have won numerous awards, including an EPIC Award for Contemporary Romance, a Romantic Times Reviewers’ Choice Award for Indie Press Romance, the Holt Medallion from Virginia Romance Writers and the Beanpot Award from the New England Romance Writers. Meg lives in Colorado with her DH and two rather large Maine coon kitties (well, partly Maine Coon anyway). Her Web site is http://www.MegBenjamin.com and her blog is http://megbenj1.wordpress.com/. You can follow her on Facebook (http://www.facebook.com/meg.benjamin1), Pinterest (http://pinterest.com/megbenjamin/), and Twitter (http://twitter.com/megbenj1). Meg loves to hear from readers—contact her at meg@megbenjamin.com.

Meg will be awarding a $50 Amazon GC to a randomly drawn commenter during this tour and herreviews tour, here.