Under the Satyr Moon 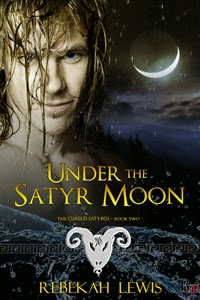 Under the Satyr Moon a curse was wrought, and under the same moon shall it be reversed...
...if the Fates allow.

A freelance photography job goes downhill fast when Lily Anders' boyfriend dumps her and disappears from the campsite, leaving her stranded in the middle of the Blue Ridge Mountains. Feeling lost, heartbroken, and afraid, Lily follows a mysterious melody through the wilderness. She never would have guessed the source of the music would reveal that legendary figures of Greek mythology really existed, and she could be one of them.

Ever since he was cursed, Ariston has only wanted one thing—to be human again. He has searched the globe for a nymph to free him, but over three thousand years of failure has pushed him into a life of solitude. Ariston believes he's finally found the salvation he's longed for when he catches Lily spying on him in the forest. Unfortunately, he has to convince her to like him first.

What seems to be the Fates bringing them together in time for the Satyr Moon proves to be an elaborate scheme with macabre intentions. Dionysus has sent Ariston's estranged brother, Adonis, to ensure the curse cannot be broken, and nothing tosses cold water over the flame of seduction like a twin seeking vengeance. "Oh God. Oh God. I'm hallucinating, probably have a fever, and I need to get out of here now." She nodded as she said the last word as if it finalized her babbling, confirming an inner argument of some sort.
"I don't think you're suffering any ailments. You can keep gawking at me all you like. Although, I would prefer if you looked a little higher than my feet." Much more impressive, that. At least, no one had ever complained before.
She made a derogatory noise in the back of her throat. "Please tell me you're some D&D nerd in a really well-made costume and you mean me no harm. Also, if you have a cell phone, I would really appreciate it if you don't take my previous comment personally and let me borrow it for a moment." Ah, well, that solved one of his concerns; if she had no phone, she couldn't have sent evidence or contacted anyone about what she'd seen. Unless, of course, she had a camera stashed somewhere. I should probably frisk her to find out.
He crossed his arms. "This is not a costume." Ariston narrowed his eyes, a thought occurring to him. "I didn't sense you being attracted by my song like I did the blonde. Are you a magical being? Who are you? A deity? A demigoddess?" He was on to something there, but wasn't sure what. Had she brought the freak thunderstorm the night before? There had been no sign of rain, yet rained it had. And hailed on top of it.
"Right... Maybe you should let me hold that phone I mentioned before. I think it could bring help for both of us."
"I don't have a phone on me. Where would I put it? In my leg hair?" He lifted a hoof and waved it in a counterclockwise motion. Brunette's eyes widened once more. Why did everyone get all worked up over the hooves, but not the horns? Those mostly received a pffft reaction followed by a series of retorts about his nature of "horniness." It's not like he would start making goat noises and chewing on buttons. The only part of his anatomy of any real importance hung heavily between his legs, and that was as human as any mortal man. Except he liked to think he was better endowed.
"In your, uh, gun holster?" Brunette pointed to his panpipes.
"What about it?" Ariston asked.
"You asked where you would put a cellphone. There is a large pocket on your strappy purse thingy." She nibbled her full bottom lip, an act that shot fire to his groin.
"It's not a purse. How could you even say that? It's very manly."
"Uh huh. Of course."
"It is." The twinge of lust faded out as he noticed the blood spotted bandage across the palm of her hand. "How were you injured?" Ariston took an unconscious step toward her. He had medical supplies at the cabin. Though he healed at phenomenal speeds, his blood still made a mess when it flowed on the wrong side of his skin. He could patch her up in no time.
She glanced at her palm, almost surprised to see the bandage there. Then she shook her head and said, "Yeah, this is the weirdest conversation ever. Sorry, but...gotta dash." She darted off in the opposite direction. As she sprinted away, stinging drops of water began to bombard his skin. Brunette had to be the one manipulating the rain, but how? What was she? It must be linked to her emotions somehow, and it made him wonder what had happened to provoke the furious assault from the elements the night before.
Ariston snapped out of his stupor and chased after her. "Hey, not so fast!" A thought started taking root in his mind. He'd been excited about her before, but if he was right... Gods, he couldn't let her escape. Not if there was a chance.
Brunette was magical in nature, affecting the elements. The timing was too good to be true. Ariston had sought one of her kind for as long as he'd been a satyr, and if she turned out being a nymph, she was also his savior. Unfortunately, his salvation continued putting distance between them. She may have the upper hand in the rain, but he knew the forest well. He'd capture her like the legends of old, and she'd be his. Mine!
She had revealed herself to him. Perhaps not intentionally, yet she had. All he needed was Brunette to desire him enough to take him as a lover under the Satyr Moon. He smiled. Ariston was rusty when it came to true seduction, without the use of magic, but he enjoyed a challenge. He could be free, mortal, could finally have a family, grow old, and live a normal human life.

A Visit with Rebekah Lewis:

I got a weird idea in my head, and started writing to see what would happen. Ended up being naughty LOL

A little of both. I plot an outline then the rest is filled in as I go.

Cell phone, Funko Pop figures of Thor and Loki, and a miniature statue of Atlas holding the globe on his shoulders.

5.       Tell us a little about your new release. What character in the book really spoke to you?

Under the Satyr Moon is about a satyr named Ariston who has been trying to find a nymph to break his curse for over three thousand years.  He finally finds her and has to convince her to like him which proves difficult when he keeps making himself look bad because he has no experience in wooing properly. Lily was much easier to write than Ariston. Though Hermes, as always, is the one that is the most vocal in terms of me writing him.

I will go insane from all the voices in my head otherwise. ;)

7.       What is your favorite type of character to write about?

One with no filter. I am an introvert. I am also shy and have social anxiety. So characters that are outgoing and say what they want are a lot of fun because they can do and say things I can't do or say without having an anxiety attack and dying of mortification :P

In  Under the Satyr Moon, Ariston tells Lily he could seduce her into wanting to be with him for the ritual at the end of the book. Things occur that prevents it, but Lily, being curious, eventually asks what he would do. So he shows her, and that scene makes me blush just thinking about.

9.       What advice would you give new authors in the erotica/romance field?

10. What is next on your writerly horizon?

Hermes is getting a novella. Because he won't shut up. LOL I am also dabbling in a dystopian novel and a time travel novella about a pirate in present day. Rebekah Lewis holds a Bachelor of Arts in English Literature. She is an award-winning cover artist for digital publishers, and enjoys every minute of it when not immersed into a world of satyrs and Greek gods. Always feeling the need to be productive, she can be found creating something whether with words or images, or with arts and crafts. She resides in Savannah, GA with her cat, Bagheera.
If you would like to follow Rebekah on social media or contact via email, use the following information:
Website: www.rebekah-lewis.com
Email: lewis.rebekah@rocketmail.com
Facebook: http://www.facebook.com/RebekahLewisAuthor
Goodreads: https://www.goodreads.com/author/show/6537317.Rebekah_Lewis
Twitter: @RebekahLLewis