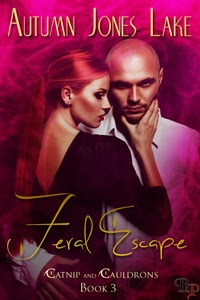 Molly has been captured, imprisoned, and is near-death when rescued. Spending time with Ivan has her re-thinking her vow not to take a mate.

Molly finds the mysterious and aloof Ivan deeply irresistible—she has from the moment she met him. But she's spent the last year dodging her family's plans to mate her to another shifter with no intention of changing her mind. Will being kidnapped and imprisoned in a cell where food and water stopped coming days ago cause her to lose hope?
Ivan volunteers every waking moment to find Molly since she went missing. His reaction to the sweet little cat shifter surprises him. He's fiercely determined to never settle down with another shifter, but he can't escape the draw she has on him.
Rescuing Molly is only the beginning. The danger she and the rest of the runaway cat-shifters have managed to elude is closing in on them fast. Ivan is committed to protecting Molly from any threats, but his past comes back to bite him when his old enforcer friend tells him he's been hired to bring Molly in. Will his love for Molly turn them both into prey?

Buy linkhttp://www.breathlesspress.com/index.php?main_page=product_free_shipping_info&cPath=13&products_id=561
Excerpt One:
Huddled in the corner of her tiny stone cell, Molly Goldfoot stared into the darkness. Were it not for the small crack between the rocks, she would have no idea if it was night or day. She wrapped her arms around her knees, pulling them tight to her chest. A shiver rippled through her body. She'd lost track of how long she'd been held captive. In the beginning, someone had brought food and water each day, but that had stopped.
She closed her eyes and visualized her friends, Martha, Kipp, Deacon, Oscar, and her new friend, Onyx. Were they searching for her? Why couldn't Onyx's wizard boyfriend conjure up some magic to find her? Maybe it wouldn't matter. Wherever they had imprisoned her must be magically spelled. No matter how many times she tried, she could not shift into her cat form.
Ivan. The last person she'd been with before she'd been so rudely grabbed and shoved into the back of a dirty, smelly old van. Would Ivan search for her? He was older than her. Sexy. Dangerous. She wanted him bad. Why had she been so damn stupid and refused his offer to walk her home?
Cause she hadn't wanted the others to know she went to meet him on the sly. For the millionth time, she wanted to kick herself. She and Oscar were friends. Sure, they'd kissed a little, but it wasn't serious. There shouldn't have been a problem with Ivan walking her home.
Molly shook her head, and a sad chuckle trickled past her lips. This was her punishment for her trampy behavior. She altered her position on the hard stone floor, wriggling her left foot which had fallen asleep. At some point she'd lost both her sneakers, so only thin, dirty socks protected her feet. Her butt hurt. This captivity thing became old quick.
Had her family orchestrated this? As she did every day, several times a day, she stood up and shuffled the few steps to the front of her prison.

Autumn Jones Lake Interview Questions for Erzabet’s Enchantments
1. How did you start writing erotic romance?
I read it and enjoy it so it just kind of came about naturally.
2. Plotter or pantster?
Total pantster! But, I have been experimenting with some plotting and having good results. I don't think I could ever completely map everything out beforehand. My characters do what they want, when they want!
3. What are three things you have on your writing desk?
I don't really write at a desk.  But unless I am writing away from home (coffee shop, library, etc.) my pug is always near to me.  Either snuggled up against my side or sitting on my feet.
4. Favorite food?
Chocolate. That counts, right?
5. Tell us a little about your new release. What character in the book really spoke to you?
Well, Feral Escape is a little different than the first two books in the Catnip and Cauldrons series. There are two new main characters. My hero, Ivan really spoke to me. He made a brief appearance in the book before this one (Onyx Shadows) and I just knew he needed his own story. Molly is the perfect person to help him get over some regrets he has from his past, it just takes him awhile to realize it.
6. I write because the voices in my head tell me to.
7. What is your favorite type of character to write about?
I like heroines who are not delicate little flowers, especially ones who don't wait for the man to make the first move.
8. What is the sexiest scene you ever wrote?
Wow, that's like picking my favorite…well not kid, because that's creepy, but something it's impossible to pick a favorite of.  Hmmm…I have a weakness for sexy shower scenes personally.  I don't want to give too many details away but there is a scene in the middle of Feral Escape I loved for many reasons.  It takes place outside in the rain, and because Ivan is the protective type, he has to say no to something he really doesn't want to say no to. There. That's clear as mud isn't it?
9. What advice would you give new authors in the erotica/romance field?
Write what you love. Write something you enjoy reading. Most importantly I'd say always work on improving your craft. A local RWA chapter is a wonderful way to meet other writers and take classes. I love my local RWA chapter, it has been invaluable to me as a writer
10. What is next on your writerly horizon?
Where do I start? I have probably thirty different ideas, drafts, and scenes I could work on at any given time. My main focus is a rock star series I have been working on. It's not a big secret that I'm a crazy little metal head. I go to tons of shows and even do some minor concert photography. I'm very passionate about this project.  The first one was published as a short story two years ago, but I've since revised and expanded it into novella length. The same for the second story. We'll see.
I also have an MC romance I've been working on that is a little different than a lot of the ones that are coming out now. My main characters are wrong for each other in every single way, but I can't wait to see where they go next.
The last big project is a sister in love with her older brother's best friend. So far my hero in that one has gotten a very enthusiastic response from my critique pals.
Please include the following with your interview:
I'm probably most active on facebook. My interest in twitter ebbs and flows. Ditto for pinterest, which you can kind of tell by my boards. One day I'm there for recipes and the next it's a new hairstyle!

"I need you," she said, then took off running toward the lair.
Ivan pulled himself up off the ground and gave chase, hunting her with ease. Her pale skin glowed in the dark making it so easy to track her. Those sleek, little legs of hers carried her fast over the rough terrain, but he caught up before she reached the door. Snagging her around the waist and hauling her against him, both of them breathed hard.
"Gotcha," he grunted.
He fumbled them inside and locked the door without letting her go. She squirmed and struggled in his grasp; her hot, wet little body sliding against his. He led her straight into the bathroom, flipping the overhead light on with his elbow and setting her down on the counter. Taking her face between his hands, he looked into her eyes. Mud and raindrops streaked and soaked her hair, but he'd get her clean in a second.
The desperation in her eyes burned his chest. "Are you okay?"
She uttered a little whimpering noise and looked down. "I need you."
"I know kitten, I'm going to take care of you. Let's get you washed up."

writes scorching contemporary and paranormal romance with a smidge of snark. When not weaving happily ever afters, she enjoys collecting nail polish and playing with her dogs. Born and raised in Upstate New York, she vows to move South every Winter but falls in love with NY all over again every Spring and Fall. Feral Escape is the third story in her Catnip and Cauldrons series. Autumn shares her home with her husband and their three rescue dogs. She is actively involved in her local RWA chapter.