Her Favorite Vice: A Visit with Holden Granger 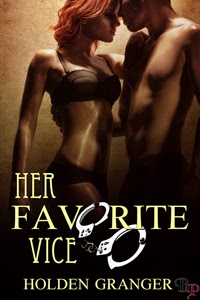 Kelly Thomas has worked hard to make detective and be taken seriously as a cop. Now she’s been given her first major case, and it’s the kind that can make a career.  Going undercover to pose as a high-end escort is going to push her to the limits of what she’ll do to make the case. The fact that her new partner, veteran detective Ryan Mackie tempts her in very unprofessional ways doesn’t make things any easier…

Ryan reached out and pulled her in slowly. Kelly looked down in a flirty display of mock shyness. Ryan gripped her chin and tilted her face upwards toward his. She was momentarily distracted by the how the gentleness of his grip contrasted with the hands that looked so hard and rough. All other thought vanished as he leaned down. Kelly's mind had time register that they were about to kiss when his lips touched hers.
It was for the benefit of the camera. This was her police partner, but the kiss chased the reservations away. His lips were soft but demanding, and his hands drifted to her hips, pulling her against him.  She felt his mouth open and hers followed.  She wondered for a moment what tongues were supposed to do in a fake kiss. He answered the question as he tasted her. This wasn't a fake kiss. His tongue teased her and she melted into him.
He pulled away. She moaned a little in disappointment and was shocked to realize it wasn't all an act.
"I've waited a long time for this. I've got to have you," Ryan said, reaching for the bottom of her dress. Kelly went stiff, but Ryan felt her tension and gave her a wink.
Kelly relaxed and grinned back. This was a show, but they could have fun with it.
"Aren't you impatient," Kelly said with a scolding laugh "Is this how you treat a lady?"  She made sure her back was to the camera as she moved closer to the side of the bed.
"I'm not waiting another minute," Ryan said and reached again for the hem of her dress.
This time she let him have it and obediently raised her arms. Ryan lifted the dress over her head.  He paused, studying her a little too long for her comfort. In a silk lace bra that in stronger light would be nearly transparent and a tiny thong that barely covered her sex, Kelly struggled not to be self-conscious. She'd never expected to have to reveal this much in a sting operation.

2. Plotter or pantster?  Great question! For the most part, the story comes to me first as a plot idea. Once I start, I am very often surprised about the directions and twists that happen along the way.

3. What are three things you have on your writing desk? My writing desk is a mess, cluttered with photos of family and friends, pens, and notebooks. But more interesting to your readers might be the bottle of rum (unopened), my private investigator’s badge (previous job), and a statue of the Buddha I picked up in India.

4. Favorite food? Fried catfish. I acquired that taste while I was living in the south. It’s hard to find fried catfish that is done the right way.

5. Tell us a little about your new release. What character in the book really spoke to you? I love all of my characters, but I really enjoyed writing the heroine in this one.  Detective Kelly Thomas is a great mix of eager young cop, and slightly insecure woman.

6. I write because ____... I have to. Any writer knows the odd compulsion to tell the stories that pop into our heads. If I had lived thousands of years ago, I would have told them around the campfire at night.

7. What is your favorite type of character to write about? I love strong women. There is nothing sexier to me than a woman who overcomes the obstacles placed in her path, both by others, and herself.

10. What is next on your writerly horizon? I am polishing up a novel of paranormal romance. I wanted to see what I could do in that genre and expand my horizons. It’s been a fun challenge!

Holden Granger brings a wide variety of life experiences to his writing.  He has worked as a political campaign manager, private investigator and financial industry entrepreneur.  Holden has also traveled extensively in the United States, Europe and Asia in search of cultural perspectives on love, sex and relationships.  He has published other works with Breathless Press including Amateur Night and The Strength to Submit. Fans can contact him at grangerholden@yahoo.com.
Posted by Erzabet Bishop at 12:30 AM