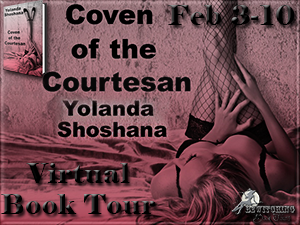 Coven of the Courtesan
The Courtesan Chronicles
Book 1
Yolanda Shoshana

Coven of the Courtesan follows a coven of witches in New York City who bring back the magick and art of the courtesan. Come on the adventures of Bast, Lola, and Pixie as they take you on a journey that looks like Charmed meets Sex in the City.

Bast Buchanan is about to become CEO of Spellbound Entertainment until the Ewing family swoops down and buys the company. She never saw this coming.

Ramennis Ewing expects to run his father’s new conquest and take over the family media empire. He is ready to prove there is more to him than what is in the press.

When Bast is asked to work side by side with roving playboy, Ramennis, can she continue to keep her guard up with this new enemy, one of the sexiest men she has ever met or does her coven have to open up a can of power of three on him. Just who will seduce whom? 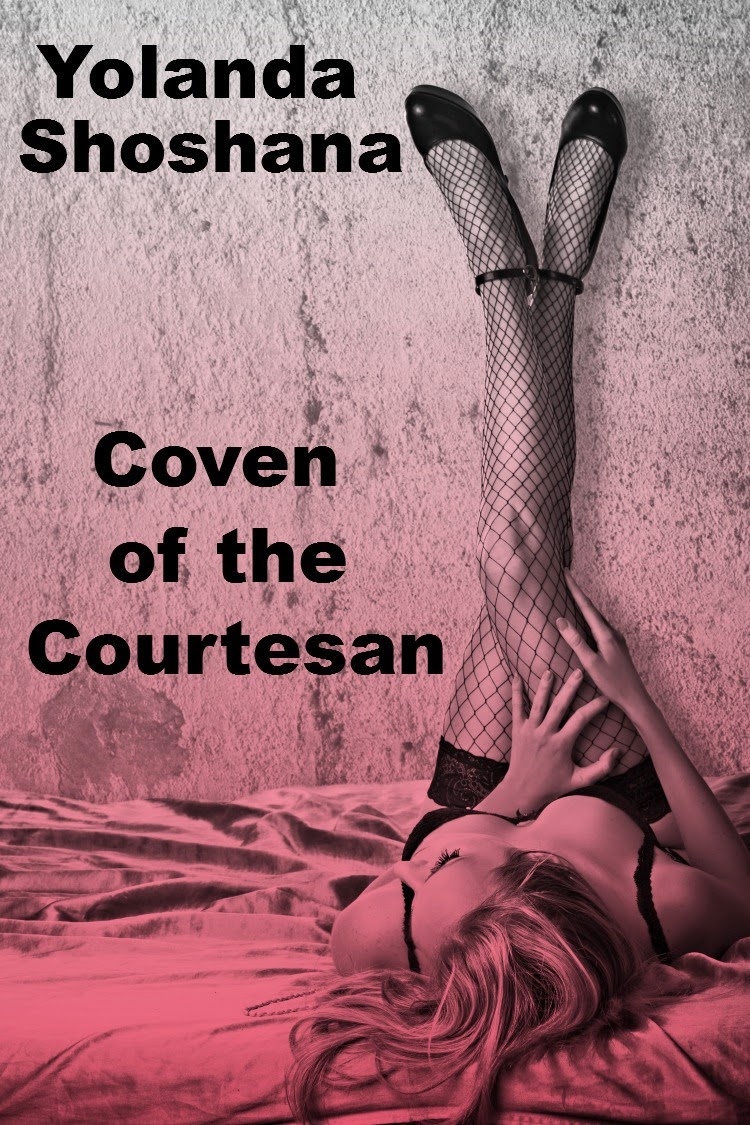 Excerpt:
As Bast Buchanan got closer, she could see the shadow of a man standing in the distance and hear a voice whispering something that she could not make out. All she could tell was that it was a woman’s voice.
"Hello, can you hear me, you called to me,” stated Bast.
The whispering continued and the words flowed faster. Walking over debris in the darkness, Bast moved closer to the voice speaking to the person who was calling out to her. "What are you trying to tell me, can you speak louder?” Darkness and echos filled the space. From the corners of her eyes, Bast could see other spirits moving around her, but she was focused on the voice that was speaking to her.
Every step she took, she began to make out words "By the kissing...." then the words turned back into a whisper. As Bast made it to the door she could see an older woman dressed in a wild colorful outfit. She looked like a rainbow decided to have an orgy all over her body. It was another one of the crazy characters on the lower astral plane connecting with her. Quite often she exercised her witch super powers by astral projecting. There was no telling what or who she would bump into on the astral plane.
"Hello, do you have a message for me or do you need help,” questioned Bast.
"By the kissing of my thumbs something sexy this way comes." said the women with a slight grin on her face. Bast was not sure that the lady meant. She was familiar with the original quote "by the pricking of my thumbs something wicked this way comes" from the witches in Macbeth.
"Ma’am, I don't..." as Bast started to talk, the older lady repeated herself "by the kissing of my thumb, something sex this way comes, you won't know what hit you,” laughed the old lady.
Bast was getting a little creeped out. As she started to move closer to the lady, a black cat jumped on her back. All of sudden Bast was on the Upper East Side of Manhattan in her luxury apartment from her outer body experience. It was time for her to get up and get on her grind. When she tended to stay past her time to rise, her midnight black cat, Kinky, would travel to the astral plane to bring her back.
"Kinky, get your damn tail out of my face. Really, when you come to get me from the plane, can you not jump on me.” Kinky, her diva cat gave a soft me meow as she walked away with her tail sticking straight in the air.
As she sat up in her bed she thought about what the older woman said. It did not make sense. The ring of the telephone caused her to leave her train of thoughts.
"How's my favorite new CEO, today is your big day," said the voice on the other side. It was one of her best friends, Lola Martinez. Every morning they called we other to kick off the day.
"Nothing has been decided, they could go another way.”
"As if,” they said in unison and started laughing.
"Save your lunch plans for me and Pixie. We are going to celebrate with champagne and all the fixins. Call me when the deal is sealed. Besos." said Lola as she hung up the phone.

Bast looked at the clock, she was running late. Pushing the black satin sheets aside, she felt a rush of energy when her milk chocolate toes hit the plush carpet. She looked over at the corner where Kinky was lounging on a chair throwing her tail back and forth. Bast blew her an air kiss, which Kinky ignored. They had a strong telepathic connection so they tended to communicate with each other through actions and not words. The cat was the animal totem for Bast which was appropriate since her name was inspired by the Egyptian cat goddess. After she stepped out of the shower, she started her morning witch ritual. To begin, she sprayed on the goddess magickal mist that she had conjured up with her coven. Her beloved coven was known as the Coven of the Courtesan, it included her and two other witches: Lola Martinez, the Latina firecracker/public relations guru and the world famous blond starlet/syren, Pixie Peppermint Petersen. All three of them were eclectic witches, meaning that they worked with many different beliefs, rituals, and systems in their witchcraft. The magick of their coven used sensual oils, herbs, and crystals. They were three witches who loved to claim their divine feminine powers and sensuality which is why they choose to bring back the art and magick of the courtesans who were thought to be witches themselves. 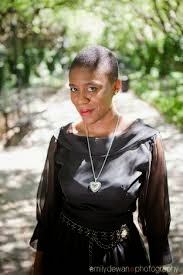 Shoshi is the creatrix of Bruja Bespoke, an apothecary for bodacious and sensuous women. When not creating, conjuring, or interviewing, she can be found officiating wedding ceremonies around New York.