Chained By Desire: The Review 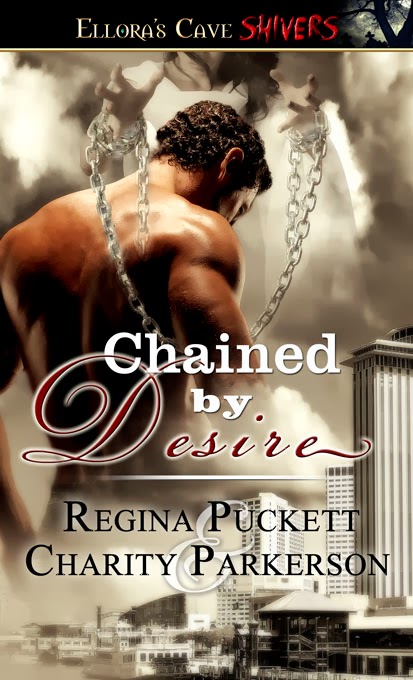 Book 2 in the Seven Levels SeriesNot good enough for heaven but not bad enough to burn, Kylie has a slight problem. She's dead and trapped between the realms.Left with no options, she follows Detective Liam Stone on the hunt for her killer. Death has left Kylie invisible but does nothing to dampen her desire for the sexy detective. Instead, it gives her the freedom to do as she pleases with his body, and what a delicious body it is.Liam’s determined to solve Kylie’s case but as the clues uncover an underground world of demonic torture and pacts, Liam must face his own secrets or the flames of passion won't be the only ones the couple will have to face.Inside Scoop: Parts of this tale are graphically violent, but other parts might leave you drooling for a ghost or a demon of your own. Look out for the brief but hot F/F scenes in the bedroom and the shower.A Romantica® horror erotic romance from Ellora’s Cave

Some books grab you by the hair and keep you up with the e-reader light burning. This was one of them. Kylie has an unfortunate problem. She's dead and the object of her affection is very much alive. Only feeling safe from the demonic force that stalks her when she touches or is close to Liam, the detective on her case, she feels more alive now than she ever did before. When she learns that Liam can not only see her, but feel her as well, the book spins into an out of control sexy romp that curled my toes.

The mystery behind Kylie's death grows deeper as her sister arrives in town. Who are the paranormal creatures involved? When Kylie goes missing and Ann is threatened, things go from bad to worse. Liam will have to confront the reality of who he is and who he wants to become-and that includes having Kylie at his side.

I loved this book and I can't wait to go back and get the first book in the series. These two authors have crafted a world steeped in Cajun magic and otherworldly mysticism that had me enraptured from the get go. Loved it!!! Liam and Kylie rocked my world.