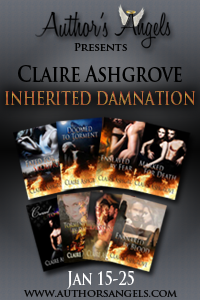 Doomed to Torment
Isolde McLaine left Hatherly Hall and its darkly handsome owner Angus Shaw to escape her incubus father's curse. But when word reaches her that Angus is selling the piece of British history, she returns to talk sense into him. Little does she realized that returning to England will throw her into her sire's vile world and leave her fighting not just her heart and the danger of falling in love but battling to save Angus's son's life.
For three and a half months, Angus has done his best to put Isolde and the one unforgettable kiss they shared behind him. Yet when she returns, scolding him for selling his deceased wife's estate, he's sharply reminded of the passion she awakens inside him. Yet as Isolde pushes for him to leave his son's legacy intact, their battle of wills provokes far more than just desire. His son's nightmares have returned. And Isolde triggered the hellish dreams.
Torn between protecting his child and the love he feels for Isolde, Angus must find the strength to trust in Isolde before her demonic sire claims his son.

Good morning, everyone!  Thanks for hosting me today.  I’m excited to be here, on a new-to-me blog and meet some new faces.

So the topic really fits, because we find “the damned” in a lot of paranormal.  From an authorial perspective, I think you find a lot of “damned” individuals in paranormal fiction (and even a lot of other romance subgenres) because it adds another layer of conflict to a story.  And for me, the more damned the character, the more fun it is to redeem him or her.

And I think Joss Whedon set this up completely with Angel (and to a degree Spike) in the all-revered series, Buffy the Vampire Slayer.

If you consider it, a damned creature usually has one of three issues.  A) their damned state influences their ability to commit to a loving relationship in one way or the other or B) They’re facing imminent death or C) they are dark and ‘rebellious’.  Romance is about redemption.  The heroine or hero “saves” the other – be that emotionally or situationally.  It’s so much more satisfying when the bad boy is saved.  Add in when that salvation comes with the promise of saving someone’s life the romance is that much more important.

As a reader, I enjoy characters that walk a fine line between right and wrong.  Damned characters usually struggle with this, sometimes veering off in the wrong direction, only to be hauled back in line in a quest for ‘right’ by that soul deep yearning for love.  As an author, that fine line gives us more freedom to be creative.  Reactions to any sort of situation can be somewhat larger than life, and they’re plausible if the background is appropriately set forth.

It’s rather a “no holds barred” situation that rings reminiscent of the rebellious Regency rake who wants nothing to do with societal conformity.  But instead of saying “he just doesn’t” the damned aspect gives legitimacy to the proverbial rake’s solitude.

I mean, think about it – at some point in life weren’t you fascinated with the bad boy, and the idea of converting him to ‘good’?  I know I for one was in my younger days.

I’d love to hear your thoughts!

a Rafflecopter giveaway
Posted by Erzabet Bishop at 2:30 AM