From the Boots Up 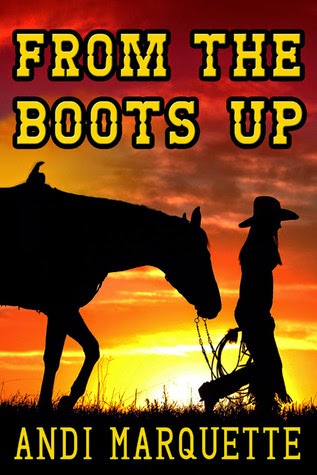 Meg Tallmadge has more than enough on her plate. She’s finishing up a college degree, getting ready to apply to vet school, and working another summer with her dad, Stan, on the family ranch in southern Wyoming. He’s managed to get the Los Angeles Times to send a reporter out to do a story on the Diamond Rock, which doubles as a dude ranch. Meg knows the ranch needs all the publicity it can get to bring in more customers, but she’s not looking forward to babysitting a reporter for a week. When the originally scheduled reporter can’t make it, Meg worries that they won’t get a story at all, which is worse than dealing with a city slicker for a few days. Fortunately for Stan and the ranch, the Times finds a replacement, and Meg prepares to be under scrutiny, under the gun, and the perfect hostess. She knows what this opportunity means to her father, and she’s hoping that if it goes well, it’ll ease some of the distance between them that resulted when she came out a few months earlier.
What Meg’s not prepared for — and never expected — is the reporter herself and the effect she has on her. In spite of what she feels, Meg can’t risk the fallout that could result from overstepping a professional boundary. But as the week draws to a close, it becomes clear that not taking a chance could be the biggest risk of all.
Novella, 35,000 words (about 180 Kindle Fire pages)

This book hooked me right from the first page. Meg was a character that drew me in and I found myself rooting for her. In the book Meg has just come out to her father and feels torn between disappointing him and living the life she wants to live. When a reporter shows up to do the story and ends up being the woman Meg helped out with car issues, she is one cooked goose. Can she fight the attraction to the fiery reporter or give in to the feelings bubbling up inside of her?

The chemistry between the characters.

There were some minor editing points that didn't change how I felt about the story at all.

Email ThisBlogThis!Share to TwitterShare to FacebookShare to Pinterest
Labels: Andi Marquette, cowgirl, From the Boots Up, lesbian