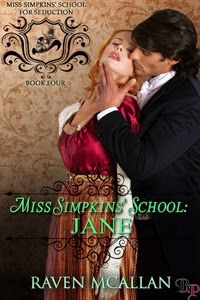 Molly Simpkins' School for Seduction has helped many ladies of the ton to achieve their hearts desires, so helping Lady Jane Nicholby ought to be easy.
However, this young widow's deep, dark secret means she can never remarry for fear of the scandal it would cause. Widows are not supposed to be virgins, after all.
Fortunately, Molly knows just the person to help her change this state of affairs. Persuading Luke De Freitas to fall in with her plans, though, will require all of her considerable skill.


A spot of blackmail should do the trick quite nicely...

About the author:
A multi-published author of erotic romance, Raven lives in Scotland, along with her husband and their two cats—their children having flown the nest—surrounded by beautiful scenery, which inspires a lot of the settings in her books.
She is used to sharing her life with the occasional deer, red squirrel, and lost tourist, to say nothing of the scourge of Scotland—the midge. As once she is writing she is oblivious to everything else, her lovely long-suffering husband is learning to love the dust bunnies, work the Aga, and be on stand-by with a glass of wine.
Posted by Erzabet Bishop at 1:30 AM