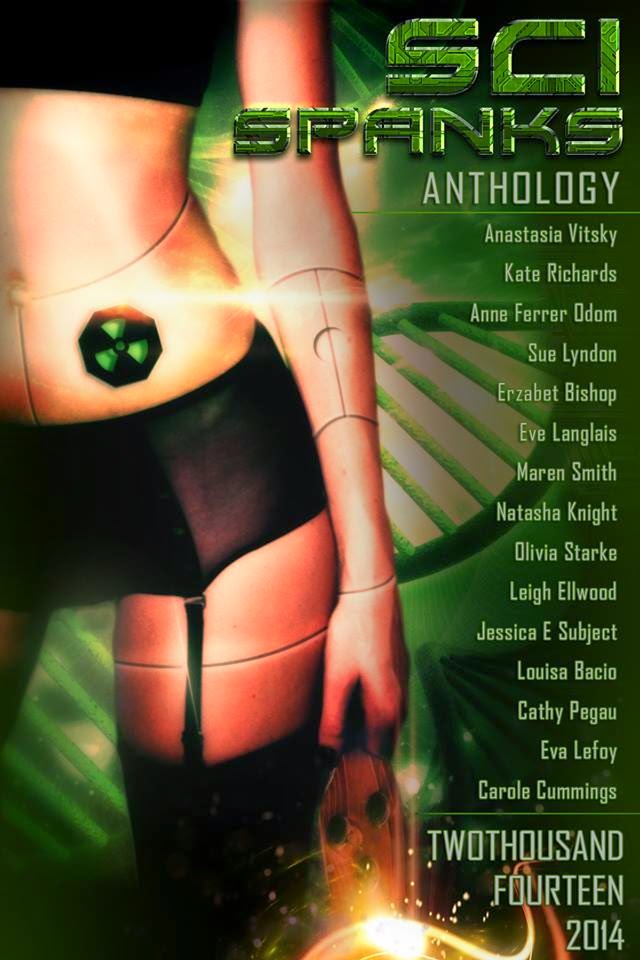 I am thrilled to be a part of the Sci Spanks event and now in this out of this world anthology featuring some of the industries best spanking and sci-fi/urban fantasy authors. Get ready to rev up your e-readers!

Sci Spanks the anthology offers fifteen sexy spanking stories for you in an easy-to-read, portable format. You’ll find everything from sweet, tender romance (Cathy Pegau’s “Jen and Maddy”) to laugh-out-loud humor (Maren Smith’s “Oh What the Hell”) and references to old-school science fiction popular culture (Eva Lefoy’s “Sweet Punishment”). You’ll find a mixture of romantic pairings, from M/F to F/F and M/M. Some stories are harsher (Natasha Knight’s “A Public Caning”) while others appeal to the softest-hearted romantic (Kate Richard’s “The Moon Trainer”). Sit back, relax, and enjoy!
Links:
Goodreads: https://www.goodreads.com/book/show/22712432-sci-spanks-anthology-2014?ac=1


Bred for Love: Tika is Chosen by Eve Langlais
Abducted and raised in a commune on a planet with two indigo suns, Tika has no idea she’s part of a specialized breeding program created to provide healthy human females to men of power in need of a perfect mate.

But Tika has no intention of behaving. What she doesn’t count on is her new owner enjoying the challenge.

Taliasman by Anastasia Vitsky
"If I had been born a boy, I would have followed in my father’s footsteps to become a tradesman. Because I was a girl, he sold me instead."

So begins the tale of Talia, a woodworker's daughter who is sold for a sackful of gold. Queen Vina appears at the cottage of Talia, a nineteen year old whose family is too poor for her to marry. Vina takes Talia to her palace, and the girl discovers unexpected love.

Oh, What the Hell by Maren Smith
May has for a long time now suffered in her attraction to shipmate, Vek. That Vek is a praying mantis-like Klik'vok is entirely beside the point. Her fickle woman's heart has spoken and tonight is the night she's going to do something about it. Because surely, once a woman gets past the whole "bug exterior" thing, then any other obstacles must be easy, right?

Replicated Consequences by Jessica E. Subject
After Darryl Malloy’s wife is killed in combat, he doesn’t expect to find her standing on his door step. Only she is not his wife, but a clone, armed with a paddle.

What's a Moon Colony without a Spanking Franchise? by Kate Richards
But Harlan, a simple college professor and trainee of The Trainer isn't sure how well his tools will work in the lower gravity chosen by the denizens of this strange place. What he needs is someone to try them out on. But the client who presents herself is not exactly the girl next door...

No More Lizards by Sue Lyndon
Anya is determined to help her stern alien husband, Roc, find his sense of humor. Putting a native lizard-like creature known as an ebbra under their bedcovers seems like a good idea. It’s funny. At least Anya thinks so…until her husband decides a certain naughty little prankster needs to go over his knee. Will Anya ever succeed in coaxing a smile out of Roc, or is the cultural divide between them too great to find some common ground?

Red Moon Rising by Erzabet Bishop
When you can’t be who you are where do you turn?
When you thought the love of your life was lost only to find her again how do you choose between yesterday and tomorrow.

A hereditary witch, Detective Devi Watson fought long and hard to become a cop in a witch hating world. Forced to turn her back on her coven and her family she lost everything that mattered most. Her girl Astrid included. Some choices a woman should never have to make. When witches begin to die and Astrid is threatened, the carefully constructed wall around Devi’s past begins to crumble.

Who is she? Hereditary witch or a student of law and logic? Can Devi reconcile the demons that haunt her and face the red moon rising…

Skin by Leigh Ellwood
Different planets abide by different rules, and when Andromeda breaks one she must accept the punishment. When her ship's captain elects to administer the penalty, she finds being the bad girl feels quite good.

Taming the Wolf by Anne Odom
The time machine is broken, and there’s a wolf in the control room. What’s an inventor to do when his project is failing, his lover is wicked, and his patience is stretched?

Research Purposes Only by Eva Lefoy
From my research, species across the galaxy have one thing in common: they all have some hidden kink. Whether its tentacle restraints, breath play or even the more uncommon fire play, they all have tricks up their sleeve. Join me as I visit the Utai and get a first-hand taste of how sweet their punishment for a simple crime can be.

Jen & Maddy by Cathy Pegau
When Maddy stops by her girlfriend's lab, she helps by testing the mind-reading equipment. To her shock, all of her deepest longings are laid bare. Will she scare Jen away, or will they take their relationship to the next level?

Flame on a Fire by Carole Cummings
Exposition and development masquerading as a PWP. Or vice versa. Depending on your perspective. But hey, either way—bondage! 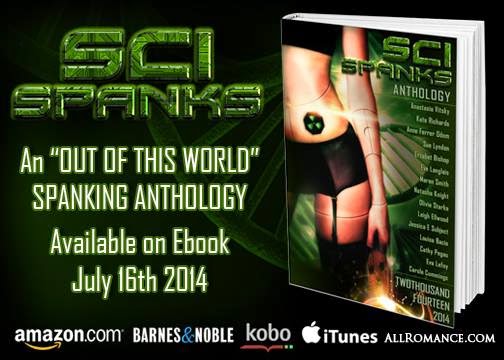