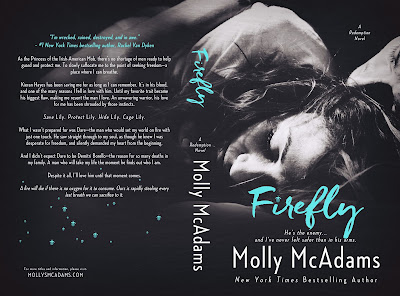 The next captivating installment in New York Times bestselling author Molly McAdams’s Redemption series.
As the Princess of the Irish-American Mob, there’s no shortage of men ready to help guard and protect me. To slowly suffocate me to the point of seeking freedom—a place where I can breathe.
Kieran Hayes has been saving me for as long as I can remember. It’s in his blood, and one of the many reasons I fell in love with him. Until my favorite trait became his biggest flaw, making me resent the man I love. An unwavering warrior, his love for me has been shrouded by those instincts.
Save Lily. Protect Lily. Hide Lily. Cage Lily.
What I wasn’t prepared for was Dare—the man who would set my world on fire with just one touch. He saw straight through to my soul, as though he knew I was desperate for freedom, and silently demanded my heart from the beginning.
And I didn’t expect Dare to be Demitri Borello—the reason for so many deaths in my family. A man who will take my life the moment he finds out who I am.
Despite it all, I’ll love him until that moment comes.
A fire will die if there is no oxygen for it to consume. Ours is rapidly stealing every last breath we can sacrifice to it.

***The Redemption series is a series of romantic suspense standalones***

Receive an alert when it goes LIVE on Amazon

Molly grew up in California but now lives in the oh-so-amazing state of Texas with her husband, daughter, and fur babies. When she’s not diving into the world of her characters, some of her hobbies include hiking, snowboarding, traveling, and long walks on the beach … which roughly translates to being a homebody with her hubby and dishing out movie quotes. She has a weakness for crude-humored movies and fried pickles, and loves curling up in a fluffy comforter during a thunderstorm … or under one in a bathtub if there are tornados. That way she can pretend they aren’t really happening.
Facebook | Twitter | Goodreads | Tumblr | Website | Instagram
Sign up for Molly’s Newsletter