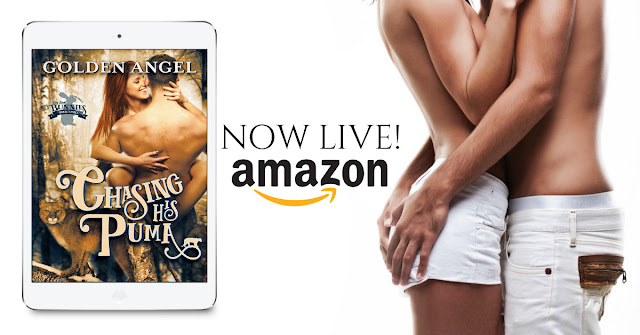 Everyone likes a little tail...
And Doc just might be ready to have hers caught!
Chasing His Puma by Golden Angel is NOW LIVE!
ONE-CLICK IT:
US →  http://amzn.to/2oSQBxs
AU →  http://amzn.to/2D8xHHo
CA →  http://amzn.to/2tqNuBM
UK →  http://amzn.to/2FkXstZ
KU subscriber? READ IT FOR #FREE!!!
BLURB:
Can a cynical mutant bunny-bear who never smiles find love with an eternally optimistic puma?
Kidnapped as a teenager along with his siblings, experimented on and turned into a mutant shifter, rescued, trained, betrayed by a teammate, and brutally injured before being rescued again... any optimism Brock Bunson ever had has been hammered out of him by life.
Then there's Doc - who knows all she needs is faith, trust, and a little bit of pixie dust, and is firm believer in happily-ever-afters. The only mystery about this puma shifter is why no one knows her real name.
When they're sent on a mission together will their different natures be their downfall or set off enough sparks to set the forest ablaze?
Chasing His Puma is the third book in the Big Bad Bunnies series - a steamy standalone romance with a guaranteed HEA! Warning: May contain a dangerously high dosage of Monty-Python and Disney references.
GET MORE BIG BAD BUNNIES!
Chasing His Bunny - Book 1
Amazon → https://amzn.to/2IYd6cO
Audible → https://amzn.to/2GCazqo
Bethany's not interested in finding her fated mate. But when Steele Raymond accidentally rescues her and her mixed pack of shifters from captivity, she can't ignore the desire he stirs in her. And Steele just might be tenacious enough to convince her that theirs is truly a mate bond.
Chasing His Squirrel - Book 2
Amazon → https://amzn.to/2GjSyd4
Audible → http://amzn.to/2DOaPwT
Brady can't seem to stay away from Jesse, but can he really claim her as his own when he's about to go to war...?
About Angel
Angel is a self-described bibliophile with a "kinky" bent who loves to write stories for the characters in her head. If she didn't get them out, she's pretty sure she'd go just a little crazy.
She is happily married, old enough to know better but still too young to care, and a big fan of happily-ever-afters, strong heroes and heroines, and sizzling chemistry.
She believes the world is a better place when there's a little magic in it.
Find Angel Online!
Amazon → http://amzn.to/2DplX3X
BookBub → http://bit.ly/2G68e3O
Goodreads → http://bit.ly/2rt4rdL
Facebook → http://bit.ly/2Ds7c0e