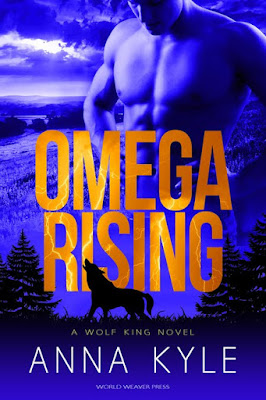 Blurb:
Cass Nolan has been forced to avoid the burn of human touch for her whole life, drawing comfort instead from her dreams of a silver wolf—her protector, her friend. When her stalking nightmares return, her imaginary dead sister’s ghost tells her to run, Cass knows she should listen, but the sinfully hot stranger she just hired to work on her ranch has her mind buzzing with possibilities. Not only does her skin accept Nathan’s touch, it demands it. Cass must make a decision—run again and hope she saves the people who have become her family, or stand and fight. Question is, will it be with Nathan or against him?

Nathan Rivers’ life is consumed by his quest to find the Omega wolf responsible for killing his brother, but when the trail leads him to Cass and her merry band of shapeshifters, his wolf wants only to claim her for himself. When evidence begins piling up that Cass is the Omega he’s been seeking, things become complicated—especially since someone else wants her dead. Saving her life might mean sacrificing his own, but it may be worth it to save the woman he can’t keep from reaching for.

Excerpt:
He gestured toward the desk again, his eyebrows lifting at her obvious reluctance. Well it could only take a few seconds or so to place a bandage and he smelled so damn good. She settled herself on the desk and held out her hand. He was so close she imagined she could feel the heat of his body warming her skin. His thumb smoothed the edges of the criss-cross bandage while his other hand held hers loosely. Cass tensed, ready to yank her hand away. Nathan looked at her, questioning, she guessed, how she got the scrape.

“Misjudged the wall.” Her voice was unsteady as she tried to ignore the shooting tingly little sparks fanning out from his touch. His large tanned hand enveloped hers loosely, turning it over to trace her palm. Cass’s apprehension grew and she braced for the inevitable burn, her brain automatically rifling through the best maneuvers to pull herself free. The clunky phone on her desk could be a weapon and the letter opener was lying within easy distance. A bonk on the head or stab in the throat, if her gut had massively misjudged his character, would gain her freedom.

His hold didn’t tighten. Five seconds, ten, still nothing. Fifteen, twenty. She wanted him to let go yet clung to the warmth and texture of his skin. Her breath came faster but it wasn’t nerves alone. His finger traced a small cut on the pad of her ring finger and he looked up again.

“Pa-paper cut.” He grabbed an antiseptic square, tore it open with his teeth to keep his hold on her hand. Soon that cut was cleaned and covered. Her insides shivered as his hand glided over her forearm, pushing up the sleeve of her hoodie. Her skin soaked in the roughness of his palm and reached for the heat in his touch. Ninety seconds. She stared at his large, tanned hand stroking her pale forearm, the pure pleasure of it making her light-headed.

“You’re trembling,” he murmured as he continued his exploration, finding a larger angry red line with bruising around it. He traced it gently.

Nathan chuckled, the sound raspy as if he hadn’t found much amusing for a long time. Cass stared, transfixed. He was already the best looking man she’d ever seen, but with the smile softening his features for a moment he was devastating, the crinkles at the corner of his eyes positively kissable. Her heart flipped in her chest.

He pressed his lips against her palm, taking a deep, ragged breath. His nose and lips were hot and she waited, quivering in anticipation.

1.       How did you start writing erotic romance?
Paranormal romances and urban fantasies have been a staple of my book diet for years. Yum. I gobble them up like peanut M&Ms. When I began writing a novel, I didn’t even consciously decide. It’s write what you love, right? Well I love paranormal romances. I love the steamy scenes in paranormals but it’s the romance between the two main characters that does it for me. The chemistry between them is sooo important. Swoon.
2.       Plotter or pantster?
Omigod plotter. I’m writing a series so outlining is a must. I need to know where the story is going or I end up writing pages and pages that go nowhere and I have to delete them. I HATE deleting entire scenes. That’s not to say that my characters don’t sashay off my outline while flipping me the bird, because they do. I just adjust my outline to their new heading if I can make it work.
3.       What are three things you have on your writing desk?
My smiling garden toad wearing a DREAM sash like Miss America. A disorganized stack of spiral notebooks (just one pen, though, which is a problem I ought to fix).  Aveeno lavender scented lotion.
4.       Favorite food?
Pizza. Bad pizza is a big disappointment but good pizza is a slice of heaven (bad pun intended).
5.       Tell us a little about your new release. What character in the book really spoke to you?
Omega Rising is a paranormal romance set at a stable. Soon after stranger Nathan Rivers arrives, stable owner Cass Nolan is thrust into the Endless War between shapeshifters and magic-users she never knew existed.  Cass must make a decision to run again from the evil stalking her or stand and fight - with Nathan or against him if she can't convince him she is not the Omega he's vowed to destroy. It’s a story of secrets and shapeshifters, romance, with some mystery and magic.
I enjoyed figuring out Nathan, how he became the man he is and why he makes the choices he makes. He’s a fairly dark character (with good reason) but the book has a lot of humor in it, too. I love how Cass, even with her own troubled past, makes him rethink everything he’s ever known and see what life could be through her eyes.
6. I write because ____... creating memorable stories and characters is insanely gratifying. Truly.
7. What is your favorite type of character to write about?
Okay, this surprises me. Although I adore the smart, funny heroine who doesn’t wait for a man to fix the problem, I had a blast writing a darker character like Nathan. Lake, the hero from Skye Falling, is more easy-going. Nathan has an edge that tickles my fancy.
8. What is the sexiest scene you ever wrote?
There’s a scene in Omega Rising where Cass and Nathan are sparring in the yard. When he finally takes her down (and he makes sure he is on top of her, naturally). Cass is unfazed by the defeat and laughs which takes him by surprise. He lets himself explore her. It’s a short scene but I think it changes them and it’s sexy.
9. What advice would you give new authors in the erotica/romance field?
Read for pleasure, read for research, read everything you can. Also, don’t give up when your first draft sucks. That’s was first drafts do. It takes work to make it shine.
10. What is next on your writerly horizon?
Currently, I’m working on two projects. One is book three of the Wolf King series and one is magical romance novella trilogy. So much fun!

Author Bio:
Anna Kyle wrote her first story at age 12 on an old manual typewriter, and though the technology has changed, she hasn’t stopped since. She lives in the Midwest surrounded by family and friends and dogs and horses. They’ve forgiven her (mostly) when they appear in her stories. She reads everything she can get her hands on, but romances, especially paranormals, are her favorite. Vampires, humans, Fae, shapeshifters, or demons, it doesn’t matter—Anna’s heart goes pitter-pat for the Happily Ever After. Hot heroes + strong, funny heroines = awesome.
Social Media Links
http://www.twitter.com/sandsoftime5050
http://www.annakyle.com