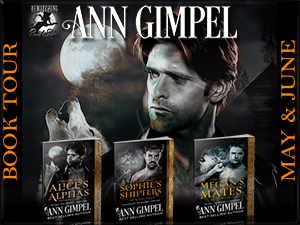 It’s 1936. Thirty-year-old Alice has given up on finding a husband. Between civil engineering and mountain climbing, her interests are so masculine, she scares men away. A poor route choice strands her—lost, hungry, and scared—next to Lon Chaney’s cabin deep in the Sierra Nevada Mountains.

Jed senses a woman stumbling down the steep, inhospitable mountain behind his borrowed cabin. Her scent tantalizes and excites him. Mates are scarce these days, and if his nose is right, she’s his fated one. His and his two pack mates, that is, who are mercifully gone at the moment. Jed crafts a careful strategy, knowing the mate bond might not be enough to convince her to stay once she finds out it will link her to all three of them—forever.

Alice adds Jed to her list of problems when he melts out of the shadowed darkness. At first she declines his offer of help, but he keeps talking until she ends up inside the cozy log cabin in front of a roaring fire. His skilled hands and a shot of whiskey heat her blood to molten, and her carefully tended world explodes into desperate hunger to make love with the man rubbing her weary feet.

As caught up in lust as Alice, Jed takes a chance. A big one. Will mating with her before disclosing everything turn out to be a huge mistake?

After witnessing what might’ve been a murder, Megan is frantic to escape the Garden of Eden cult, so she catches the night train north out of town. Her lifetime commitment to the cult may well be her death sentence, but she’s not sticking around to let them frame her.

Wolf shifters, Les and Karl, eke out a primitive existence on the flanks of the Canadian Rockies. Between Hunters who want to kill them and a wildfire raging out of control, they’re glad when Jed, their clan leader, shows up. And even more delighted when they see who’s in his car.

Jed’s mate, Alice, spied Megan by the side of the road looking lost and desperate and offered her a ride. Before Jed’s car even stops rolling, Les and Karl know she’s their mate. So skittish she’s barely willing to exit the car, Megan busies herself helping Jed and his pack mates unload supplies. Can Les and Karl convince her to join her life to theirs? If she does, will the risks she faced as a cult member pale in comparison to being mated to shifters?

Late 1930s, California.
The winds of change are blowing hard as shifters gather deep in the Sierra Nevada Mountains for a war powwow. Tempers run high as they argue their next move.

An unexpected attack from more Hunters than they’ve ever seen forces their hand, and Blake, alpha for the coyote clan, fights alongside his brothers. He’s grimly pleased when every single one of their enemies is finally dead, the bodies chucked into glacial crevasses.

Sophie Laughing Wolf tracked her hated brother into the mountains. Gifted with foreseeing, she wants to make certain he ends up just as dead as he was in her vision. When the large group of men he’s with are set upon by shifters, mythical dual-natured beings who can take animal forms, she hides, calling on earth power to shield her.

It doesn’t work. Two shifters, back in their men’s bodies, haul her from her hiding place once the battle ends and drag her before their chief. He spares her life—for now—but she senses the animosity the others have for her. They see her as a threat, a witness to multiple murders.

When the mate bond strikes, she fights its pull. So does Blake. He can’t believe the gods would be so cruel as to bind him and his lieutenants to a woman with blood ties to Hunters—their ancient enemy. She runs from her fate. So does he, but the bond burns bright, transcending everything.

About the Author:
I'm basically a mountaineer at heart. I remember many hours at my desk where my body may have been stuck inside four walls, but my soul was planning yet one more trip to the backcountry.

Around the turn of the last century (that would be 2000, not 1900!), I finagled a move to the Eastern Sierra, a mecca for those in love with the mountains. Stories always ran around in my head on backcountry trips, sometimes as a hedge against abject terror when challenging conditions made me fear for my life, sometimes for company.

Eventually, the inevitable happened. I returned from a trip and sat down at the computer. Three months later, a five hundred page novel emerged. It wasn’t very good, but it was a beginning. I learned a lot between writing that novel and its sequel, and I've been writing ever since.

In addition to turning out books, I enjoy wilderness photography. A standing joke is that over ten percent of my pack weight is camera gear, which means my very tolerant husband has to carry the food -- and everything else too.

This series is hot! If you love a different fix on wolves with an author who knows how to spin a good tale, then you won't want to miss this. This author is on my must reads list and I can't wait to dive into these beauties again for a smoking hot re-read. *once is never enough*