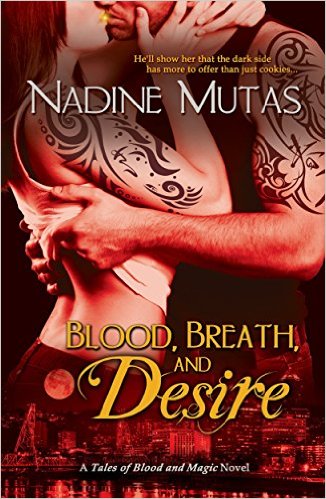 Press Release:
The hot paranormal romance Blood, Pain, and Pleasure is the first book in the all-new series Tales of Blood and Magic featuring sexy, alpha-male demons and the strong-willed, spunky heroines who bring them to their knees.
Following her lifelong passion for stories and languages, polyglot Nadine Mutas went from tangling with tongues at a translation agency to wrestling with words in her writing den. She pens wickedly sensual paranormal romances, and her debut novel, Blood, Pain, and Pleasure won several awards for excellence in romance writing, including the Golden Quill 2016 for Paranormal Romance, and is a double finalist in the PRISM awards 2016. 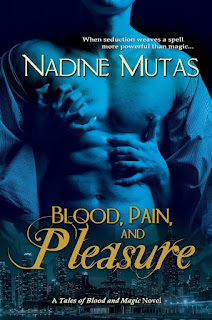 Blood, Pain, and Pleasure
Book 1 in the Tales of Blood and Magic series
When seduction weaves a spell more powerful than magic…
Desperate to save her demon-abducted sister, witch Merle MacKenna breaks the law of her Elders. As a last resort to track down the kidnapper, she unleashes another demon, Rhun, from the magical prison of the Shadows. Determined to bind him again after he helps her, Merle vows to keep him tightly controlled. Easier said than done when her own personal demon is hellbent on charming his way into her pants—and her heart. 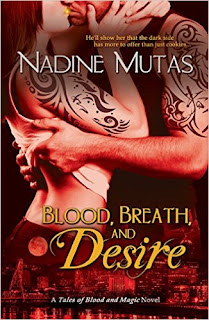 Blood, Breath, and Desire
Book 2 in the Tales of Blood and Magic series
He’ll show her that the dark side has more to offer than just cookies…
An attack with mysterious dark magic turns young witch Lily Murray into the very being she’s been fighting all her life – a demon. While struggling with her new dark instincts – and desperately trying not to kill her loved ones – she unwittingly earns the protection of a male of her demon species. He’s more than happy to help her out and show her the ropes. He’s also decidedly too gorgeous to handle.
Alek Kuznetsov has finally found the perfect mate: beautiful, smart, funny, and of course a pranagraha demon like him. The only problem: She wants to become a witch again, and if she does, they can’t mate. Solution: While he offers her help in finding the reversion spell, he in fact sets out to convince her that staying on the dark side has more perks than just cookies.
Warning: Includes a kick-ass heroine who loves to snark and curse, a demon hero who is as stubbornly determined to win his female as he is heart-stoppingly hot, and lots of laugh-out-loud moments and sexy action. Proceed with caution and a cold drink at hand.
Blood, Breath, and Desire is available on Amazon, iBooks, Kobo, and Barnes & Noble.
Goodreads link: https://www.goodreads.com/book/show/26369652-blood-breath-and-desire 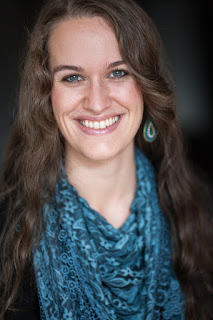 
Polyglot Nadine Mutas has always loved tangling with words, whether in her native tongue German or in any of the other languages she’s acquired over the years. The more exotic, the better, she thought, and thus she studied the cultures and languages of South Asia and Japan, leaving university with a degree in intercultural communication and a head full of rich, Asian mythology. She worked at a translation agency for a short while, putting to use her knowledge of English, French, Spanish, Japanese, and Hindi.
Before long, though, her lifelong passion for books and words eventually drove her to give voice to those story ideas floating around in her brain (which have kept her up at night and absent-minded at inopportune times). She now writes paranormal romances with wickedly sensual heroes and the fiery heroines who tame them. Her debut novel, Blood, Pain, and Pleasure, won the Golden Quill 2016 for best Paranormal Romance, and is a finalist in the PRISM contest 2016 for Dark Paranormal and Best First Book. It also won several awards for excellence in unpublished romance.
She currently resides in Oregon with her college sweetheart, beloved little demon spawn, and two black cats hellbent on cuddling her to death (Clarification: Both her husband and kid prefer her alive. The cats, she’s not so sure about.)