A deal with the Devil. Demons haunting your every step. When an Angel offers you the chance to redeem yourself, you take it. Because eternal damnation isn't all it's cracked up to be.

But the Devil always gets his due.

On the streets of Baltimore redemption is..... Payable On Death.

From the first page I was hooked. The desciptions of the city, from the crime to the streets and the pain of someone who knows the rough side of family life, this book grabbed me. I wanted to scream with Jacqui when she was faced with the decision to go with the oh so perfect stranger on the chance she could save her mother from the monster who was her husband. Wow.The cover also struck me, reminding so much of the Diana Rowland zombie books-so of course I was gonna give this one a shot before the first word hit my eyeballs. 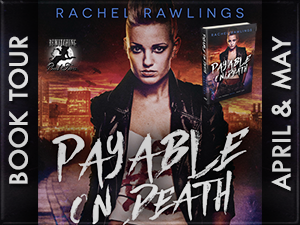 Rachel Rawlings was born and raised in the Baltimore Metropolitan area. Her family, originally from Rhode Island, spent summers in New England sparking her fascination with Salem, MA. She has been writing fictional stories and poems since middle school, but it wasn't until 2009 that she found the inspiration to create her heroine Maurin Kincaide and complete her first full length novel, The Morrigna.

When she isn't writing, Rachel can often be found with her nose buried in a good book. An avid reader of Paranormal/Urban Fantasy, Horror and Steampunk herself, Rachel founded Hallowread- an interactive convention for both authors and fans of those genres.

More information on Hallowread, its schedule of events and participating authors can be found at www.hallowread.blogspot.com  and www.facebook.com/Hallowread .

She still lives in Maryland with her husband and three children.