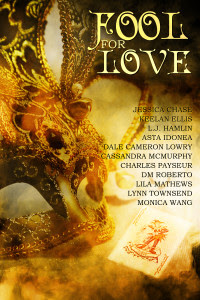 Not every love story starts out pretty, and Fool for Love has plenty of pranks, blunders, and misunderstandings to prove it. Whether it’s two college students assuming the worst or a visit from “The Trickster” himself, this collection of romantic near-misses and second chances shows that a rough beginning might very well lead to the happiest ending of all. In Can’t Stand the Heat by Keelan Ellis a not-so-friendly prank on a would-be sous chef’s competition goes too far, and backfires in more ways than one. L.J. Hamlin’s Cherry Bomb introduces us to a world-weary Dom and a young fraternity brother who get off on the wrong foot, but learn that trying something new might be exactly what they need. In Coffee and Chaos by Jessica Chase, an ambitious detective believes that his new partner is a joke, but soon realizes that he may not be quite so perfect himself. In Lynn Townsend’s Had Me at Cheese Fries, an orderly and a nurse discover that, if they can survive April Fool’s Day in the emergency room, they can make it through anything, as long as they do it together. In Kangaroos Next 200km by Asta Idonea, a young man learns that taking a drunken dare in the outback might not have been a very wise thing to do, but being rescued by a sexy, older trucker on a tight schedule could be the best thing that’s ever happened to him. A secret admirer teaches a Valentine’s Day-hating baker that romance isn’t dead in Moonlight Masquerade by D.M. Roberto. In DC Lowry’s Rough Love, two college classmates discover that being perfect for one another may not be enough to keep them together unless they learn how to communicate before things fall apart. Fifteen years is a long time to make up for, but in Lila Mathews’ Rough Waters, two former best friends realize that forgiveness is sometimes the only way to a new beginning. In Tomatoes and Mangoes by Monica Wang, two geeky game-night enthusiasts discover that nothing says “I love you” like a never-ending stream of tricks and teases. An unexpected encounter turns a college student’s ideas about his own sexuality inside out in Cassandra McMurphy’s The Date. Nothing would delight Loki more than humiliating the god of thunder himself in Trickster69 by Charles Payseur—too bad his heart won’t get with the program. Love is love—no matter if it happens by misdeed or mayhem—and these short stories cover it all. From uncertain flirtations to the most determined pursuits, everyone has the potential to be a Fool for Love in the end.

From Monica Wang’s Tomatoes & Mangoes: Having completed the uneven trade, Kei acquired Becca’s resources and soundly defeated everyone, especially Becca. Even as she was gloating, Kei stayed fixed to her exact place on the couch. She wondered if Becca noticed at all that their legs were still in contact, however minor. Or, on a negative note, what if Becca just didn’t move away because it might have seemed impolite? “Good game,” Becca beamed at her. She didn’t seem to mind that Kei lied to her about the wheat, though she wasn’t a competitive player to begin with; for most of the games, only Cory and Kei fought to win. “Thank you,” Kei said. With the distraction of the game gone, she was almost painfully aware of the gentle warmth emanating from Becca and flowing into her. Although the contact point between their thighs was limited, Kei could feel her body reacting in several other places where tension and heat were building into a wonderful sort of discomfort. She hadn’t felt like this since her early teens. She hadn’t felt like this about anyone ever. When Cory came over and split them up by walking across the couch in heavy, wobbling steps to grab a game guide from the shelf on the other end, Kei could have beaten him with the hardcover tome. Never mind that he was the one who introduced them in the first place and continued to bring them together week after week. Since Becca rarely sent her messages, Kei tried not to send her too many, either, not wanting to be a bother. One of her favourite text conversation with Becca was from the night there was a low-magnitude earthquake in their city. Did you feel the earthquake just now?! Scary! Nope, Kei wrote back. She had been eyeing the coffee table before her, wondering if she should pull out all the clutter under it so she could Duck and Cover in case of an aftershock. Now she cast earthquake safety aside and tapped out on her phone: Are you okay? Feeling like there’s an earthquake is a symptom of the flu that’s been going around.

Rafflecopter Prize: One winner will be selected to win an eBook copy of Fool For Love a Rafflecopter giveaway