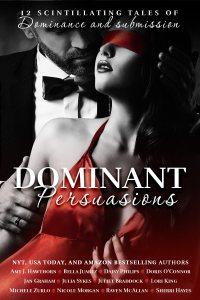 Featured Novellas:
Submission Dance by Lori King
Out of Order by Bella Juarez
Surrender Her Inhibitions by Nicole Morgan
Make Believe Submissive by Daisy Philips
Under His Protection by Doris O’Connor
Broken by Julia Sykes
The Sub That Got Away by Amy J. Hawthorn
In His Hands by Raven McAllan
Indulge by Sherri Hayes
Submitting To Temptation by Jan Graham
Fire and Ice (An Excerpt from KNOTTED) by Juliet Braddock
Yes, Justin (Expanded Edition) by Michele Zurlo

Blurb for Surrender Her Inhibitions by Nicole Morgan

Three years ago Sophia Hunt was on the tail end of a bad break up and in a vulnerable and confused state of mind when she crossed paths with the sexy and seductive J.T. Mastrantonio.
Stuck in a rut and no longer satisfied with his successful life, J.T. finds an unfamiliar ache when the scared girl who ran out on him years earlier walks back into his life.

Though time is not their side, Sophia is faced with the realization that her biggest fears and greatest temptations are one in the same. And only J.T. will be the one who can get Sophia to surrender to her inhibitions.

Enjoy this excerpt from Surrender Her Inhibitions by Nicole Morgan 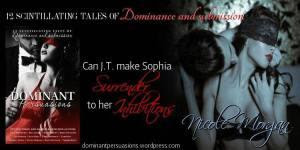 J.T. was going wild inside. His body and mind were fighting some sort of battle between good and evil and he had no idea who would win. All he was certain of was that he had to feel Sophia’s naked body against his. It didn’t matter how much his body ached or how hard his cock was. He had to wait. He had to be patient and not push for too much too fast. Time already wasn’t on his side. Pushing her was a luxury he didn’t have.

Sweat dripped down his chest from lack of control. He looked down at the top of her head as she seemed to nuzzle up against him. Her precious movements of needing to be close to him were almost more than he could take.

He took her face in his hands, gently cupping her cheeks. “Yes. I promise. I will not hurt you.”

Her question surprised him, but it made him curious all the more. “Other stuff? Like what?”
“If there was something that I…”

She looked at him for a long while before moving from his hold. At first, he didn't realize what she was doing. Instinctively he wanted to grab her and keep her from running away for the third time. That was before he watched her drop to her knees on the plush white carpeting and nestle herself between his legs.

She looked at up him. Her brown eyes looked like swirling lakes of milk chocolate, swimming with sweet decadence.

He knew what she wanted. And he didn’t know how he knew, but he was certain she had no idea how to take it.

With his restraint already walking a tightrope between pleasure and pain for the past hour plus he saw no reason to make both of them suffer, so he did what every good man would do and offered her a hand.

Damn if her mouth didn’t look like it was going to be the best kind of torture.

He waited, wondering if she would protest with those old fears rearing their ugly head. Instead, she just bent her head down and swiped her tongue across his head.

“Uh uh.” With his gentle but firm hold on her cheek, J.T. gently guided her down to his cock. "You're not done baby. Suck on my cock. Show me why that pussy gets so wet."

He knew he had been taking a chance getting quite so graphic with her, but the true nature of who he was came to the surface. And damn if she didn't seem to like it because she opened her mouth wide and took him deep in the first attempt. Her mouth sucked him so intently that he would’ve given anything to keep her from stopping, but his need to bury his cock inside her pussy was nearly overpowering him and wreaking havoc on his normally in control sex drive.

She let out a whimper, interrupting him from his thoughts. He loved how he was finding so much about her in such a short time. Her zeal in taking him showed him just how hungry and thirsty she truly had been for his cock.

She was such an incredible contradiction that he wanted to learn more about her with every moment that passed. She may not know it yet, but her appetite for sex had to be just as big as his. Almost, but not quite. No one could ever quite match up to how hungry J.T. could get. Maybe with Sophia, he'd finally meet his match.

His need to see her eyes while she took him into her mouth over and over again surprised him. There was something about the innocence of her stare that made him crave that attention.
"Look up at me," J.T. told her

As if they'd been lovers for a long time she did exactly as he asked. Out of all the women he played with, Sophia was different. Why he had no idea. And he wasn't even sure it was a good thing. He kept women at arm's length for a very important reason. Their mere presence could be complications in themselves. His job was stressful enough. He didn't need to deal with the hassle of dating and relationships.

While he watched her head move up and down, her brunette hair shining in the bedroom light, he was struck by her beauty. For the first time, he realized that she was wearing nearly no makeup. He was used to women who piled it on for that flawless porcelain doll look. That wasn't what he was seeing before him with Sophia. Her face was flawless in a different sort of way. Her cheeks were flush from passion, desire, and with the blush of orgasm. She was glistening with sweat. Her hair was a mess and as he watched her, he realized that she was probably one of the most beautiful women he had ever seen.

Despite her beauty and charm, one of her most alluring traits was the way her mouth was holding him so exquisitely in her grasp. As she looked up at him he couldn’t help but be entranced by the expression her face held. Her cheeks were sunken in, her lips clasped tightly shut around his cock as she twisted her head in a side to side motion while bobbing her head back and forth down onto his entire length.

Sophia Hunt. Whoever she was, was a fucking goddess.

Blurb for Indulge by Sherri Hayes

Logan Mattson has been dating Lily Adams for a year and he wants to do something special for their anniversary. What better way to celebrate than to take her away for the weekend and indulge in all her kinky desires?

Enjoy this excerpt of Indulge by Sherri Hayes 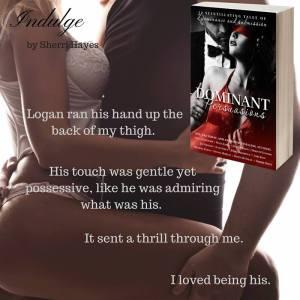 I shook my head. Even though I was wearing a skirt, there was heat in the tramcar. Besides, I was used to my legs being uncovered most of the time. I wore a skirt to the office almost every day.

He bent his head to kiss me. It was soft and full of gentle suction.

There was a slight jerk as the tramcar eased up next to a booth similar to the one at the bottom of the mountain. A woman approached us and opened the door so we could exit.

Logan went first and then helped me out.

“Thank you, Sir.” The woman seemed unfazed by my response. She probably figured it was said in teasing because he was being a gentleman helping me out.

He grinned and tucked my hand in the crook of his elbow as we strolled into the chalet. It reminded me of our cabin with all the wood everywhere, but it was larger. There was a place for people to buy souvenirs, tables where people could sit and eat, and even a small sitting area.
We browsed the souvenirs but didn’t find anything that interested us. Eventually we ended up out on the deck that overlooked Lake Superior. He stood behind me, his arms wrapped around my waist.

“It’s so peaceful here,” I whispered.

Logan hummed as he rested his chin on top of my hair.

“Can I ask you something?”

He gave me a little squeeze. “You can ask me anything.”

“If it hadn’t been for Stephan, would you have embarked on this lifestyle with me? I mean, if we’d just met randomly, dated, and then I told you that’s what I was into, would you have given it a try? Or would you have run away from me as fast as your feet could take you?”

I felt his chest vibrate a little before his lips pressed against the top of my head. “I wish I could say that I still would have given us a shot, but I don’t know. When we met, there was this instant connection I felt to you . . . one I couldn’t explain. Maybe that would have been enough for me to try and give you what you needed. I’d like to think so.”

I turned in his arms and laced my fingers behind his neck. “But?”

Logan smiled. “But having Stephan to help me understand the hows and whys certainly make it easier. I don’t think we’d be where we are today without his assistance.”

Standing up on my tiptoes, I brushed my lips against Logan’s. “Guess I owe him a big thank you, huh? Maybe do something special for him?”

Logan dug his fingers into my skin and a sound almost like a growl bubbled up from his chest. He pressed my body flush against his. He knew I was teasing, but there was a part of him that still got jealous when it came to Stephan and me. I had played with Stephan first, after all.

I rubbed my hands up and down Logan’s back. His pupils dilated and I felt myself grow wetter. Why did his acting like this turn me on so much? I knew as an independent woman it shouldn’t, but that didn’t make the evidence to the contrary go away.

He grabbed my ass and plunged his tongue inside my mouth at the same time. “Mine.” He gasped as he came up for air and then dove back in. It was a good thing we were the only ones out on the deck at the moment.

This is one of those reviews that could be summed up in one word. Hot! This anthology is toe curling and I couldn't stop reading it. Page after page of Dominants that will stay in your dreams long after the last page is done.