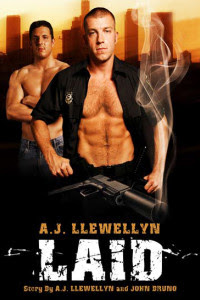 From the mind of gay porn director John Bruno comes the first book in the Laid series, penned by author A.J. Llewellyn… Jack Cannon is an elite member of LAPD's new Violent Crimes Unit. He's tough, he's smart...he's also gay. Jack's a guy who deals with pressure and stress by cruising. When he has a fling with a hot guy one even hotter night in Los Angeles, it's no casual coupling. This guy is great. Jack wouldn’t mind seeing him again except he's discovered he'll be seeing a lot of him. This is Lucio Natale, the most violent mob boss ever to land in the city of angels. He’s the guy Jack's supposed to tail—and preferably kill. Previously Published by Stiff Rain Press.

I flashed my membership card. The twink on the front desk smiled at me. He was a sweet little cocksucker who reminded me a lot of my favorite gay porn star, Leo Giamani, but I wanted to scope the locker and steam rooms. There were a few loiterers in both, nothing worth investigating. I was starting to think my urge for a hot fuck after the biggest haul in my personal memory was going to be a bust. And then, I saw him. Man, he was hot. He had a body that appealed to my sense of aesthetics. His skin tone was the color of milky coffee, his hair dark. Nice cock, thick, big, half-hard. He was running his hands through his hair, about to turn off the shower taps when he saw me. We traded glances and he gave me a half-smile. I held up a finger and his smile widened a fraction. I quickly dumped my stuff in a locker, grabbed a lambskin condom and joined him in the shower. His gaze fell on my cock, which was big, hard and ready to play. Fuck, he mouthed and turned around. His face was beautiful, his ass even sweeter. Hands splayed against the wall, water ran down his back and I heard him moan as I tore the package open with my teeth and rolled that rubber over the length of my shaft. I stroked it down, smoothing out the ridges and ran my hands over his ass. His skin was warm. My thumbs reached into his ass crack. Nice and tight. I ran my fingers ran over his hole and he squirmed against them. Shit, he was ready. I inched my cock toward his ass and felt the heat before I was even close. I sliced into him and felt his hole resist, then embrace me. I fucked him slowly at first and he pushed into my hips. I gripped him with both hands, but I didn’t need to worry. His muscular legs were planted firmly on the floor and he wanted to be fucked. I kept one hand on his ass, moving the other around his belly, reaching between his thighs to stroke him off. I like the feeling of a guy coming when I am. I love the way their ass muscles bear down on my cock. Hell, if he’s bringing me heaven, I should save a slice for him. We fucked like we’d been doing it forever. He anticipated every move I made. And yet…and yet it was new and exciting. The thrill of being caught kept me hard until I felt his come spurt over my fingers and splash the wall. My cock was caught in his grip and I shot inside him, my mouth moving to his neck. I wanted to bite him, don’t ask me why. I never want to kiss the guys I fuck, but this one seemed surprised, then turned his face and his tongue ran right across my lips and I thought I would never stop coming. 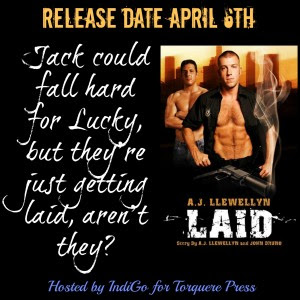 A.J. Llewellyn’s obsession with myth, magic, love, and romance might have led to serious stalking charges had it not been for the ability to write. Thanks to the existence of some very patient publishers, A.J.’s days are spent writing, reading and dreaming up new worlds. A.J. has definitely stopped Google-searching former boyfriends and given up all ambition to taste test every cupcake in the universe to produce over 200 published gay erotic romance novels. A.J. wants you to read them all. A.J. can be found lurking on Facebook and Twitter—part-time class clown being another occupation. When not writing or reading, A.J.’s other passions include juggling, kite-boarding, and spending a fortune buying upgrade apps for Pearl’s Peril and Farm Heroes Saga.