Smashing the Spotlight Tour and Giveaway #ARe #Infamous

Sometimes the moon shines brighter than the stage.

Connor ‘CJ’ Lamont is at the top of his game playing the bad boy of country music. The problem with his ultimate redneck persona is that… well, he’s not. CJ is a wickedly smart songwriter and musician who suffers from an excess of personality. He lives, not for the spotlight, but for the three months of downtime each year when he can finally be himself.

Sexy werewolf Lee Mills is hired as CJ’s new security to keep him safe and assure that he stays on the medication he’s been on since birth. But when Connor’s parents see sparks fly between their son and his new security guard, they are intent on keeping the wolf at bay. Of course, Mills isn’t used to taking orders, at least not from anyone who isn’t his pack alpha, and he has no intention of following the rules.

In fact, if Mills has his way, he’ll be smashing the spotlight and showing Connor the moon. 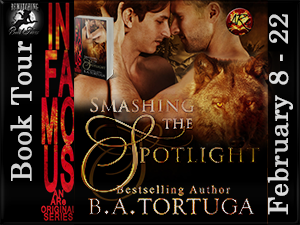 Connor did his market shopping—shrimp, rum cake, and root veggies and those neat little brown sugar candy deals—before heading out to the beach house. It sat there like a faded jewel, the turquoise paint beaten down by the sun. It was little, simple, nowhere a famous asshole would live.
Connor loved it.
All he had to do was eat and swim and lounge in the sun. Oh, he had his guitar and in a few days the itch to write would be on him. For now, though, he wanted fruit. Rum.
He dumped the food in the fridge, poured himself a piña colada and headed out to his chair to soak up some sunshine.
Connor stopped short when he saw the long, well-muscled man who was stretched out on a tiny air mattress across from his lounger. “Hope you got enough food for two people,” the guy said, sitting up and running a hand through a shock of dark brown hair.
“This is private property, dude. It’s posted.” Connor wasn’t stupid. He knew this was security man, but he wasn’t fucking at work.
“I know. Not a bad setup. I can work with it without losing any of your aesthetic.”
He turned without a word and went back inside, locking the door behind him. He could call the police, but that seemed less than fair. This guy was working, doing his job. He could give it a day or two, see if the guy gave up. He could find another place, maybe another beach.
Christ.
He just wanted a break.
The door opened seconds later. “Nathan gave me a key. Look, I’m not here to make your life shit. In fact, I’ve gone over all the scenarios and decided not to hire a team like they want me to. As far as anyone knows, I’m a buddy of yours down on vacay with you. Hence the beach get-up.”
Connor glanced at Mr. Security again, who looked like something out of the International Male catalog in a pair of soft linen pants and nothing else. His accent, though, that was pure Deep South.
“I didn’t hire you. Just go home, tell my mom I’m fine, and collect your paycheck, man. I won’t tell anyone.”
“Yeah, and if you got shot or messed up or something, I would never work again.” The guy stepped up into his personal space and thrust a hand at him. “Mills.”
He shook instinctively, then pulled away. Nathan wasn’t his buddy anymore. In fact, he hoped Nathan’s retirement sucked. Okay. Connor was going to his bedroom and then he was going to create a plan that didn’t involve having a babysitter.
He was a smart dog. He could do this.

B.A. Tortuga Texan to the bone and an unrepentant Daddy's Girl, BA Tortuga spends her days with her basset hounds, getting tattooed, texting her sisters, and eating Mexican food. When she's not doing that, she's writing. She spends her days off watching rodeo, knitting, and surfing Pinterest in the name of research. BA's personal saviors include her wife, Julia Talbot, her best friend, Sean Michael, and coffee. Lots of coffee. Really good coffee.

Having written everything from fist-fighting rednecks to hard-core cowboys to werewolves, BA does her damnedest to tell the stories of her heart, which was raised in Northeast Texas, but has heard the call of the high desert and lives in the Sandias. With books ranging from hard-hitting GLBT romance, to fiery menages, to the most traditional of love stories, BA refuses to be pigeon-holed by anyone but the voices in her head.

For more information on other books by B.A., visit her official website: www.BATortuga.com

This book was a great foray into MM romance. It kept my interest as Nathan fell for Connor and helped him out of his shell. Hot and copious sexy scenes, shifter action and more await the reader on this journey. I want to go hang with Mama Cherry and listen to some music after this one. Awesome read.

2 winners to receive two eBooks from Are books.
a Rafflecopter giveaway
Posted by Erzabet Bishop at 4:00 AM