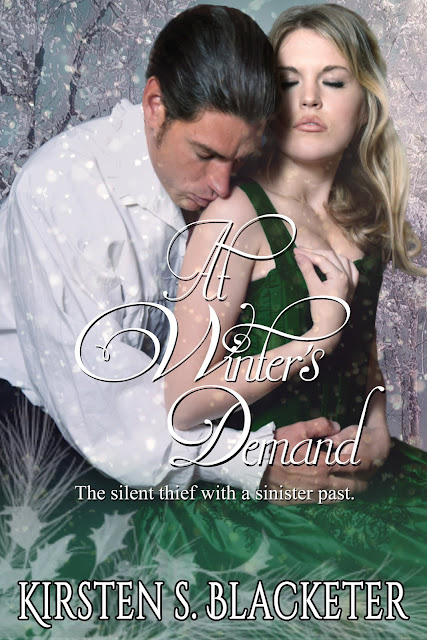 At Winter's Demand
By
Kirsten Blacketer

Blurb:
A spirited country girl at the mercy of a silent thief harboring a dangerous secret.
Working at the inn Judith fears a constant state of boredom. One snowy night, three strange gentlemen appear and topple her quiet haven into chaos. The leader kidnaps her sister, leaving her under the stern eye of his silent compatriot. Her sister had warned her one day she'd cross the line. With him, that doesn't take more than a frying pan to the head.
Simon detests disorder. Edmund charged him with one mission: find the jewels. But he never counted on a feisty, curvaceous hellcat standing in his way. She demands to be reunited with her sister in London, and Simon is more than willing to leave her on his friend's doorstep. When she's kidnapped at King's Cross Station, he must summon all his unsavory resources to find the woman who unwittingly stole his heart.

Excerpt:
As she washed the handful of dishes, Judith lost herself in thought. When the door to the kitchen swung open, she jumped and spun around, nearly dropping the bowl in her hand. She pressed a soapy hand to her chest to still her fluttering heart and glanced up.
The silent stranger stood in the center of the room, his gaze slowly moving along the walls. It slid past her without hesitation. Judith frowned.
"You're about to drive me bloody insane," she said through gritted teeth before turning back to her task. She finished the rest of the dishes, dried them, and put them away.
He never wavered from his task. When she passed him to put the pot on the shelf, his gaze fell on her for a brief moment. Before she could even discern the color of his eyes, he turned his back to her.
"Bloody knob," Judith swore as she passed him again. His scent of leather mingling with notes of tobacco and vanilla blended with the familiar aroma of baked bread. Stopping behind him, she suppressed the urge to bury her face in his coat. Her eyes drifted closed, and she inhaled, drawing the scents deep, letting them linger.
When she opened her eyes, a pair of smoky hazel eyes stared at her. The faint shadow of a beard highlighted his jaw. His sharp features accentuated by the way his black hair slicked back into a queue.
"Fetch me some of that stew."
Judith blinked twice, unsure if she heard him correctly or not.
"You can talk. Saints above, would it hurt you to polish your manners?" She pushed past him and reached for the ladle. Her hand hovered over the spoon, and then she dropped it to her side to hide the tremor. Her heart hammered in her chest as she turned back to him and met his cool expression with a scowl.
Judith propped her hands on her hips. "Tell me where my sister is first. You can at least do that much. I deserve to know where she is and if she's even safe..." The words died on her lips as he reached into his coat pocket and withdrew a dangerous looking silver pistol.
"The stew, and bread too." He leveled the barrel at her and cocked the hammer.
Judith swallowed the scream clawing at the back of her throat. With a nod, she ladled the stew into a large bowl and cut a loaf of bread in half. The knife nearly slipped from her grip. She pinched her eyes closed for a moment, refusing to look up and see the hollow barrel pointed at her head. Once she set the meal on the counter before her, she backed away without a word and wiped her hands on her apron in an attempt to hide their trembling.
He uncocked the revolver and slid it back beneath his coat. Without another word, he picked up the food and retreated into the parlor.
When the door swung shut, Judith dropped boneless to the floor. Her heart hammered in her chest as her hands shook.
A gun! He pointed a gun at me. She buried her face in her hands and felt the hot tears against her palms.

2. Plotter or pantser?
A mix of both. I like to have a basic outline of what needs to happen in each story and where the characters need to be by the end. But how they get there, I let them lead me. So I keep the scene outlines pretty general to let the characters fill in the details.

3. What are three things you have on your writing desk?
Coffee or tea. Notebook with pens. Pictures of Chris Evans and Tom Hiddleston.

5. Tell us a little about your new release. What character in the book really spoke to you?
My new series is set in Victorian England in 1896. At Winter's Demand is the second book in the Thieves of Winter Series. Jewel of Winter being the first book. They're both novella length stories sitting between 25-30,000 words. So a comfortable read but nothing too intense. Jewel of Winter is Edmund's story, but At Winter's Demand focuses on Simon's adventure.
It's quite funny that you ask who "spoke to me" in this story. Simon is an extremely strong presence in this story. But he's silent much of the time. The strong silent type, I guess you could say. Judith, his heroine, is a chatterbox who continually antagonizes not only him, but those around her. She has no filter. So their story is full of humorous moments and fantastic tension.
I don't want to give too much away, but I can say...if you haven't read Jewel of Winter. I would suggest reading it first...then At Winter's Demand. Each of the stories interweaves with the other because the timelines overlap, however each book focuses on a different couple.

7. What is your favorite type of character to write about?
I love sassy heroines and bold alpha males, doesn't matter the time period. Every one of my characters are independent and confident in some aspect of their lives.

8. What is the sexiest scene you ever wrote?
Edmund's scene in the study from Jewel of Winter. He's such a dominant man. Everything he does is sensual.

9. What advice would you give new authors in the erotica/romance field?
Write for yourself first and foremost. Write what you love and be true to yourself.

10. What is next on your writerly horizon?
I'm working on editing the third book in the Thieves of Winter Series, Under Winter's Control, which will be releasing around June of this year. I'm also editing my next novel, Mississippi Moonshine, which is set at the end of the prohibition era on the Mississippi River.
Not sure what projects I'll be taking on after that. I'm always on the lookout for inspiration. *wink* 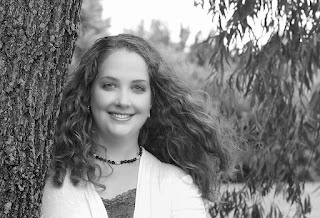 Author Bio:
Stick her in the middle of a chaotic home with two children, a hyperactive dog, and a camouflage-wearing husband, and she can cook and clean with the best of them.  But when the sun goes down and the children are nestled in bed fast asleep, she tucks away her pots and broom and like Cinderella she transforms.
Her characters creep forth from the dark recesses of her mind taking their places in the castles and forests built from her words. No simpering heroines linger there with forlorn gazes turned to the horizon, waiting for their Prince Charming. They straighten their spine, arming themselves with blade and bow, prepared to do their part in defense of their honor and destiny. She breathes life into the women she believes our ancestors to be, showing how they lived and loved with passion and grace.
Never bored by the tales still left to tell, she battles the ever-sarcastic muse in her quest for romance.