Tantalizing Tuesday: D D Symms and In His Sights 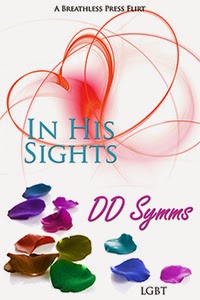 And we meet again so soon! Here we are with another tasty tidbit. Let's welcome D D Symms to the blog today as we dish the dirt on
In His Sights.


1. How did you start writing erotic romance?
About 5 years ago, I wanted to explore the sexual tensions that reside in us. I feel that In His Sights deals with primarily hurts and losses we experience and how the erotic aspects of love and acceptance heal our wounds.
2. Plotter or pantster?
I'd say 60 percent pantser. Often, I'll jot down a rough outline and then it changes as I dive into the story. I do make myself write up key character descriptions, though.
3. What are three things you have on your writing desk?
Only 3? A cordless phone I don't use, a mini-water fountain that doesn't work and a stack of post-it notes and a homemade paper weight one of my kids made. Okay, that's 4. I won't count the loose papers!
4. Favorite food?
Ciopinno – the Italian seafood stew. Mmm, love the flavors.
5. Tell us a little about your new release. What character in the book really spoke to you?
Dalton Blake is blaming himself for his lover's death in Afghanistan and the hurts are beginning to engulf him and take him to a dangerous place of no return to society. I've had those similar types of hurts in recent years due to deep family conflict and Dalton's realization came alive to me.
6. I write because ____...
I have stories that I'm dying to tell and the inner workings of characters I want to explore.
7. What is your favorite type of character to write about?
A person overcoming struggles and overcoming self-doubt. Perhaps because I see so much of myself in that way.
8. What is the sexiest scene you ever wrote?
The male-male pool scene at the end of In His Sights or perhaps an outdoor love making scene in Getaway where the hero and heroine have come together on mossy soil near a stream in the mountains.
9. What advice would you give new authors in the erotica/romance field?
A hot story is about the characters in the story and the erotica and sex flows from the connections the characters make. It may sound odd but you should be able to take away the sex and still have a story and use the senses, details, to heighten the erotic aspects of the story such as a touch or a gentle kiss. Let the erotic emotions sneak up on a reader.
10. What is next on your writerly horizon?
I'm writing a non-fiction series on entrepreneurs and novel-wise I've got a couple going. One is a follow-up to my novel Boarding. It stalled on me temporarily. 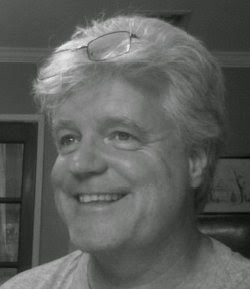 Author bio-
DD Symms likes to capture the emotional struggles of loss and new love in his writings.
Fiction writing in university was his original calling but took a detour of many years as he focused on journalism. The joy of writing fiction is when characters seep into his imagination and take on a life of their own with a story that must be told.
He lives in southern California and hikes in the mountains with his wife, wishes his dog would stop sleeping on his side of the bed, and would like to take more walks along the beaches north of Malibu.

Blurb-
Dalton Blake and his lover from college enlist to serve their country and seek adventure. A roadside explosion in Afghanistan that Dalton believes he could have prevented takes his lover's life and Dalton returns stateside withdrawing into his own world to escape the emotional toll. A base captain tries to break through and must find a way to connect before Dalton makes a tragic decision. In His Sights explores the impact of loss and the hope that new love offers.

Book excerpt-
Shafter took a few quick steps and dove with his arms outstretched into the pool's deep end. He dipped well below the surface and came up for air, shaking his head. "Man, that feels good."
Dalton followed. Pockets of cool water mixed with the warm and sent a tingle along Dalton's back. He surfaced and brushed water from his eyes. A sense of relief encompassed him.
Shafter lifted himself out of the water, sat on the wall and dangled his legs in the water while he reclined on his elbows and looked up. "The stars are beautiful, aren't they?"
Dalton rotated his arms and legs to tread water until he bolted for the wall in a frenzy as though a bee had stung him. An urge to grip the side and hang on or be swept back into the pool caused him to gasp for air.
"You okay?"
Dalton took a deep breath. "I thought I was. For a moment, I actually thought I was okay." A panic attack had ambushed him.
Shafter reached out and Dalton grabbed his hand as the captain helped him out of the water.
"Sorry." A sense of foolishness crept through Dalton.
"For what?"
Light shimmering from the water and the canopy of stars eased the stab of emotional pain. Shafter's acceptance with his question and calm tone was an even deeper balm. Dalton smiled. "For acting crazy." The captain's patience and subtle persistence was a lifeline that Dalton hadn't recognized until now. "Thank you." But it could happen again. Panic could strike at any moment. Dalton tensed until Shafter laid a hand on his shoulder.