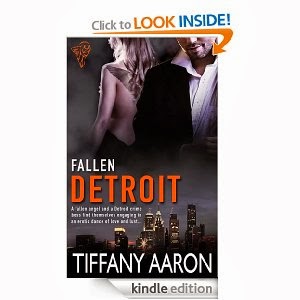 Book One in the Fallen series.In a search for a serial killer, a fallen angel and a Detroit crime boss find themselves engaging in an erotic dance of love and lust.In punishment for rebelling against God, Celeste is banished from Heaven. She has spent centuries on earth trying to keep mortals safe from those of her brethren. As an Enforcer, she still does what she can to protect the innocents from the evil in the world.Adam Montgomery lives on the wrong side of the tracks in Detroit as the head of a crime syndicate. He’s crawled his way to the top, and nothing will keep him from getting what he wants. And what he wants is Celeste.Yet as they try to track down a serial killer who’s more than human, Celeste and Adam discover they are in danger of losing more than their lives. They could lose their hearts to each other, but is their trust enough to survive Celeste’s secret?

This book started out great but faltered a little in some of the things Celeste's character does. Her interaction as a succubus (and fallen angel) with a crime boss in order to track a mentally ill fallen angel comes with a price. She is willing to pay, but some things don't come cheap. When you fall in love for real, there can be consequences in Heaven and Hell.

One thing I loved about this book was the story line. It was great. The back story was well thought out and the characters were good. On only a couple of occasions there was an issue with suspension of disbelief that detracted from the story (at the beginning when Celeste lets Adam touch her-it didn't fit the scenario) but overall, I enjoyed the story so much I immediately started reading the second one. 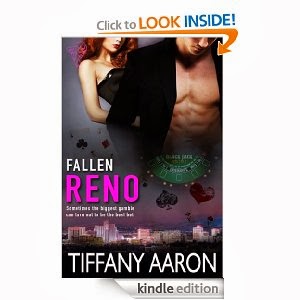 When the rebellion in Heaven occurred, God banished those angels who stood against him. They’ve lived on Earth for centuries, doing all they could to survive without going insane. Some continue to protect mortals at all costs, while others just want to blend into the world around them.

The Fallen struggle to find balance between the desire for what they lost and the love they stand to gain if they stay on Earth.

Sometimes the biggest gamble can turn out to be the best bet.William Bradford is a Fallen angel and a professional gambler, living in Reno while trying to keep the people who visit there safe from his insane brethren. Something’s lurking in the shadows of the city, and William needs all his power to find the truth.Abigail Hanson deals blackjack, but she hates gamblers, and William Bradford happens to be one of the best. She doesn’t understand why she’s attracted to him, and why she’s willing to overlook his profession.There’s more to William than Abby could ever guess, but when danger comes calling for her, she’s glad he’s around to keep her safe.

The story line for this book was just as good as the first one, but the point where William tells Abby what he is was a little too neat. Any normal girl would have freaked and this one didn't. The story backtracks and tries to cover for it, but that needed to happen at the first conversation to make it stick a little better.

The dream scenes were smokin hot and I loved them. It paved the way for Abby to lust after William so he could keep her safe from the demons chasing her through a rabid customer at the casino where she works. Great action, hot sex scenes and more celestial chess playing made this a good read. Looking forward to the next book in the series.