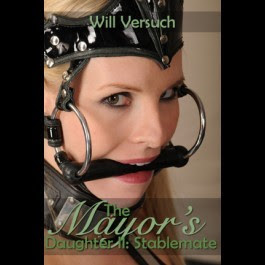 Jessica has finally passed her challenge, elevated from draft pony to show pony. She still struggles to come to terms with this new life, a life where her waking and sleeping life are filled with bondage, confinement, and punishment when she breaks the rules. She knows, though, that it will be a better life now that her days as a draft pony are behind her. But this all changes when a new girl is brought into the Officer's mill. For now, the new girl is the draft pony, filling the role that Jessica left behind. But for how long? Jessica can quickly see that the new girl is stronger than her, faster than her. In a fair competition, Jessica knows that she would lose. What will Jessica do to ensure her place as the show pony? How far will she go to protect her newly won status?This book, the second installment of The Mayor's Daughter Trilogy, features strict bondage and pony play as Jessica and the new girl struggle within the confines of the Officer's mill. It picks up right where the last book ends off, exploring Jessica's new life as a show pony. Fans of the first book will find the same level of detailed, intricate bondage in the sequel, but with the added psychological element of the interplay between Jessica and the new ponygirl.

This book picks right up where the first one left off. Jessica has finally gotten to show pony status, when a new girl is brought in. She experiences the same torture and induction that Jessica went through and has now taken on the spot of draft pony. The extreme SM in this book is more intense than the first one. The Officer character takes things to a much higher level of extreme behavior to the point where I squirmed in my chair a bit, and not for the usual reasons. Pain and pleasure are one thing, but this scenario had a non-con element that could very well disturb some readers. That being said, the story sucked me in and I found myself cheering for the girls and having to know what came next.

This is a very intense read that will suck you in. Be prepared that the pony play in this series is very intense and the Officer picks people that will not be missed and are in need of correction. Not everyone will agree on the level of non-con that is acceptable, but in this case as a total fantasy scenario it works.